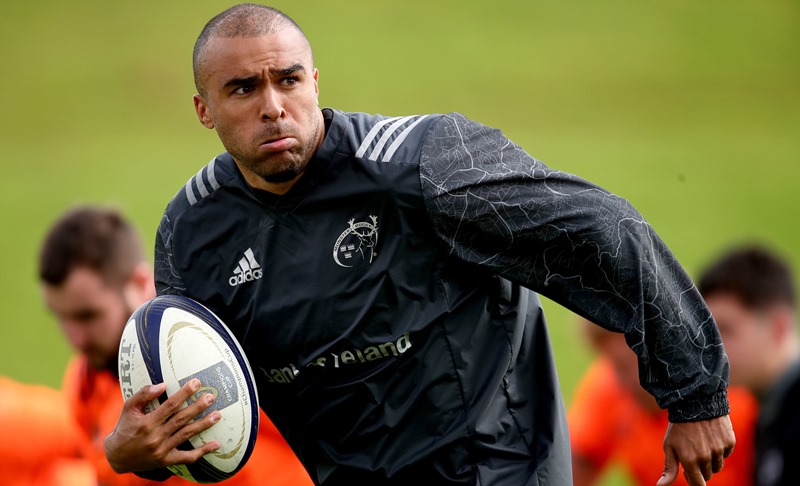 Zebo confident Munster squad is even better than last year

Munster lost just three of their regular season games in the Guinness PRO14 last year and winger Simon Zebo is confident that the squad is even stronger this time around.

The three-time PRO14 winners suffered a surprise first defeat of the year at the weekend as Zebo made his third substitute appearance of the campaign.

Munster will be looking to get back on track in the league against Cardiff Blues at Thomond Park before their big interpro derby against Leinster on October 7.

And 27-year-old Zebo is confident that the depth in the squad and subsequent competition for places will see the side return to winning ways sooner rather than later.

“They’ve taken their opportunities and it’s very exciting for us as a squad and hopefully now the internationals are coming back and fighting for their places.

“It’s really important you’re able to rotate the squad and not lose any quality and I think we’ve seen that.

“Any player that’s been playing while the internationals return to training have really stepped up their standards and the squad is in a much better place than it was this time last year.

“There’s a lot of players playing really well and it’s hard to pinpoint one player but I think it’s a great thing we have, the squad mentality and the performances have been excellent.”

Zebo has been a key member of Joe Schmidt’s Ireland side in recent years and was one of the more experienced players on their summer tour of USA and Japan.

It meant the winger’s season didn’t finish until deep into June and he’s been brought back into the Munster fold by Erasmus gradually so far.

He scored a try off the bench against the Toyota Cheetahs and is happy to be patient for his chance with Andrew Conway, Darren Sweetnam and Chris Farrell impressing in the back three.

“There’s a big block of games coming up and last season was quite long. I’m getting older, I would play every single game if I could but it needs a bit of common sense,” he added.

“You can’t play every single game so I’m more than happy to assist where I can whether that’s in training or coming off the bench and when I get my chance I’ll be excited to start.

“We have a great strength and conditioning team who manage us on a daily basis and they make sure if there are any knocks or bruises we are not being pushed too hard.

“It’s all about being able to play to the best of your ability on Saturday or whenever the game is. Everything through the week is tailored to maximising performance at the weekend.”