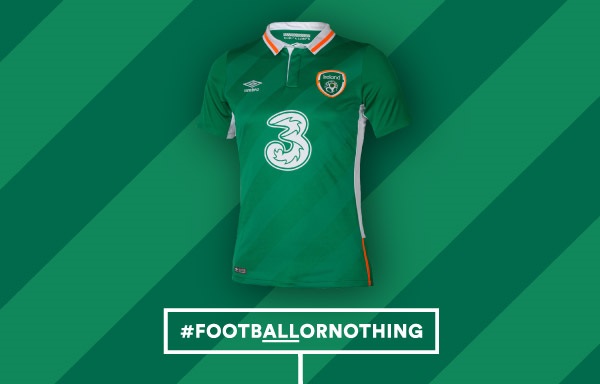 The Irish fans have always added a huge amount to any tournament they travel to, but in terms of what the fans feel their favourite moment was, the homecoming scenes from Italia ‘90 is the stand out one for them (49%).  The two ‘peace keepers’ in Poland, who stood in front of riot police with their “Father Ted” signs, also featured (25%) and the Italia ’90 celebrations on the Crumlin roundabout came in at 11%.

With this in mind, Life Style Sports and Umbro are giving fans the chance to be part of the Ultimate Football Fan Experience by recreating the open top bus tour from Italia ’90 to honour a group of Irish fans ahead of the final home friendly against the Netherlands in the Aviva Stadium on Friday, 27th May. To get involved, all fans have to do is buy an Ireland jersey in Life Style Sports between now and May 22nd and they will be entered into a draw to win tickets and a chance to be honoured on the open top bus, just as their heroes were back in 1990.

What Would Fans Sacrifice?

When fans were asked what they would sacrifice to support the lads in France 28% of those surveyed said they would miss their own wedding, 22% said they would call into work sick, and 19% admitted they would skip a big birthday or occasion of a family members or close friend.

One respondent confessed that they have already given up their job while others said they would skip their leaving cert or college exams. We all know how serious the Irish take GAA and particularly the championship season, with one fan confessing he’d go as far as skipping his hurling championship game to travel to France to cheer on the Boys in Green. One of our country respondents admitted he would also consider missing silage season!

Irish fans definitely love a tune, and with 33% of the vote, Come on you Boys in Green and Olé Olé Olé are in joint first place as the Irish fans favourite chant.  Other chants listed as favourites among the fans were Stand up for the Boys in Green (15%) and We all Dream of a Team of Gary Breen’s (10%).

While there are many fan chants, there are also plenty of songs created around Irish football and of those, Put ‘em Under Pressure is by a long way the fans favourite (53%).  Give it a Lash Jack is also one that fans are fond of receiving 31% of votes.

When the fans aren’t singing they’re being creative designing quirky banners. A bunch of dedicated fans who travelled to the Euros in Poland in 2012 have been selected as the fans first choice for the work of art they created letting Angela Merkel know that they were not in work (30%). Other banners that featured included “F**K the recession, we’re on a session” (27%), “All night Long” (25%), and “Davy Keogh says Hello” (15%).

It’s definitely safe to say that Irish fans are an extremely dedicated bunch, but Dubliner Davy Keogh has been chosen as the supporter of all supporters with 62% of the votes. Others listed include Conor Cunningham (20%) for posing as an Estonian kitman in order to celebrate on the pitch with the Irish squad after securing Euro 2012 qualification, Nathan O’Donnell (8%) who got Jon Walters tattooed on his bum after Walter’s secured Ireland’s place in Euro 2016 and Eddie O’Mahony (8%) who has the largest collection of Irish match worn shirts in the world.

Irish Fans’ Favourite Players and Expectations for this Summer

Roy Keane has been selected as the fans’ number one player of all time to wear the Irish jersey receiving just under half the votes (48%). In terms of players on the current squad, Shane Long is proving the fans’ favourite on 51% of the vote, followed by Jonathan Walters (21%) and Robbie Keane in third place (13%).

Irish Football fans can get their favourite players name and number on the back of their new Republic of Ireland jersey from just €10, instore & online at Life Style Sports.

Irish fans are always an optimistic bunch and almost half of them (49%) expect Ireland to qualify for the last 16 in June, 23% feel that Martin O’Neill’s men will make the quarter finals and 12% of fans believe the lads will do the business in France and become European champions!

To be in with a chance to win a place at the Ultimate Football Fan Experience on May 27th which includes tickets to the Ireland v Netherlands Friendly plus transport to the match on the Life Style Sports Open Top Supporters Bus Italia 90 style, just buy your Republic of Ireland jersey in store or online before May 22nd.