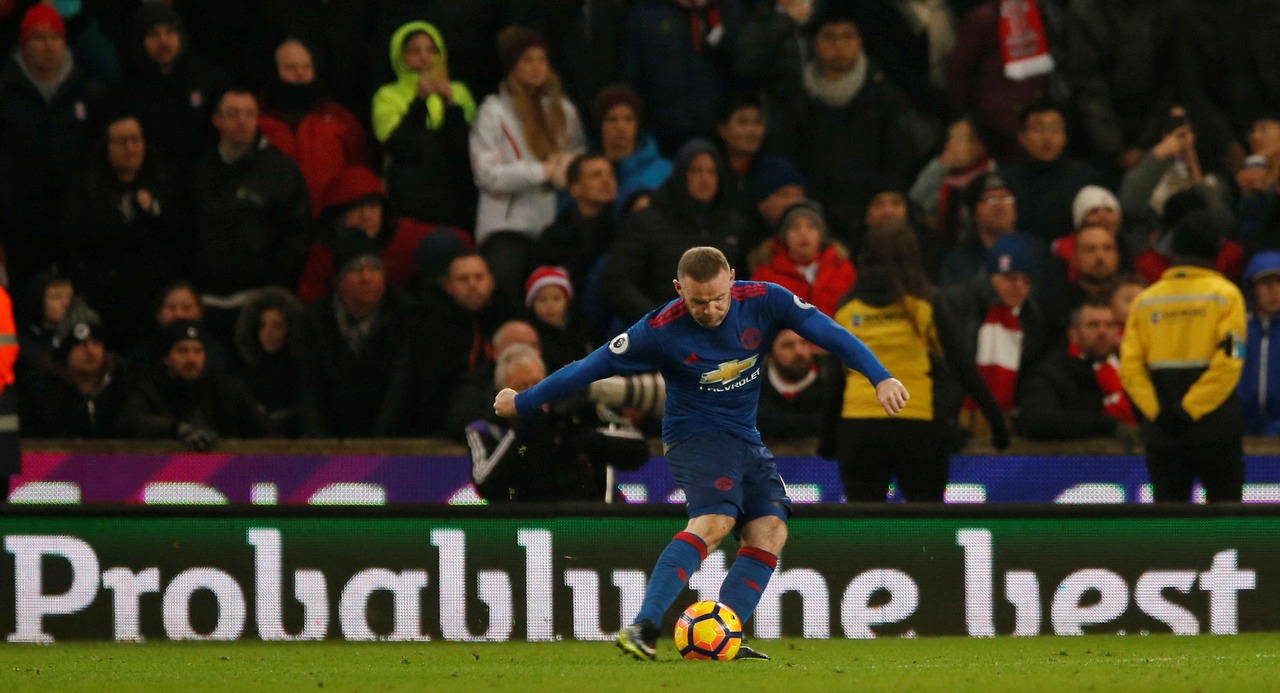 Not only are we pleased for the striker, but now it hopefully means that the cameras will stop cutting to Sir Bobby in the stands every time Rooney crosses the halfway line.

Anyway, it is an amazing achievement and his 250 goals – Sir Bobby had previously struck a mere 249! – deserves plenty of praise.

In true Rooney style he brought up the milestone in some style. There is an old saying in football that goes ‘he’s not a great goalscorer but a scorer of great goals’, however Rooney has been both during his career as we will prove now with our five favourites.

A 1-1 draw at Stoke wouldn’t normally be a reason for Manchester United to celebrate, but Rooney ensured it wasn’t a wasted trip as he surpassed Sir Bobby as the club’s all-time leading goalscorer. And the goal itself was a joy to behold. Not only was it in the fourth minute of injury time, but it was also a sumptuous free-kick that reminded those in attendance that Rooney can still cut it. Rooney lined up a free-kick on the left edge of the box and looked as though he would whip in a cross. But instead the striker curled a fantastic shot past the wall and into the far corner. Cue celebrations.

When a club pays just over £25million for an 18-year-old, it is only fair that fans expect to be rewarded with performances. But if anyone had any worries that Rooney wouldn’t cut it at giants Manchester United after signing from Everton, then all fears were blown away as he bagged a Champions League hat-trick on his debut against Fenerbahce in the Champions League. All three were sublime – a calm finish to open his account, a powerful strike for the second and a delightful free-kick to complete the treble. Rooney had arrived.

Sir Alex: “Wayne thoroughly deserves his place in the history books and I’m sure he’ll go on to score many more goals.” #ROONEY250 pic.twitter.com/GSWBu7wZum

Have some of that

One minute Rooney is arguing with the referee, the next he is unleashing a ferocious volley into the top corner of Shay Given’s net. Young Rooney was apparently incensed that master of the dark arts and elder statesmen Alan Shearer was not being penalised for fouls as Manchester United clashed with Newcastle in the Premier League. And after arguing his case with referee Neale Barry the 19-year-old took his anger out on the ball, thundering a volley in from 20-odd yards.

Have a watch of some of @WayneRooney‘s greatest #MUFC goals.

Manchester derbies are full throttle and all blood and thunder. But Rooney’s goal back in 2011 was a thing of beauty. Ok, we admit it, he shinned it. But if you have seen a better shinned goal then please speak up now. A Nani cross was slightly behind the striker but Rooney adjusted his body and launched himself into the air, scoring a wonderful bicycle kick that left Joe Hart rooted to the spot. You’ve got to shin it to win it (sorry)

Whatever David Beckham can do in the red of Manchester United so can Rooney. Against West Ham the ball bounced invitingly for Rooney and he reacted by unleashing a shot from just inside the West Ham half that bounced over a scrambling Adrian and into the back of the net. It wasn’t quite as good as Beckham’s famous goal against Wimbledon that launched him into stardom, but the sheer audacity of it was something to enjoy.