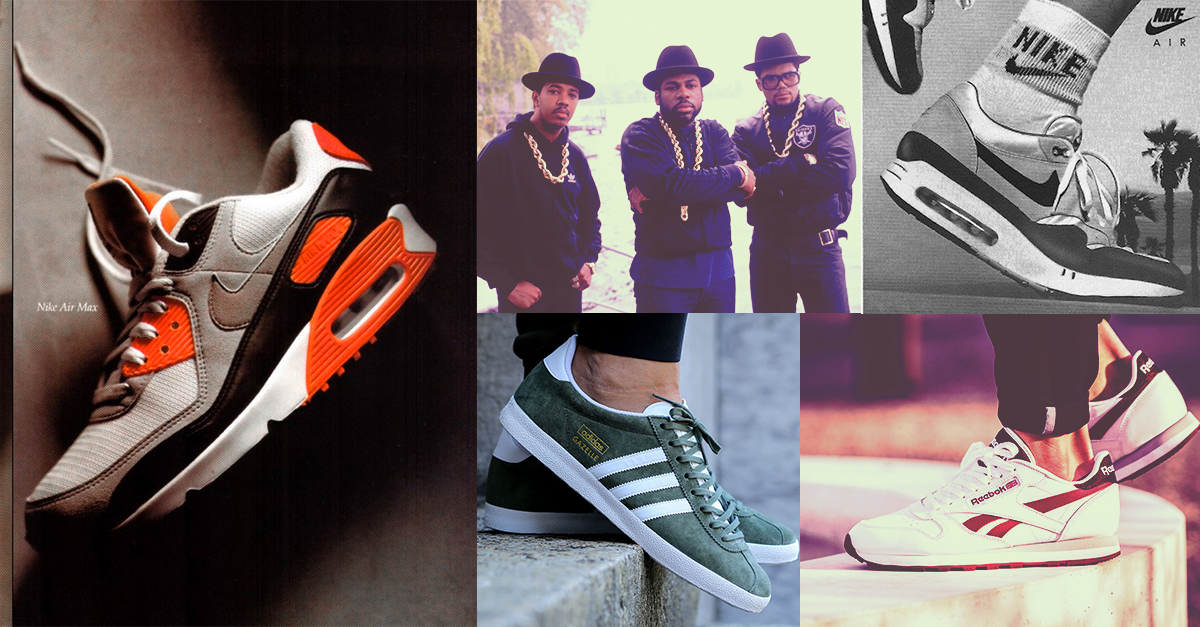 In the 1980s, sneaker culture reached new heights. As rap took over the radio, a generation of hip-hop legends turned Sports Born, Street Worn trainers into must-have style icons. And a craze for fitness took fashion-forward running shoes to another level. 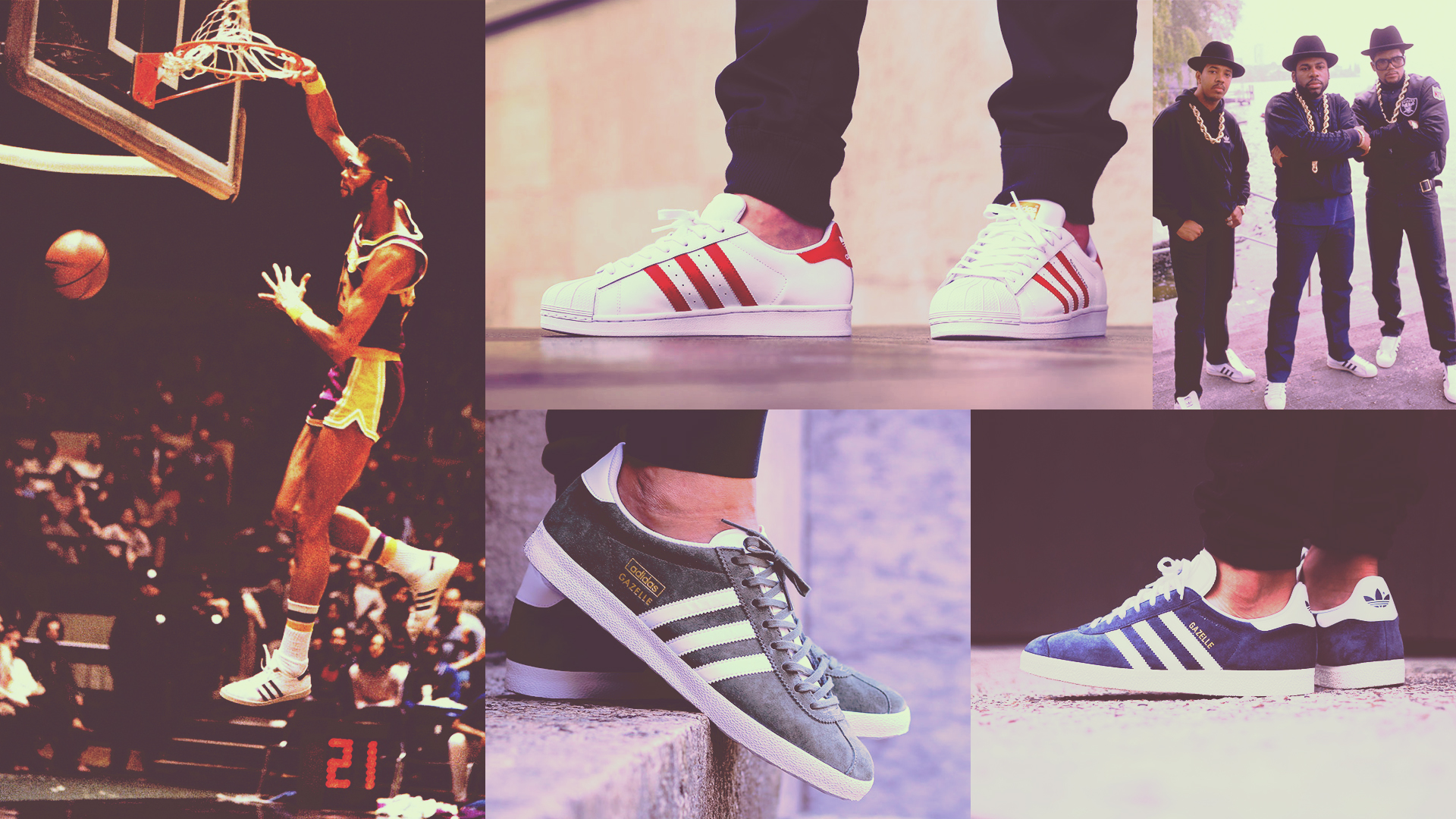 Debuting in 1969, the adidas Superstar was originally a basketball shoe, beloved by players thanks to its robust design and protective rubber shell toe. As a sports shoe, the Superstar peaked in the ’70s, with the legendary Kareem Abdul Jabbar’s (still the highest scorer in NBA history, with a jaw-dropping 38,387 points) preference for the shoe propelling it to #1 spot in the league. However, it took a rap group to make the Superstar a true street icon. In the late ‘80s, Queens-based trio RUN D.M.C were well on their way to becoming the biggest names in hip-hop. The group’s look – black leather jackets and white adidas Superstars worn with the laces undone and the tongues pushed out – was hard-hitting and memorable, just like their music. The group celebrated their love for their Superstars 1986, with the release of “My Adidas”, a smash-hit ode to their favourite sneaks. The song’s popularity propelled the shoe to new heights. And by the end of the decade, the Superstar was firmly enthroned as the definitive hip-hop trainer – a title it holds to this day.

The adidas Gazelle is another Sports Born shoe that became a legend on the streets in the ‘80s – this time in Britain. The Gazelle debuted in 1966, when the shoe’s suede design and vibrant red and blue colourways marked it out from the more subdued athletic shoes that were common at the time. As hip-hop hit the big time in 1980s England, a generation of rap fans looked to emulate the style of street stars like Run D.M.C and the Beastie Boys. Because popular American models like the Superstar and Campus were often unavailable in the UK market, British rap fans improvised by making the similarly-styled Gazelle their shoe of choice. As well as the rapidly-growing rap and dance scenes, the Gazelle took over football terraces where it was an essential part of the match day kit for a generation of “casuals”. And the Gazelle’s popularity continued to go from strength to strength in the next decade, with Britpop icons like Damon Albarn, Noel Gallagher, and Kate Moss all sporting the trainer on a regular basis.

Survival of the Fittest – Reebok Classic 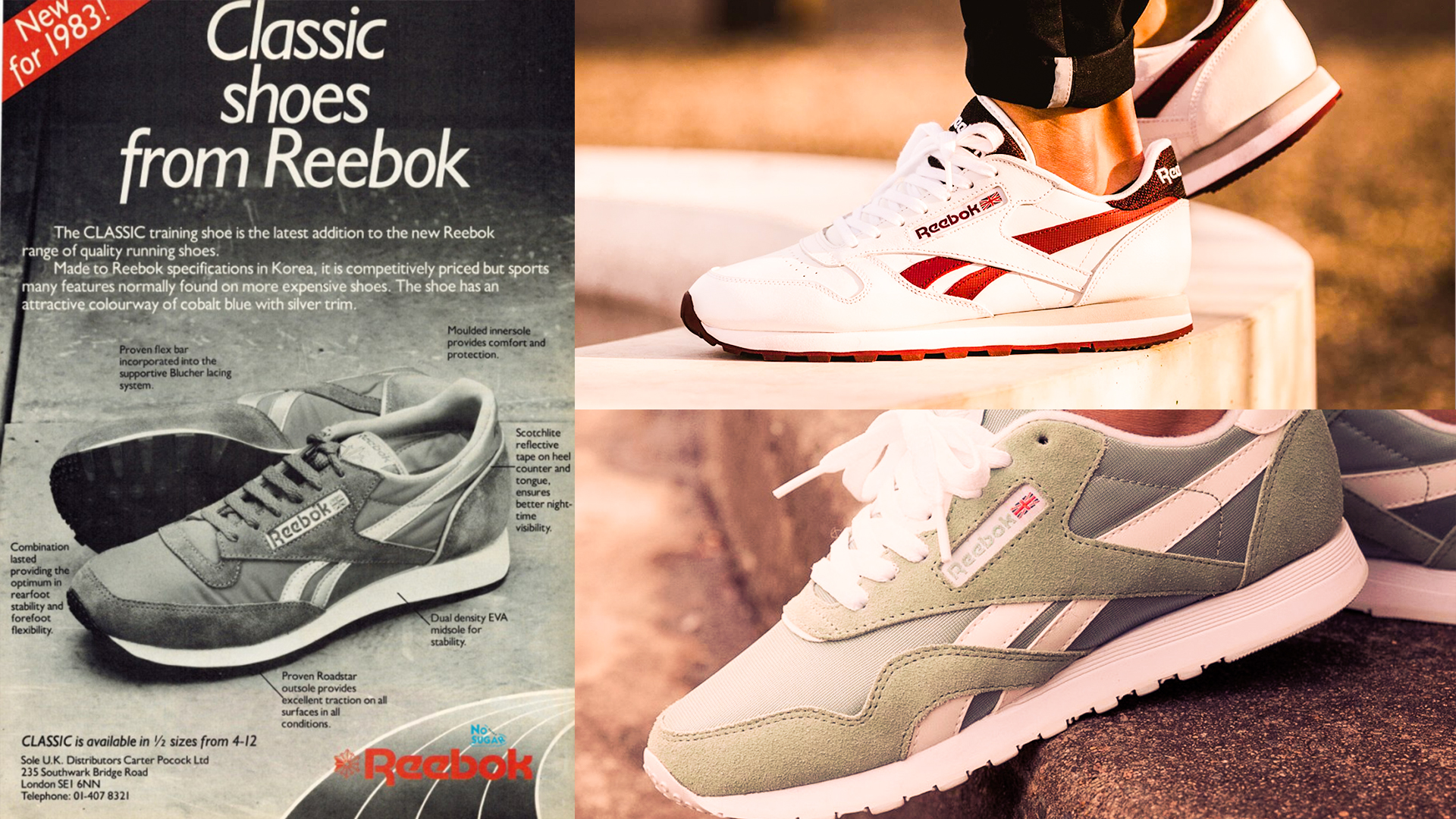 In the 1980s, Reebok was going places fast. The company had leapt on the burgeoning fitness craze and made big strides with a range of shoes that combined comfort and style. Jump to 1983, when, capitalising on its newfound popularity, Reebok created its most iconic trainer yet – the Classic Reebok Leather. The shoe’s simple white silhouette and quality materials differentiated it from other running shoes of the day – where the trend favoured more elaborate designs constructed from synthetic materials – and its Union Jack-featuring logo gave it an exotic air that appealed to Anglophile sneaker fans in the US. The Reebok classic would go on to become an  accessory for a generation of UK dance music fans, particularly in the UK garage scene of the late ‘90s – where a crisp pair of Classic were an essential part of any self-respecting clubbers’ outfit.

Nike has always been a company that pushes the envelope when it comes to shoe design. But if there’s one innovation that epitomises the brand, it’s Air Cushioning Technology. Based on an idea by aerospace specialist M. Frank Rudy, and first seen in the Nike Tailwind in 1979, air technology would define the company in the ‘80s and beyond. And in 1982, Nike brought air to the basketball court with the Nike Air Force 1. Named after the American President’s personal plane, and designed by Bruce Kilgore, the Air Force 1 was a hit when it first appeared but was discontinued in the mid-‘80s. However, the shoe soon began to command massive prices in the reselling market. And Nike responded to public demand by making the Air Force 1 the first ever athletic shoe to be reissued in 1986 – starting a trend for the rebirth of retro sneakers which has dominated the market ever since. 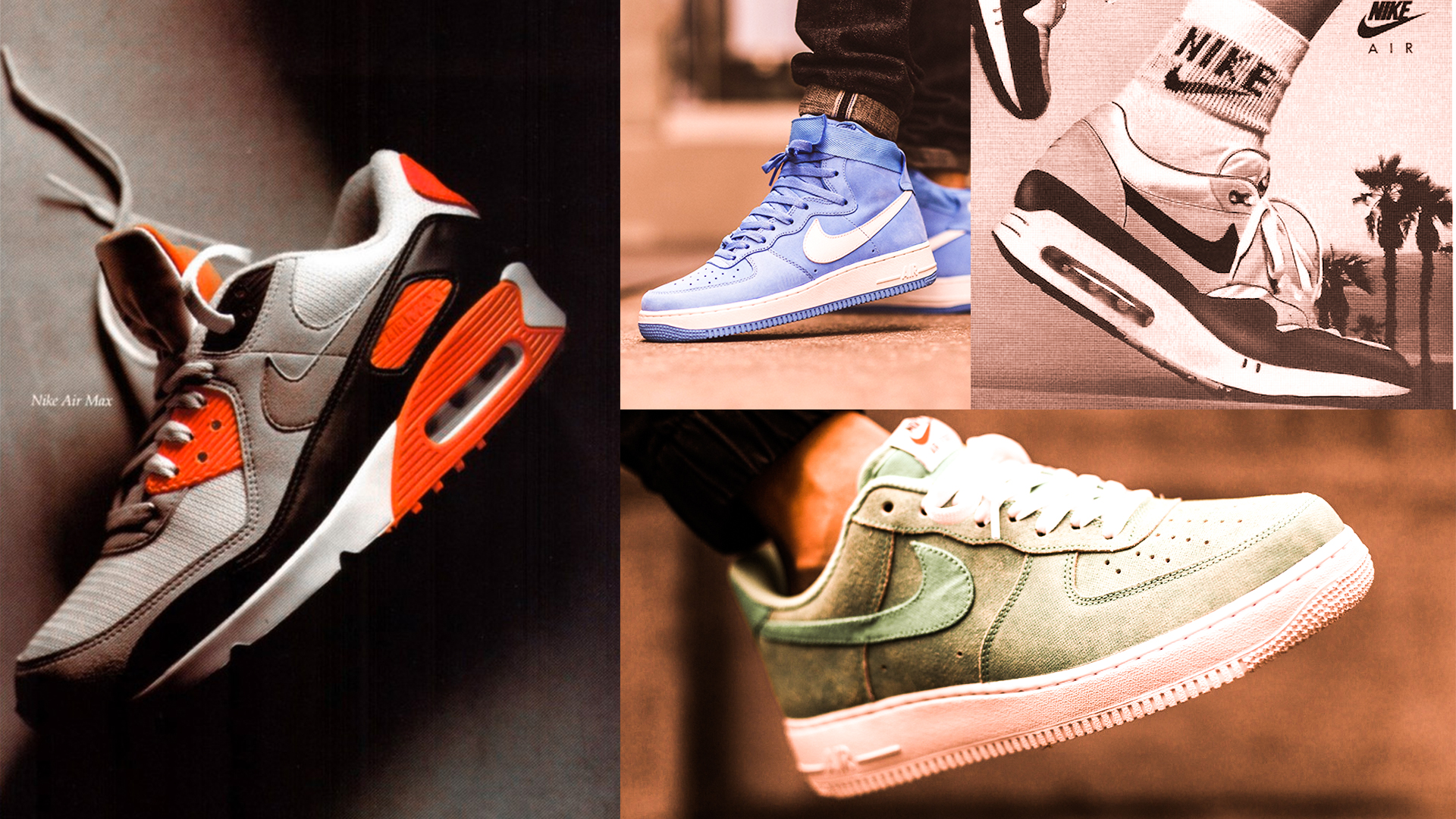 Nike continued to develop their air technology over the course of the decade, and in in the late ‘80s introduced arguably the most important sneaker of all time – the Air Max 1. Sporting a visible air bubble in the heel and a striking red and grey colourway, the original Nike Air Max turned designer Tinker Hatfield into a legend and revolutionised the running market. Hatfield had joined the company as an architect before turning his hand to shoe design, and drew on this training by using the design of the Pompidou Centre in Paris to inspire the Air Max’s “inside-out” construction.

The Air Max debuted in 1987 with a commercial featuring an all-star cast of athletes (including John McEnroe, Bo Jackson and Michael Jordan) and a soundtrack by The Beatles – and instantly became a phenomenon. It’s no exaggeration to say that this single shoe turned Nike from a merely successful company into a global giant. More than any other trainer, the Air Max would fuel the collectables market in the late ‘80s and ‘90s, as a new generation of ‘sneakerheads’ scrambled to get their hands on the most coveted designs. In the decade to come, the Air Max family would expand with the addition of newer, more futuristic models, but the Air Max 1 is still rightly revered as the icon that started a dynasty.

These iconic trainers defined the 1980s. But like all true icons, they’ve been redefined, reinvented, and rediscovered by countless new generations. Become a part of their continuing story. Be Iconic Everyday

THE LATEST RANGE OF ICONS IS NOW AVAILABLE ONLINE & IN SELECT STORE.