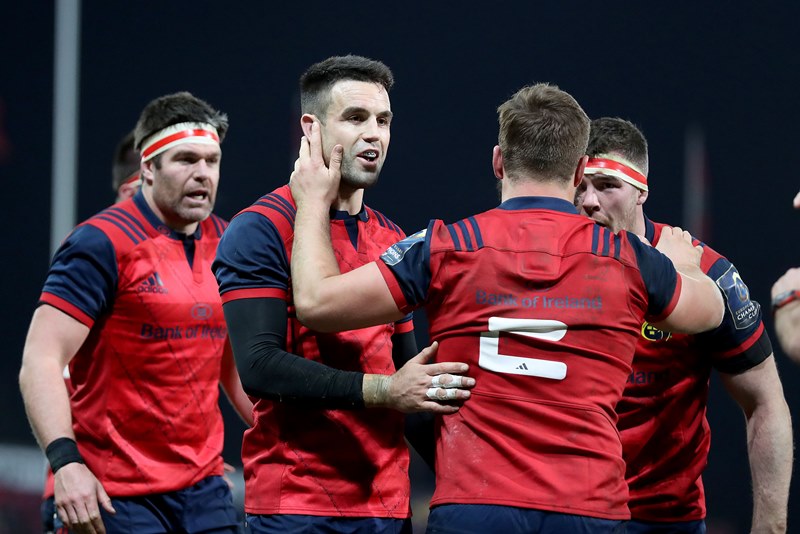 Three players who will be key for Munster at Welford Road

Munster sit proudly atop Pool 4 in the European Champions Cup at the half way point of the group stages as they look for another long run in the competition.

Their 33-10 success over Leicester Tigers means they lead the way above Castres, Racing 92 and the Tigers with two wins and a draw from their opening three games.

A second win over Tigers at Welford Road this weekend would put them in pole position to qualify for the knock-out stages and here’s who we think needs to shine.

With Tyler Bleyendaal out injured, Keatley has taken his opportunity at fly-half with both hands and kicked 13 points in the success over the Tigers at Thomond Park last week.

Adding regular points from the tee is crucial if Munster are to come away from the East Midlands with points – as Ronan O’Gara so famously proved.

Another commanding performance from the fly-half will be necessary for victory number three.

O’Mahony may have scored a try in the win on Saturday but his all-round game, particularly his work at the breakdown, was almost more important to Munster’s triumph.

As well as making 21 metres and two defenders beaten in attack, he also made five tackles in defence alongside his backrow partners of Chris Cloete (14 tackles) and CJ Stander (13).

Having led the British & Irish Lions in the summer and more than 40 Ireland caps, O’Mahony has the big game experience to produce when it’s needed most.

The Munster back row looked incredibly strong on Saturday and could be boosted even further this weekend with the return of Tommy O’Donnell.

The 30-year-old completed a full 80 minutes for Munster A last Friday night in the B&I Cup as he continues his return from a shoulder injury sustained in November.

A welcome return for Munster after a long absence and, if he comes off the bench, has the potential to cause the Tigers serious issues in the loose.