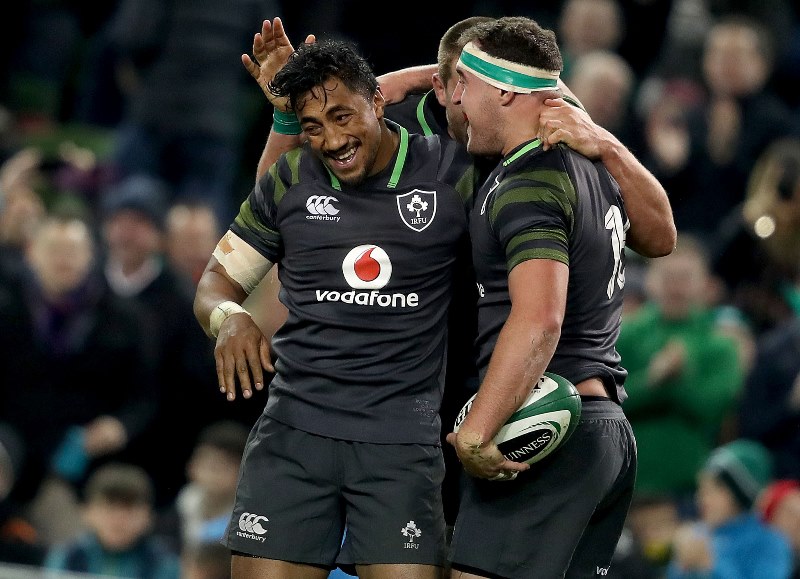 Which three Ireland youngsters could star against Fiji?

Ireland sent a timely reminder of their class and pedigree with a thumping win against South Africa last week.

Unfortunately this autumn we are unable to see how good they truly are with the two best Southern Hemisphere sides, the all-conquering New Zealand and Australia, avoiding a short trip across the Irish Sea.

Therefore, Ireland’s final two games this month are against Fiji and Argentina – both dangerous in their own right but unlikely to send chills down Joe Schmidt’s spine.

Fiji, ranked ninth in the world, lost to Italy last weekend and the suggestion is Schmidt is likely to rotate his team and take a look at some of next generation.

So, here we’ve picked out three players who could get a chance to shine:

Rob Kearney has been at the heart of Ireland’s team for the past decade but Schmidt has repeatedly insisted he will only pick players based on form.

Step forward Joey Carbery, a creditable threat to Kearney’s shirt and a player with a very bright international future ahead.

While Kearney has made just three starts for Leinster this season and missed Ireland’s summer tour of Japan through injury, Carbery has been one of the Guinness PRO14’s stand-out players.

The 22-year-old is equally comfortable at fly-half but with Jonathan Sexton not going anywhere soon, full-back may be his best place in this team.

He has three try assists and has beaten 19 defenders domestically this season, while he has also scored three tries.

With Kearney’s best days behind him, Carbery may be the answer at the 2019 World Cup and Schmidt is clearly a fan – having eased him into the set up gently.

Saturday’s clash with Fiji may be the best time to unleash him.

With Rob Kearney fighting for his place, Tommy Bowe now 33 and Simon Zebo jettisoned from the squad, Ireland’s back line is undergoing change.

In the absence of Keith Earls, it was Andrew Conway and Jacob Stockdale thrust into the limelight and both took their chance with a try each against the Springboks.

But on the bench was another wide man with a bright future and Schmidt is surely tempted to give him a go against the Fijians.

Darren Sweetnam may have been playing in the All-Ireland hurling semi-final for Cork in 2012 but he has blossomed into one of the country’s finest wingers.

The 24-year-old made his international bow against South Africa just two years after his Munster debut and his form this season, with three Pro14 tries in six games, surely warrants a start.

Quick and powerful, he fits the role perfectly and it is only a matter of time before we see more of him in green.

CJ Stander may be the most destructive No 8 currently operating in the Northern Hemisphere but Jack Conan’s form for Leinster means he is banging hard on the door.

The back row is where Ireland have the most options, with Sean O’Brien and Peter O’Mahony keeping a vice-like grip on the flanker spots.

Add in Iain Henderson, Rhys Ruddock and No.8 Stander and the options are queuing round the block.

However, Conan has stood out so far this season despite not being named in the match-day squad to face South Africa.

He has just four caps so far, despite being 25, but expect that number to rise quickly – especially if he gets the chance to face Fiji.