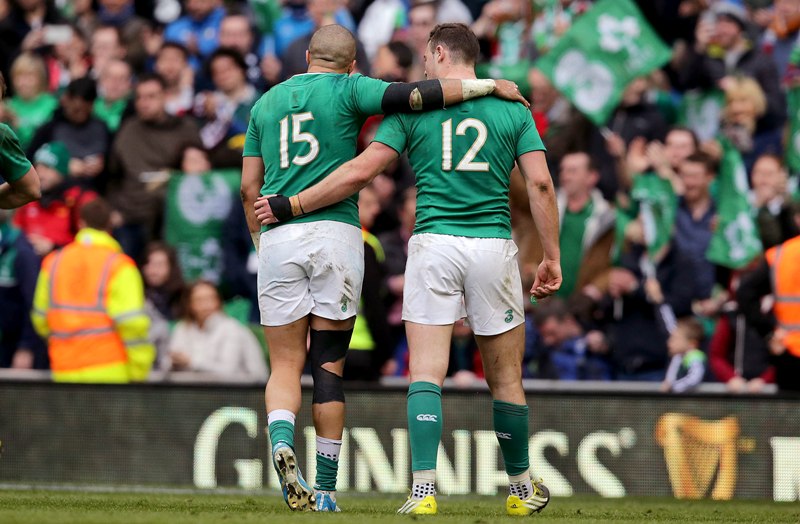 Ireland need to bounce back strongly against Italy this weekend if they’re to have any chance of regaining the RBS 6 Nations title they won back in 2014 and 2015.

And they have an incredible record against this weekend’s opponents Italy with just a single defeat to the Azzurri in the history of the Championship.

Lansdowne Road, Croke Park, Aviva Stadium and Stadio Olimpico in Rome have all hosted classic matches between Ireland and Italy and here we pick out our favourites.

Heaslip’s World Try of the Year

This was a record breaking win for the Boys in Green who scored nine tries against the Italians last year, two of which were scored by Jamie Heaslip.

But it was Heaslip’s first effort, at the conclusion of the first half, which will live long in the memories of those who witnesses it with it later being award World Rugby try of the year.

With Ireland in their own half, the ball was shipped wide to Simon Zebo who gave an incredible offload out the back of his hand to Jared Payne who lobbed the ball inside to Jonathan Sexton.

Sexton found Andrew Trimble who offloaded to Fergus McFadden who eventually fed Heaslip for the fourth try of the match which put Ireland 25-3 up with the conversion to come.

Irish legend Brian O’Driscoll made his final international appearance on Irish soil against the Italians in a comfortable victory in the 2014 RBS 6 Nations.

O’Driscoll went on to help Ireland lift the title on points difference from England with a two-point win over France in the final round.

The narrow nature of their title success made this seven-try success over the Italians all the more crucial as Sexton scored two tries, one of which was created by O’Driscoll.

Cian Healy, Cronin, McFadden, McGrath and Trimble all made it over the whitewash as O’Driscoll became the northern hemisphere’s most capped player with 140 international appearances.

Ireland achieved just their second Grand Slam in 2009 and their 38-9 success in Rome in Round Two was another step towards that historic success.

After slipping to a 6-0 deficit, Tommy Bowe and Luke Fitzgerald tries before half-time put the Irish in firm control.

David Wallace added a third with Fitzgerald and O’Driscoll also crossing in Rome before Ireland sealed the dramatic Grand Slam with a 17-15 win over Wales.

Let’s hope for a similarly convincing success against the Italians this coming weekend.