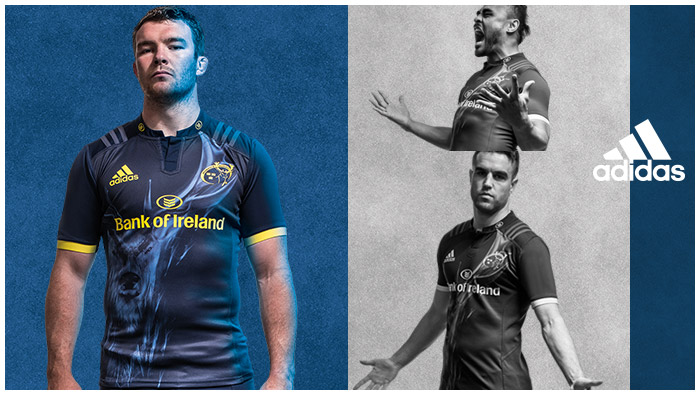 Munster Rugby players Simon Zebo, Keith Earls, Francis Saili and Andrew Conway were on hand to launch the new alternate kit in Life Style Sports, Mahon Point, Cork, which was transformed in to a mock rugby dressing room for the day.

Pre-order fans and Munster Rugby Supporters Club members were treated to a meet and greet in-store with the players, after listening to them look ahead to the new season with Red FM’s Lisa Lawlor.

The alternate jersey is navy with a striking yellow trim and celebrates the significance of the Munster stag, an animal which in Irish folklore is always portrayed as defending its own territory.  One of the great Munster families, the McCarthy’s, who trace their origins back to the Carthach, the 11th century Prince of Munster, also had a stag on a shield of metal grey as their crest. The McCarthy motto, “to the brave and faithful nothing is impossible“, was adopted by Munster Rugby, summing up their resilience and determination.

Tasked with producing an innovative kit that performs with the players on the pitch, adidas has developed a set of standards based on an ‘only the best for the athlete’ ethos. The jersey has been designed to allow each player perform to their maximum ability in any environment and against any opponent.

This is the first year of an exciting new five year exclusive retail agreement between Life Style Sports and Munster Rugby, which sees the Irish owned sports retailer acquiring the global rights to retail licensed Munster Rugby kit and accessories.

Commenting at the official launch, Munster Rugby Commercial and Marketing Manager Enda Lynch said: “adidas have once again led the way in design and innovation in marking the province’s heritage through the image of the stag and in returning to our more traditional navy alternate colours.

The new alternate kit is a first of new beginnings for Munster Rugby as we embark on our exclusive partnership with Life Style Sports and adidas.

With stores located throughout the province and beyond, matched by a leading digital platform that supports our online needs the Munster brand and adidas range is accessible to a global audience.”

The team will wear the kit for the first time in August during Munster’s pre-season campaign.