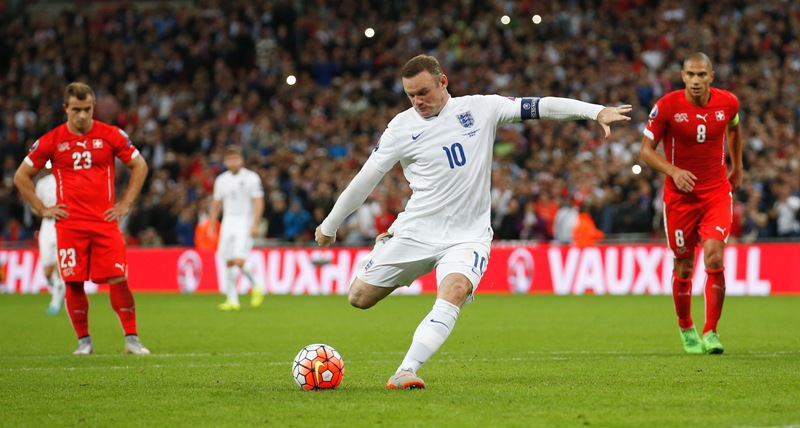 After hitting his record-breaking 50th international goal on Tuesday night, debate turned to whether Wayne Rooney is indeed England’s greatest marksman of all time.

Some question whether the Manchester United man should be talked about in the same breath as Sir Bobby Charlton, Gary Lineker and Jimmy Greaves, to name but three of England’s best before him.

But defender Gary Cahill says Rooney’s peers do not doubt him for a second.

Following the 2-0 victory over Switzerland, in which he blasted home a penalty to bring up the record, Rooney was presented with a replica shirt with number 50 printed on the back by Three Lions boss Roy Hodgson.

Chants of “Rooney, Rooney” reverberated around the dressing room before the 29-year-old gave the type of speech normally delivered by Oscar winners.

And Cahill admits no-one that plays alongside Rooney would have begrudged him that special moment.

“He’s fully appreciated by us, his work rate, his leadership on and off the pitch,” said Cahill.

“We appreciate what a top player he is. When you see how old he is, how many caps he’s got, how many goals he’s got, even at Manchester United, that speaks for itself.

“The manager presented him with a shirt. He gave a little speech to the lads.

The lads gave him a bit of banter, just congratulated him.

“It’s an amazing achievement for a great player. He’s still got many years yet.

“We knew it was going to come, it was just about when. It’s great to do it at Wembley.”

Victories at home to Estonia and in Lithuania next month would make it an unprecedented perfect ten.

And Cahill says the chance to end their campaign with a 100 per cent record is now top of the agenda.

“For us it’s massively important,” added the Chelsea centre-back, who has won 37 England caps.