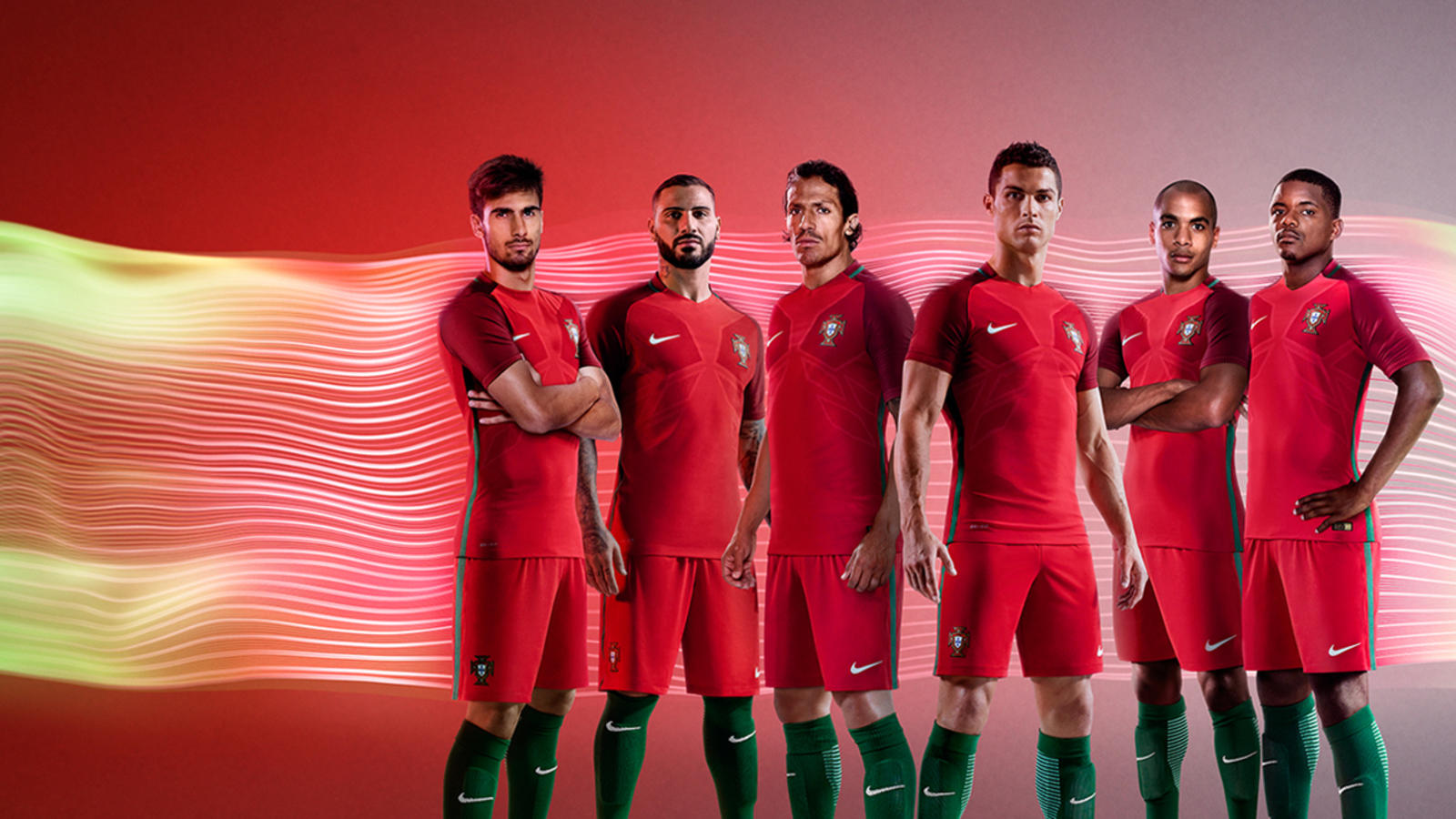 The all new Portugal Jersey: Ronaldo’s finest moments for his country

Being Cristiano Ronaldo’s stylist can’t be an easy job. The 31-year-old Real Madrid and Portugal superstar is undeniably one of the two most gifted footballers on the planet and every drop of talent that oozes out of his perfectly-moisturised pores is matched by his style.

It is part of what makes Ronaldo the player he is, although being the man tasked with designing a Portugal kit the talisman likes is enough to cause anyone to wake up in a cold sweat.

But fortunately Nike have once again hit the nail on the head for this summer’s European Championships.

Fernando Santos’ side are looking to hit new heights in France and go one further than their final appearance in 2004 – where they famously lost to Greece – and will be decked out in a brand new strip to boot.

Nike have stuck to the usual red and green themes of the respective kits, mixing a blend of traditional elegance with flashes of the contemporary.

“Wearing the shirt of the national team and playing with this symbol on my chest is always a great honour,” he said.

“We play for a whole country, for all the Portuguese living in Portugal or abroad, for our families, for our friends, and this is always special.

“This new kit makes us feel stronger than ever, lighter and more agile. Me and my teammates can’t wait to start playing and winning matches with it!”

Nike’s new AeroSwift kits are 10% lighter, with 50% more stretch than the strips they replace.

They employ a new, textured high-performance yarn that wicks sweat from the skin 20% faster than Nike’s most recent football kits, while also drying 25% faster.

Additionally, both the jersey and shorts are constructed using a new knitting process that integrates single and double knit to enhance breathability, stretch and fit.

Nike have also stuck to the theme seen in England’s new jersey by contrasting the colours of the sleeves with the rest of the shirt.

Portugal’s new home kit features a vivid red body with a deeper red shoulder and sleeve, but there is an extra twist with engineered knit zones that create a geometric pattern to both enhance the fit and accentuate Ronaldo’s toned torso.

Meanwhile Portugal’s new away kit represents a radical departure from the previous designs, with the new luminous green colour a nod towards the side’s bright future.

Portugal meet England on June 2 but the next time Ronaldo and this new strip can be seen on the pitch is this Sunday as they welcome Norway to the Estádio do Dragão.

Some people argue that he has never fulfilled his incredible talent on the big stage for his country, but by netting against Armenia in November 2014, he reached 23 goals in the European Championship to become the competition’s all-time leading goalscorer.

But as he prepares to don a new jersey, what are Ronaldo’s three finest moments in a Portugal shirt to date?

Ronaldo had made his international debut the year beforehand, but it was during the 2004 European Championships – held in his home nation – that he really announced himself to the Portuguese fans. He converted a quarter-final penalty in the shootout with England, before grabbing the opener in his side’s semi-final against Holland. Ronaldo was a livewire throughout that game, but the highlight came as he brilliantly won a corner by twisting and turning past a hapless Michael Reiziger, before meeting Deco’s resulting cross with aplomb to head past Edwin van der Sar for the game’s opening goal. He may have been left in tears as Portugal lost that final to Greece, but thanks to his two assists and two goals in the tournament he was named in the team of the competition.

Just two days after his 22nd birthday in February 2007, Ronaldo led Portugal out as skipper for the first time in a friendly game against Brazil. That move had been requested by Portuguese Football Federation president Carlos Silva, who had died two days earlier, and Ronaldo has gone on to captain his country 70 times. His tally as captain is 26 more than his nearest challengers, Fernando Couto and João Pinto, who wore the armband 44 times each.

Two of Ronaldo’s landmark performances for his country have come against Northern Ireland, but we have gone for his devastating performance in September 2013. Having notched up his 100th cap against Michael O’Neill’s side a year beforehand, Ronaldo smashed the ball into the net three times in a 15-minute spell of a 4–2 victory. It was his first ever hat-trick for Portugal, although he has managed two since.