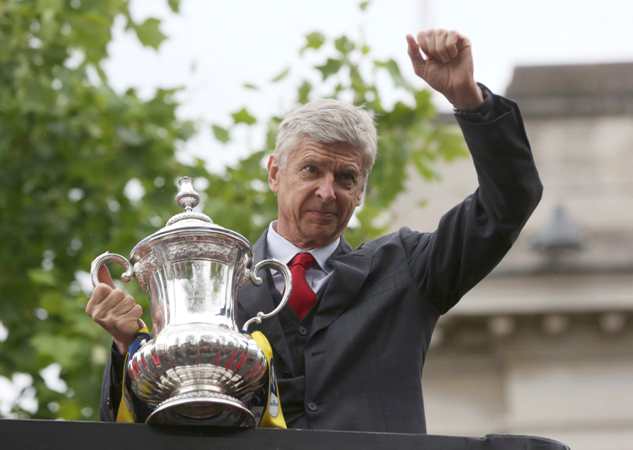 Ten things about the FA Cup

This weekend Arsenal begin their quest to become the first team to lift the FA Cup for a third season in a row since Blackburn Rovers did so in the 19th century. Here are 10 things to know about the world’s oldest club competition.

The first FA Cup competition was staged in 1871-72 in which 12 teams played. Wanderers beat Royal Engineers 1-0 in the final at the Kennington Oval. The following season Sheffield FC knocked Shropshire Wanderers out via a coin toss – something that has never happened since.

Marathon not a sprint

This season’s competition began on Friday 14th August 2015 with the extra  preliminary round where the winners took home £1,500. The final will be played on Saturday 21st May with a prize pot of £1.8million.

In 1901 Tottenham Hotspur, then of the Southern League, became the first non-league club to lift the FA Cup, beating Sheffield United in the final replay at Burnden Park. In celebration they became the first team to attach ribbons in the club’s colours to the trophy – a tradition that continues to this day.

The official Cup final record crowd stands at 126,047. Bolton beat West Ham 2-0 in 1923 in what was the first final at Wembley Stadium and was dubbed the White Horse final, as swarms of ticketless supporters had to be cleared from the pitch. It is thought the true attendance was approximately 200,000.

This weekend sees teams from the Premier League and Championship enter the competition. Teams from the top two divisions were first exempt from entering before round three in 1925/26. Substitutions were permitted for the first time in 1967.

The first FA Cup final to be broadcast by the BBC was in 1927 when Cardiff City beat Arsenal. It remains the sole occasion a team from outside England lifted the cup. This weekend seven third round ties will be broadcast live in the UK.

In the era of multiple replays, Oxford City and Alvechurch played six times before the latter finally progressed to the first-round proper in 1971.

In 1997 Dutchman Ruud Gullit became the first overseas manager to win the FA Cup, guiding Chelsea to success. They beat Middlesbrough 2-0 in the final.

Home away from home

The FA Cup final is traditionally played at Wembley Stadium, though has been played at 11 different venues during the competition’s history including Goodison Park and Stamford Bridge. Liverpool won the first FA Cup final to be played outside of England, beating Arsenal in Cardiff in 2001.

French striker Louis Saha, then of Everton, holds the record for scoring the quickest-ever goal in an FA Cup final. He rippled the net after 25 seconds against Chelsea in 2009, though finished with a runners-up medal.