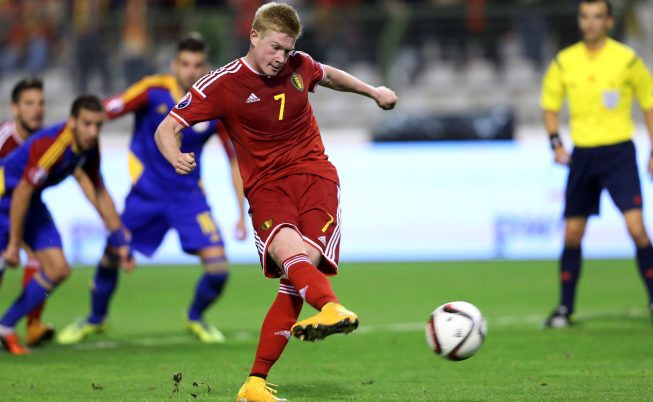 Kevin De Bruyne is set to make his Manchester City debut this weekend when Manuel Pellegrini takes his Premier League leaders to Crystal Palace. Here is everything you need to know about City’s latest superstar. And while you’re at it, to show your support why don’t you don the Man City colours by picking up a shirt through our online store – just click here.

Money, money, money
This summer’s transfer window was the richest in Premier League history as £870million was spent. There was no surprise that Manchester City splashed the most cash as they broke their club record twice. First it was to bring Raheem Sterling over from Liverpool and then they handed Wolfsburg £55m for Belgian star Kevin De Bruyne to make the 24-year-old the most expensive signing of this window.

Through the ranks
De Bruyne began his career with hometown club KVV Diller in 2003. Two years later, he joined Gent and in 2005 moved to Genk. De Bruyne continued his development in their youth set-up and was rewarded for his progress by being promoted to the first team squad in 2008.

No stranger to the Premier League
In January 2012 Bruyne left Genk to sign a five-and-a-half year contract with Chelsea. That August he was sent out on loan to Werder Bremen where he impressed until May 2013. However, upon his return to Chelsea he soon encountered problems with boss Jose Mourinho apparently less than impressed with the Belgian’s work rate and in January 2014, De Bruyne was transferred to Wolfsburg.

Assist machine
Out of all of Europe’s top five leagues last season, De Bruyne had the most assists with 20. He also made the joint-second highest amount of key passes, along with Eden Hazard on 91. As a result of he was voted the Bundesliga’s Player of the Year for 2014/15.

Burundi boy?
De Bruyne struts his stuff on the international stage for Belgium but his nationality is a little bit more complicated than it might seem. His mother is Burundian, but has also spent time living in England and the Ivory Coast. As a result of his mother’s African birth, De Bruyne was eligible to play for Burundi, but he chose Belgium instead.

What language barrier?
De Bruyne’s hometown is Drongen, Belgium, which is situated in the Dutch-speaking part of the country. As a result he can speak French, English and Dutch fluently.

Fashion fan
Last year he started his own pop-up clothing line called ‘KDB’ in partnership with clothing label Cult Eleven. A portion of the proceeds from the line is sent to the Special Olympics – an organisation Kevin has spent a lot of time working with throughout his career.

Thibaut trouble?
​In 2013, the Daily Mail reported that De Bruyne’s Chelsea team mate Thibaut Courtois had had an affair with his girlfriend Caroline Linjen. De Bruyne was said to be devastated by the news that Linjen had travelled to Madrid to meet up with Courtois, however the two players are thought to have made up and De Bruyne is now in a relationship with Michèle Lacroix.

Rising through the ranks
De Bruyne was capped by Belgium at under-18, under-19, and under-21 level. He made his debut for the Belgian senior team on 11 August 2010 in an international friendly against Finland in Turku; the game ended in a 1–0 loss for Belgium.

International star
De Bruyne became a first-team regular for Belgium in their World Cup 2014 qualifying campaign. He scored four times as the Red Devils qualified for their first major tournament in 12 years.