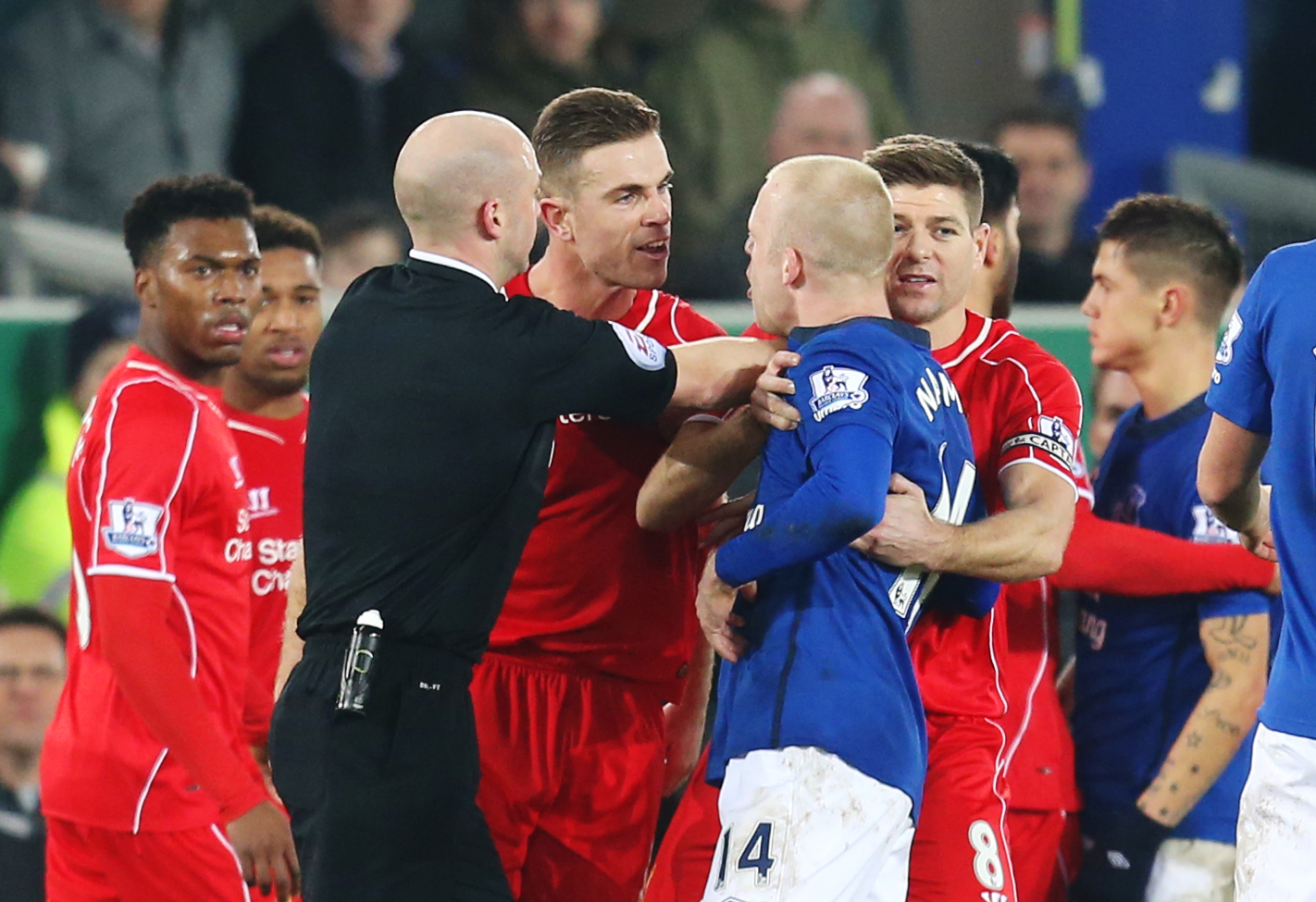 This weekend sees another explosive Merseyside derby take place. This is a fixture that has supplied us with some great Premier League memories, so what better way to gear up for this weekend’s clash by peering back into time. And while you’re at it, why not show your colours this weekend by getting all kitted up at our online store by clicking here.

It was a touching affair between the two rivals as both sides suffered losses of family and friends in the Hillsborough disaster. It was a touching display as rival captains Steven Gerrard and Phil Neville both gave floral tributes to the Hillsborough Family Support Group. Flowers were also laid at the side of the pitch for the Hillsborough victims. Liverpool went onto win 2-1 courtesy of an Andy Carroll header late on in the game while the game also marked the 23rd anniversary of the disaster.

In April 1999, Gerrard scored to secure Liverpool a 3-2 win over Everton. Gerrard not only scored the Reds’ third goal but there was a certain dramatic finish. Gerrard had came on as a sub with 20 minutes remaining and Francis Jeffers scored to pull one back for the visitors. However, the former Liverpool captain became the hero of the game as he had to clear a ball on the line just before the finish, much to the relief from his team-mates.

It was truly an end of an era as Kenny Dalgish announced his shock retirement two days after a 4-4 draw with Everton. Tony Cottee scored two dramatic late goals to drag the Blues level at Goodison Park. The dramatic 4-4 draw was already one to be remembered but it was the events after the game that sealed Dalgish’s departure. He felt the pressure of the job was getting too much and the legendary Scot left the club he loved.

In 2009 Everton sealed victory with a 1-0 win over Liverpool as Dan Gosling scored late in extra time. The Blues player had only turned 19 when he sent his side through to the fifth round. It was a sad state of affairs for Liverpool as they lost Steven Gerrard early to injury and Lucas Leiva was sent off in the second half.

This free-kick will be remembered by many, not just the Merseyside fans. In the 93rd minute, McAllister scored a fantastic free-kick from 44-yards. His signing was controversial as he was signed on a free at 35 years old, which many quickly forgot after securing the win for the Reds in April 2001.

The injury time equaliser from Jagielka

Toffees boss Roberto Martinez admitted it was one of the best goals he had ever seen live and it has certainly gone down in history as one of the best Merseyside derby strikes. In the emotionally charged fixture, Phil Jagielka scored an injury-time equaliser to share the point with their rivals. It was a magnificent effort from 30-yards; goals from a long range seem to be a re-occurring feature in this fixture.

The celebration was certainly controversial. After being taunted by Everton fans Fowler scored two goals and celebrated in an iconic way. His manager at the time, Gerard Houllier, tried to say he was simply eating grass but we will leave it up to you as to what you think he was up to. Unfortunately for the Frenchman that excuse did not work and Fowler received a four match ban. It was, however, Liverpool’s first win over their rivals in five years as Liverpool won 3-2.

The comedy juggling of Pepe Reina

This is certainly one for the Evertonians as Pepe Reina juggled the ball in a seemingly comedic way. Andy Johnson was there to capitalise on the Spaniards colossal mistake as he carried out a bad impression of trying to carry a hot potato without wearing gloves as if in a comedy sketch. Everton had already won the game with seconds to go, but Reina added another highlight for the Toffees as they won 3-0.

One word that defined this game was classic. Both sides showed class and compassion to every single person that entered Wembley that day. They were Merseyside united as the final came five weeks after the Hillsborough disaster. Before the kick-off there was a minute silence and the teams wore black armbands. Gerry Marsden lead singer of Gerry and the Peacemakers led the entire crowd of a rendition of You’ll Never Walk Alone. Liverpool won 3-2 after extra time but it was the united support in the stands that was certainly incredible and it was a poignant day for the city.

Mr Liverpool does it again! In March 2012 Gerrard enjoyed one of his best moments in a red shirt as he scored all the goals as Liverpool beat Everton 3-0 to leave with the match ball under his arm. It was the first Merseyside hat-trick since Ian Rush in 1982 and wasn’t exactly what then Everton manager David Moyes had in mind for his tenth anniversary as Toffees boss.