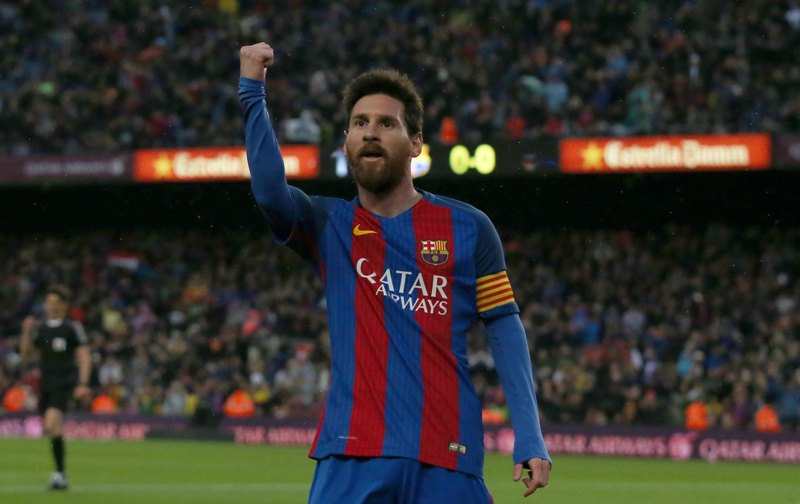 For a long time, it felt like Lionel Messi had broken every scoring record possible but in a famous win at the Santiago Bernabeu, the Argentine maestro curled home an injury-time winner in El Clasico to reach a major milestone.

Messi’s second goal in the 3-2 win over rivals Real Madrid fired Barca top of La Liga as they clawed their way back into contention to win a third consecutive domestic title.

And with just two weeks remaining in the La Liga season, Barca are top of the pile on goal difference from Real – who have a game in hand.

We take a look at how Messi’s side can clinch the league crown ahead of their rivals.

VICTORY IN THE CANARY ISLANDS

For Barcelona to stand any chance of pipping their rivals to the post, they must make light work of their remaining opponents starting with Las Palmas on Sunday.

Messi and Suarez netted in Barca’s 5-0 win at the Camp Nou in the reverse fixture in January and with Las Palmas languishing in 14th place the Catalonia side will be firm favourite to take all three points.

Real do not play their game in hand until the middle of next week which – combined with their Champions League semi-final second leg – means they will face four games in 14 days.

And whilst Barca face sides towards the bottom of the league, Real come up against much sterner tests.

KEEP THE PRESSURE ON

With Barcelona expected to ease past Las Palmas, Real Madrid will know they must overcome Sevilla – who are chasing a Champions League qualification spot in fourth – on the same day to stay in the driving seat to win the title.

And Madrid’s tough games do not end there.

Celta Vigo’s resurgence in this season’s Europa League has surprised many and although they could be dumped out at the semi-final stage by Manchester United, the side will be battling for a top-half finish.

Vigo have enjoyed their fair share of giant killings this season having beaten Los Blancos 4-3 on aggregate in the Copa del Rey back in January.

And Vigo would loving nothing more than to deny Los Galacticos of yet another trophy this season by beating Madrid when they come calling next Wednesday night.

Should – as expected – both Barcelona win their next games, the nation will be watching a thrilling finale on the final day of the season.

With the rest of the league playing either on Saturday 20 May or early afternoon on Sunday 21, Barcelona and Real Madrid are made to wait until Sunday evening to play out the deciding fixtures.
But neither side will have an easy ride.

Barcelona host Eibar at the Camp Nou, although they will take confidence from thumping them 4-0 in the reverse fixture, Messi and co will be well aware that they have turned things around since then and currently sit eighth in La Liga.

Real Madrid travel to Malaga to face a side that tested them at the start of the year.
Madrid squeezed past Malaga for a 2-1 victory and will hope for a less stressful night when the sides meet at La Roselada stadium next Sunday.