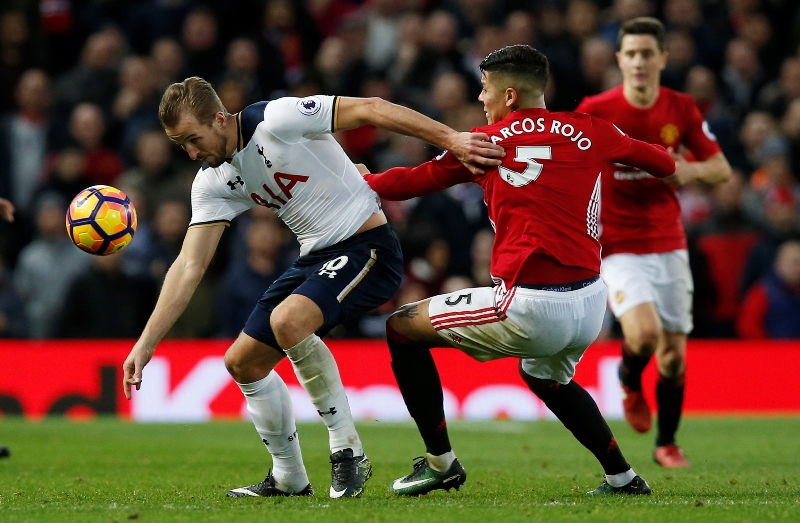 Where do Spurs and United need to strengthen to be title contenders next season?

Tottenham Hotspur might have been predicting that victory over Manchester United at White Hart Lane on Sunday would ramp up the pressure on league-leaders Chelsea ahead of a final-day title showdown.

But after their shock defeat to West Ham last Friday, Spurs could well have lost the title before a ball is kicked in north London.

Chelsea can wrap things up with victory over West Brom at the Hawthorns and Spurs would be left to rue another near miss after falling at a similar stage last season.

And with Jose Mourinho’s United struggling to secure their top-four place, we take a look at where Spurs and the Red Devils need to strengthen in order to mount a title challenge next term.

It is no secret that Mourinho is a fan of Spurs’ midfielder-come-defender Eric Dier. Since learning his trade at Sporting Lisbon as a youngster, the impressive ball player has been a mainstay in both England and Spurs sides for the past two seasons.

With both Spurs and United likely to try and strengthen in the central midfield department this summer, one of the sides could be boosted by the retention or arrival of Dier.

Should Spurs lose the England star, they will need to invest in a replacement and perhaps manager Mauricio Pochettino will look no further than Tiemoue Bakayoko.

The powerful Monaco midfielder is highly sought after by Chelsea and PSG but Pochettino may be able to attract the 22-year-old after another superb season with Spurs.

Bakayoko’ defensive qualities and ability to command the midfield, as well as his flawless distribution, will certainly be desired by Spurs but they could be priced out by clubs with larger budgets.

With the future of veteran striker Zlatan Ibrahimovic uncertain after the Swede sustained damage to knee ligaments in the Europa League, Mourinho will need assurance that there will be a striker ready to bang in 20 goals for him.

Though the highly-rated Marcus Rashford has impressed this season, Mourinho will want an out-and-out striker as his main man.

With the fine form of Gonzalo Higuain at Juventus and the fact that the Argentine is approaching the twilight of his career, Mourinho – who managed him at Real Madrid – may wish to tempt Higuain to Manchester after Juve’s assault on the Champions League final.

As the former Real hitman has slowed somewhat with decades of football in his legs, Mourinho may opt to pursue someone with a little more longevity but Higuain has shown his finishing ability in his first year at Juventus.

He has netted 24 league goals in 33 appearances to become a fan favourite in Italy and if his €90m price tag last summer is anything to go by, the Argentine will not come cheap.

BALLAST AT THE BACK

After criticising Luke Shaw publicly, Jose Mourinho could feel a need to strengthen his full-back ranks in the summer.

The right-footed Italian Matteo Darmian has been playing left-back for the majority of the season and while Antonio Valencia has been hailed by his boss, the 31-year-old cannot have too many seasons left in him.

While Monaco full-back Benjamin Mendy is an attractive option, United may be priced out of the market after the French club reportedly requested an unprecedented €65m for the defender – which is close to double the global record £30m United paid for a full back when signing Luke Shaw three years ago.

But United and Mourinho have never been shy in digging into their pockets.

A powerful physical presence and as effective driving forward as he is in defence, Mendy meets the Mourinho model for a modern full-back and could balance Antonio Valencia’s presence on the right side of defence.

THE LATEST RANGE OF TOTTENHAM HOTSPUR AND MANCHESTER UNITED SHIRTS, TRAINING WEAR AND FAN-WEAR IS AVAILABLE TO PURCHASE IN STORE AND ONLINE