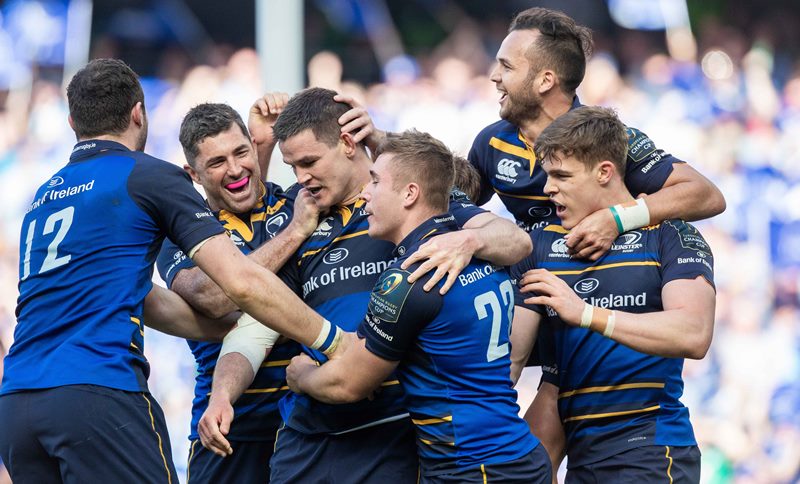 Could this be a special campaign for Leinster?

Leinster booked their place in the European Champions Cup final as the Irish province swept aside Scarlets with a crushing 38-16 victory in Dublin on Saturday.

The semi-final triumph continued a remarkable season for Leinster, who also have silverware in their sights in the Guinness PRO14 heading into their final-round clash against Connacht.

A flying start from Leo Cullen’s side saw James Ryan, Cian Healy and Fergus McFadden cross the whitewash to give them a 24-9 half-time lead at the Aviva Stadium.

Scott Fardy and man-of-the-match Johnny Sexton added further tries in the second half to underline Leinster’s dominance, with Tadhg Beirne grabbing a late consolation for Scarlets.

But before Leinster can focus on the showpiece final – and a potential fourth European crown – their attention turns to Round 21 of the Guinness PRO14 and a trip to Sportsground to face Connacht.

We take a look at what each side is playing for going into next weekend’s showdown and how they have both fared so far during the 2017-18 campaign.

Despite being left red-faced by Benetton last time out, Leinster are still in prime position to secure a home semi-final in the Guinness PRO14 Final Series.

Victory against the men from Treviso would have made sure of top spot in Conference B but it is still in their hands as they prepare to face Connacht in the final round of fixtures.

Just one point will be enough for Leinster against Connacht to avoid the need to crunch the numbers should Scarlets pick up five points when they visit Principality Stadium to face Dragons.

Connacht, on the other hand, sit in sixth position in Conference A going into the final round of the regular season, with Zebre breathing down their neck just two points behind.

Recap of the season so far

Leinster have won 14 of their 20 games in the Guinness PRO14 up to this point to sit at the top of Conference B with 70 points – five more than Scarlets.

Two of their six defeats have come in their last three games, with a 41-6 victory against Zebre sandwiched in between the losses to Ospreys and Benetton.

However, those defeats preceded their impressive 30-19 triumph over Saracens in the European Champions Cup quarter-finals and the semi-final win against Scarlets.

Meanwhile, Connacht have found the going tough in recent weeks as they have slipped out of contention for the last spot in the Final Series in Conference A.

Kieran Keane’s men have lost their last five games in all competitions, including being dumped out of the European Challenge Cup by Gloucester Rugby at home.

Their last victory in the PRO14 came back in February when they edged out Benetton 22-19 before suffering defeats against Cheetahs, Edinburgh, Ospreys and Glasgow.

The two sides last came face-to-face in January when Leinster made it four Guinness PRO14 wins in a row with a narrow 21-18 victory at the RDS Arena in Dublin.

THE LATEST RANGE OF LEINSTER AND CONNACHT RUGBY JERSEYS, TRAINING WEAR AND FAN-WEAR IS AVAILABLE TO PURCHASE IN STORE AND ONLINE. CLICK HERE TO SHOP NOW.