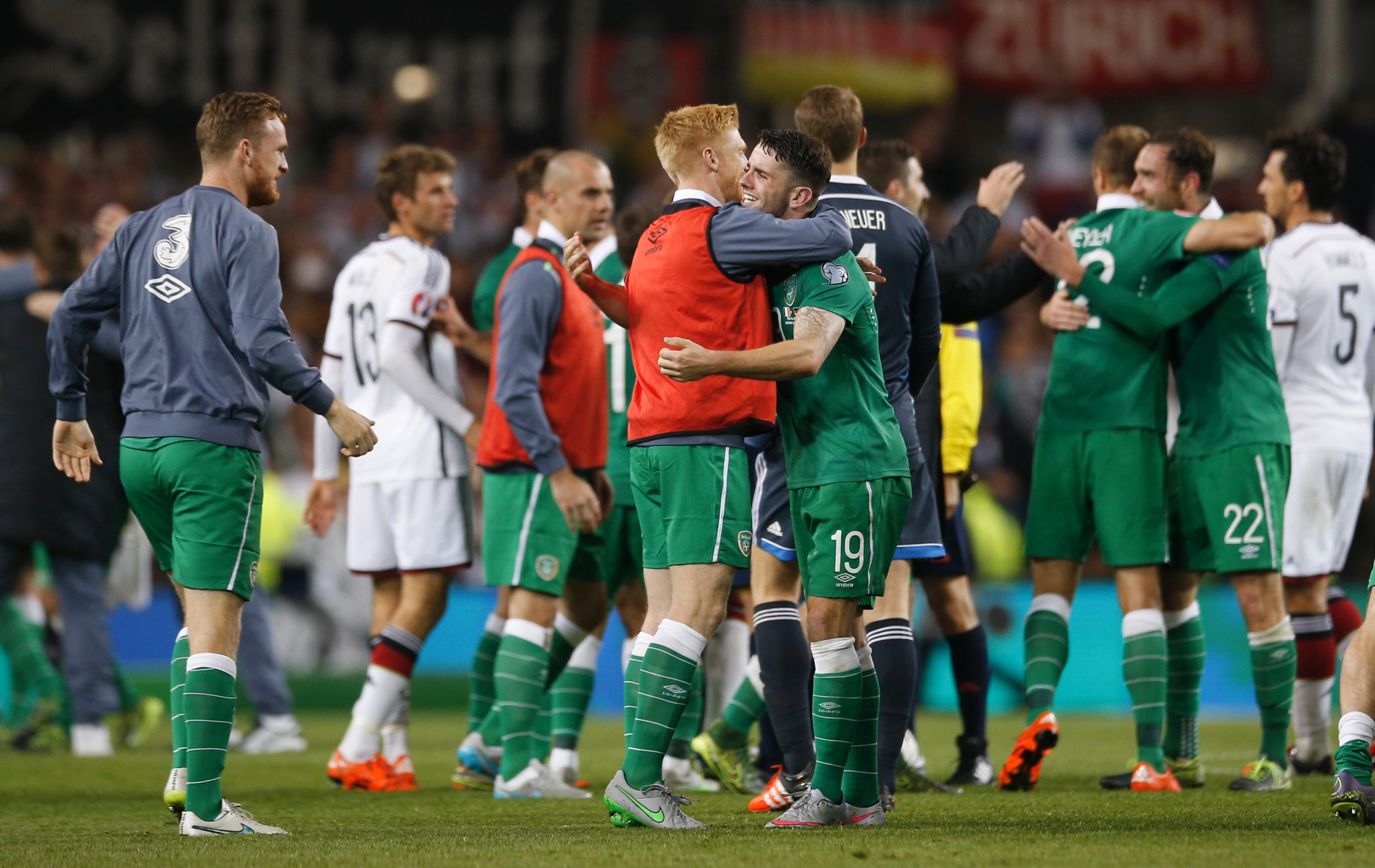 It’s crunch time as the Euro 2016 Qualifiers reach their conclusion with the teams attempting to seal their place in France next summer. We pick our ten talking points ahead of the weekend’s football, so show your support for your side and click here to visit our online store.

Winner takes it all in Warsaw
Republic of Ireland can secure their place at Euro 2016 on Sunday if they beat Poland or score two goals or more in a draw. Both sides head into the game on 18 points and the winner will clinch the second automatic qualifying place from Group D, assuming Germany beat Georgia. The losing side will end up in the play-offs.

History on Ireland’s side
The signs are positive for Ireland going into the game – Poland have only won one of the last eight games between the sides, a 3-2 win back in November 2008. But in the same time, there have only been two Ireland wins – the other five were draws. The last time the two sides met in Poland during qualifying for a European Championship was in October 1991. That game ended 3-3, a result that would see Ireland through this weekend.

Can anyone stop Lewandowski?
If Ireland are going to make it to France next summer, it’s more than likely Robert Lewandowski will have to be stopped. The striker is the leading scorer in qualifying with 12 and has scored 16 goals in 11 games for Bayern Munich this season, including five in nine minutes against Wolfsburg.

Party time for Northern Ireland
Northern Ireland have already qualified for a European Championships for the first time after beating Greece on Thursday. They can top Group F with a draw against Finland in Helsinki on Sunday. Not bad for a team that finished fifth in their qualifying group last time, with only nine points from ten games.

Bale should fire Wales to glory
Wales will qualify for their first major finals since 1958 if they get a point against Bosnia-Herzegovina in Zenica on Saturday. It will be largely due to Gareth Bale who’s scored six of Wales’ nine goals so far in Group B. The only player that’s got a higher proportion of their team’s goals than Bale is Matteo Vitaioli, who scored San Marino’s only goal.

Respite for Strachan?
There have been calls for Scotland manager Gordon Strachan to resign after his side’s 2-2 draw with Poland meant they could no longer qualify from Group D. He should have the chance to put a smile back on his face on Sunday when they travel to Portugal to play Gibraltar, who have conceded 50 goals so far this campaign, the most of any team.

England won’t have it easy in Vilnius
England will finish top of Group E regardless of their result against Lithuania in Vilnius on Monday. The Three Lions have only played their opponents once before, beating them 4-0 earlier in qualifying at Wembley. But a similar scoreline is unlikely, the last time Lithuania lost by more than three goals at home was in October 2000, in a 6-1 defeat to Hungary.

Netherlands on the brink
They were the third-highest ranked team when the draw was made, but Netherlands are on the verge of failing to get to the Euros in France next summer. Automatic qualification from Group A is already beyond them and they sit in fourth with two games to play, two points behind Turkey. They travel to Astana to play Kazakhstan on Saturday, before welcoming Czech Republic on Tuesday while Turkey’s last two matches are against Czech Republic and Iceland.

Will Albania reach the finals for first time?
Albania can make history by reaching the finals of a major tournament for the first time if they win in Armenia on Saturday. They won 2-1 when the sides met earlier in qualifying and Gianni de Biasi’s side sit a point behind Denmark, who have already played all of their games, in Group I.

Don’t expect goals in Torshavn
Romania are off to Faroe Islands on Sunday having drawn the most matches in qualifying – five of their nine games have been ties. They have only scored eight goals and conceded just two in Group F. Qualifying has also seen a new national record for the longest time without scoring, which was ended on Thursday with a 91st minute Ovidiu Hoban equaliser against Finland. If they win in Torshavn, they will be off to France as they go into the game in second, a point ahead of Hungary, who play Greece.