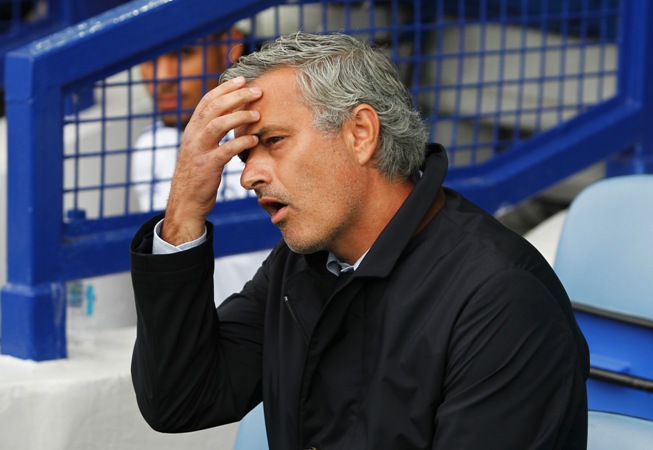 THE TIME FOR JET LAG AND EUROPEAN HANGOVERS HAS BEGUN, SO HOW WILL THE TEAMS RETURNING FROM THE CONTINENT FAIR IN THIS WEEKEND’S PREMIER LEAGUE FIXTURES? WE PICK OUR TEN TALKING POINTS AHEAD OF THE WEEKEND’S FOOTBALL, SO SHOW SUPPORT FOR YOUR SIDE AND CLICK HERE TO VISIT OUR ONLINE STORE.

Will the real Chelsea please stand up?
What has happened to the champions? Four points from five Premier League games so far and the worst defensive record in the division leaves Chelsea 17th in the league table heading into tomorrow’s lunchtime visit from Arsenal. The Blues are unbeaten in their last seven Premier League fixtures against the Gunners though, so now is the time to rediscover their form.

Time for a Hart attack
Five games into the season and the destination of the Premier League title already looks to have been decided. Manchester City have a 100 per cent record and, perhaps most impressively, are yet to concede a goal. But West Ham have already enjoyed away wins at Arsenal and Liverpool, so can they follow up at the Etihad Stadium.

Have they got the character?
A must-have for any Brendan Rodgers side is bags of character – the Northern Irishman never wastes an opportunity to remind us of that. So now it’s time to see what Liverpool’s expensively assembled squad has got in reserve when they welcome promoted Norwich to Anfield, on the back of defeats to West Ham and fierce rivals Manchester United.

You won’t like him when he’s angry
Tim Sherwood is never one to hide his emotions. Whether he is sending a gilet flying across the technical area in celebration or kicking water bottles in rage. After he saw his side throw away a 2-0 lead to lose to Leicester last weekend the self-proclaimed champion of win ratios said he had “never felt so bad” after a game. And if things don’t go his way in the derby with West Brom you do not want to be within kicking distance.

Can Dick do it?
Dick Advocaat’s Sunderland side are still winless in the league and will be looking to get some points on the board when they visit Bournemouth. Eddie Howe’s men have had a decent start to the season with a resounding win over West Ham the highlight. But a 3-1 defeat to fellow promoted side Norwich at the weekend could mean that this is the perfect opportunity for Sunderland to kick-start their campaign.

Will the Toon arise from their slumber?
Manager Steve McClaren described Newcastle’s loss to West Ham on Monday as the “wakeup call” they needed. After last season’s discontent the Magpies have been little better this term and prop up the rest after five games. They host Watford on Saturday who, despite beating high-flying Swansea last weekend, are a side the Geordie faithful will expect to pick up three points against, so will they deliver?

Magical Mahrez
There is no stopping Riyad Mahrez. The 24-year-old ran the show for Leicester – again – during their spectacular second-half comeback against Aston Villa last time out. This weekend he takes his box of tricks to the Britannia Stadium, where the fear factor looks to have evaporated with Stoke’s change in philosophy. So can he continue to wreak havoc on all that stand before him?

Tale of two shocks
Swansea and Everton were involved in two of last weekend’s surprise results. While the champions were slayed at Goodison Park, Swansea’s strong start was halted by a loss at Watford. So will Swansea respond with a win or will Everton continue their goalscoring form in South Wales?

It’s time to shine for Kane
Tottenham are yet to really get going so far this season and that’s probably because talisman Harry Kane is yet to start firing. The 22-year-old, so prolific last term, has, as yet, been unable to add to two England goals in a Spurs shirt. But he boasts too much quality for the barren run to continue and will hope to light up White Hart Lane when Crystal Palace come calling on Sunday.

Double Dutch
The weekend’s action ends at St Mary’s where Southampton entertain Manchester United. Compatriots Ronald Koeman and Louis van Gaal don’t see eye-to-eye and their head-to-head record stands at 1-1 after Southampton grabbed an historic win at Old Trafford last term. Victory against United on Sunday could be just the thing Southampton need to recapture the form that saw them record their highest ever finish last season and a chance to get one over on Van Gaal would be most welcome.