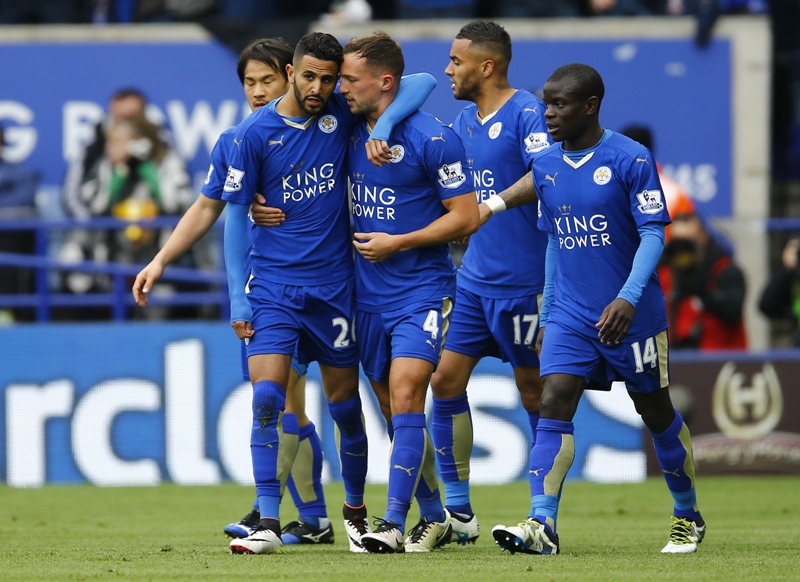 There’s only a handful of Premier League matches remaining and this could be the weekend that the greatest upset in sporting history is confirmed – we have all the major talking points in one place. Why not head over to our store before it all kicks off and get yourself kitted out in your team’s colours?

The Leicester City fairytale has been analysed to death over the past few months but Sunday is the day it could finally become a reality. Victory at Old Trafford – the ground at which more Premier League trophies have been lifted than any other – would seal the deal for the fantastic Foxes.

Poch is in but Dele’s out

After a season that has seen them more or less guarantee Champions League football and remain in the title hunt until the bitter end, Tottenham boss Mauricio Pochettino has extended his contract until 2021. By the time he leads Spurs to face Chelsea on Monday night the trophy may already be in Leicester but Poch will want to get one over their fellow Londoners. They must do it without talisman Dele Alli though after he got a three-game ban for failing to resist the temptation to punch Claudio Yacob in the stomach.

According to Arsenal boss Arsene Wenger, the Gunners missed out on the title this season after dropping too many points at home to lower teams having played those games in a “very difficult climate”. That climate won’t get any easier on Saturday when they take on relegation-threatened Norwich thanks to further protests planned against Wenger.

Returning Alan to doom the Magpies?

Defeat at home to Crystal Palace would almost certainly send Newcastle plummeting into the Championship and who should be in charge of Palace at the moment but former Magpies boss Alan Pardew. Pardew is on record as wanting Newcastle to survive but the Eagles need momentum heading towards the FA Cup final.

Sunderland are right in the thick of the relegation scrap but their performances since January deserve to see them higher in the table. Getting three points on a warm April Saturday in Stoke has never been an easy task but Big Sam’s boys could desperately do with a win as games are starting to run out.

The joy of six for Sergio

Having scored in five consecutive Premier League games for the fourth time in his career, Sergio Aguero will try to make it six on the spin for the first time when Manchester City travel to in-form Southampton on Sunday. There’s the small matter of a Champions League semi-final second leg against Real Madrid next week but City can’t look past the Saints.

It’s nine Premier League games unbeaten for West Ham and they will be keen to make that ten as they travel to West Brom. After such a fantastic season – lost in the shuffle slightly thanks to Leicester and Spurs’ exploits – the Hammers deserve Europa League Football next year but need to secure sixth spot to ensure that happens.

Pre-season relegation favourites Watford are sitting pretty at 12th in the Premier League having also reached the FA Cup semi-finals yet manager Quique Flores could be facing the sack – go figure! A match at home to hopeless, hapless, feckless Aston Villa should at least offer some respite for the poor Spaniard.

Liverpool’s focus is on winning the Europa League so expect Jurgen Klopp to ring the changes for Sunday’s trip to Swansea which comes slap bang between the first and second legs of their semi-final with Villarreal. That will probably mean some fringe players get a chance to impress so the mid-table Swans could profit.

The wheels have spectacularly come off the Roberto Martinez bandwagon in recent weeks with Everton fans frustrated by their lowly league position, heavy derby defeat, semi-final cup heartbreak and Martinez’s insistence that mediocre performances are phenomenal. Protests are expected at Goodison Park as Bournemouth come to town and just as they did to Steve McClaren’s Newcastle dream, the Cherries could put the final nail in the Martinez coffin.