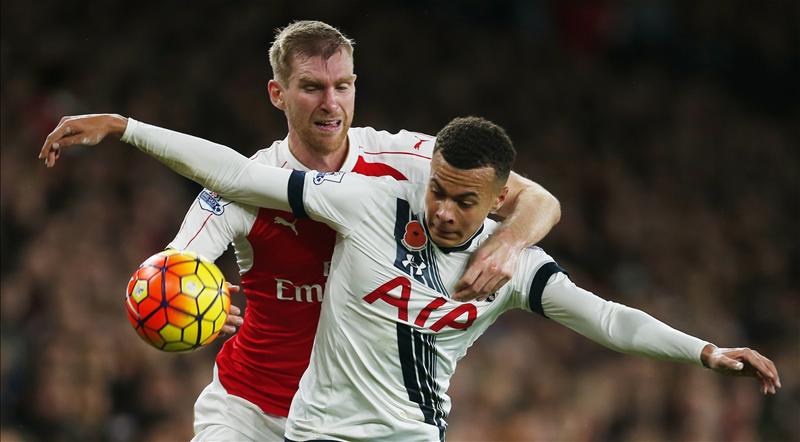 A North London Derby with greater significance than ever, an unlikely goal machine at Selhurst Park and a late title bid from a fallen giant. Here are our ten things to look out for in the Premier League this weekend. Why not prepare by visiting our online store and getting yourself decked out in your team’s colours?

Who’s got the cojones?

Tottenham and Arsenal both saw their title chances dented on Wednesday night and Saturday’s North London derby at White Hart Lane could send one of them either further off the pace – but who? Well, Premier League legend Paul Scholes has an idea. “When it comes down to the crunch, they lose their bottle,” he said of Arsenal. “They can’t produce in big games.”

Stoke on their last legs

The Potters have an impressive defensive record this season but they visit Chelsea this weekend with just five fit defenders after Phil Bardsley joined Ryan Shawcross, Glen Johnson and Marc Wilson on the treatment table. Will Guus Hiddink hand Alexandre Pato a chance to put them to the sword?

Return of the Reece

Reece Oxford was a revelation back in August, starting their season-opening 2-0 win at Arsenal at the tender age of 16 and producing a man-of-the-match display. He has started just one match since but after injuries saw him called upon in victory over Tottenham on Wednesday, Oxford – now at the grand old age of 17 – could be deployed from the word go against Everton.

Manchester City and Aston Villa will desperately need points for very different reasons when they meet at the Etihad Stadium. A humbling midweek defeat to Liverpool saw City slip ten points from the top, while Villa are eight adrift of the bottom. Is anyone brave enough to back the bottom club to pull off an upset?

Time could be running out for Newcastle manager Steve McClaren, after they were beaten again in midweek, and an expectant St James’ Park has grown restless. A resurgent Bournemouth are the visitors on Saturday, but can they hammer another nail into the former England manager’s coffin?

Sunderland face a Southampton side that has lost its last two games, while the Black Cats toppled Manchester United not too long ago. Does manager Sam Allardyce smell blood? Hardly. “If you said to me ‘would you take a point now?’ I’d say yes,” he revealed.

Back to square one

Swansea beat Arsenal on Wednesday to dent their title hopes and next up is a home clash with Norwich. Skipper Ashley Williams scored the winner at the Emirates but he insists it will count for nothing if they don’t win again on Saturday: “If we don’t win that, we don’t back up the win [at Arsenal]. Then we’re back to square one.”

Watford host league leaders Leicester wondering what has happened to Odion Ighalo’s goals. The Nigerian was prolific in the first half of the season but he has just one league goal in nine appearances this year. Manager Quique Sanchez Flores said: “We are supporting Ighalo a lot because he is a little bit confused.” That explains that, then.

Who is the Premier League’s hottest striker right now, on the other hand? Connor Wickham, obviously. The Crystal Palace man had one league goal before last weekend but grabbed four in as many days with doubles against West Brom and Sunderland. Liverpool are the side tasked with keeping him quiet on Sunday.

This truly is the season that keeps on giving and, whisper it quietly, Manchester United might just be back in the title race. It has been a truly disastrous season for Louis van Gaal but three points on Wednesday night moved them ten off the top – level with rivals City. Three more at West Brom on Sunday would certainly aid their cause further. Surely not…