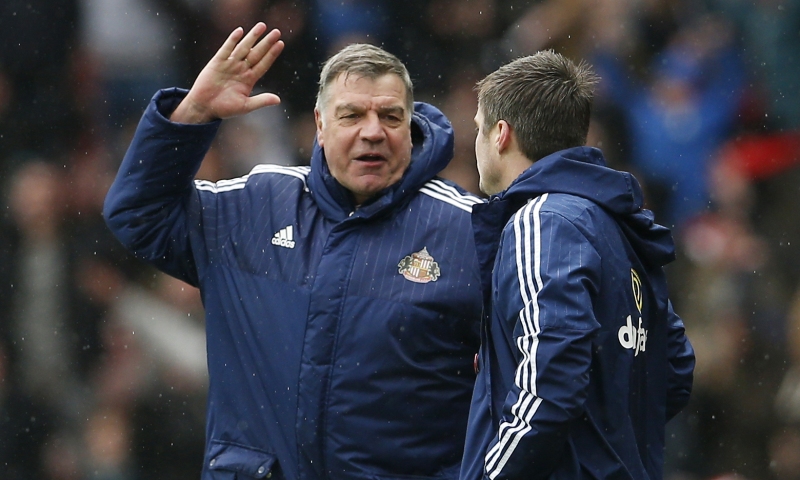 A pair of managers taking on former clubs, the 100th league meeting between two newly-promoted sides and two huge games in the title race on Sunday – Premier League football is back so why not visit our online store to get decked out in your team’s colours ahead of another massive weekend?

Big Sam back at the Boleyn

Sam Allardyce spent four fruitful years at West Ham before his departure last summer, taking the club up to the Premier League and establishing them as a top-tier mainstay. Now he is set to return to the Boleyn Ground with Sunderland but how will Hammers fans greet their former hero?

It could be disrespectful towards the Gunners or great praise of Norwich, but Leicester manager Claudio Ranieri is expecting a tough test when the Canaries visit this weekend. “I told my players that it will be a big battle on Saturday,” said the Italian. “It will be harder than against Arsenal.” That’s relegation-threatened Norwich, winless in seven in all competitions. You can make your own mind up.

Southampton will host Chelsea on Saturday off the back of a welcome break – their last outing was a 1-0 win at Swansea two weeks earlier. Since then, Chelsea went to Paris and back for a Champions League tie and beat Manchester City 5-1 in the FA Cup. Will tired legs come into play at St Mary’s?

The end is nigh

Aston Villa are eight points from Premier League safety with 12 games to go and for former owner Doug Ellis, relegation is now unavoidable. “In the end,” he said. “It’s the players that are really responsible. Unfortunately, they’ve not been good enough this season. It’s now a certainty that they will be in the Championship next year.” Remi Garde’s side travel to Stoke City on Saturday – can they kick a miraculous recovery into life and prove Ellis wrong?

Watford will face Bournemouth for the 100th time in the league on Saturday and it is all to play for. The two sides, both promoted from the Championship last season, have 35 wins apiece in the previous 99 meetings. Watford are also within touching distance of a place in Europe, while the Cherries are just four points from the drop.

Allardyce is not the only manager set to face a previous employer on Saturday, with West Brom boss Tony Pulis welcoming Crystal Palace to the Hawthorns. Pulis left Palace in controversial circumstances shortly before the start of the 2014-15 season and can exact his revenge by leapfrogging his old side in the table with a win.

Arsene Wenger faces a dilemma over whether to break up his first-choice centre-back duo for their trip to Old Trafford on Sunday. Per Mertesacker claimed the Gunners’ flaccidity in the final third was to blame for defeat to Barcelona in midweek, despite the towering German’s errors in the build-up to both goals. Wenger has since received calls to parachute in Gabriel Paulista for Sunday’s trip to Manchester. All that indecision must be music to the ears of Louis van Gaal, who has plenty of problems of his own…

The dreaded words for Tottenham fans all over the world have been uttered this week: Harry Kane has picked up an injury. Spurs’ talismanic striker has suffered a broken nose and supporters will be praying he is able to line up against Swansea on Sunday. The early prognosis is good but the same cannot be said for Mousa Dembele, who has a groin problem. Is their title challenge about to unravel?