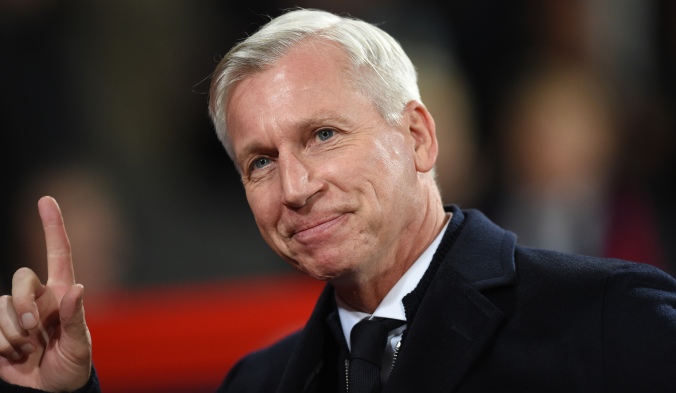 There’s a goal record on the line, a London derby at high noon and crucial points up for grabs at both ends of the table. HERE’S OUR TEN THINGS TO WATCH OUT FOR in the Premier League this weekend and, WHILE YOU’RE WAITING FOR THE ACTION TO KICK OFF, WHY NOT CHECK OUT OUR ONLINE STORE BY CLICKING HERE.

He’s not the messiah, he’s a very naughty boy

As if Remi Garde did not have enough problems, talented midfielder and Villa Park favourite Jack Grealish has been banished to the train with the Under-21s indefinitely after his latest off-field indiscretion. Without him can Villa climb off the bottom with victory against Watford?

Only the mercurial Jamie Vardy has scored more Premier League goals than Romelu Lukaku this term. Lukaku has hit four in his last three games and this weekend the man to try and stop him is Bournemouth’s former Everton centre-back Sylvain Distin. Best of luck big man.

Pardew to pile on the misery

It’s hard to remember a time when there was not discontent at St James’ Park, but things really do seem bleak at the moment under Steve McClaren. And this weekend a familiar face is back to haunt them with Alan Pardew’s Crystal Palace Newcastle’s opponents. Expect no mercy.

Time for the blue moon to rise once more

Whatever has happened to Manchester City? Seemingly unbeatable at the beginning of the season, suddenly they are without a win in three games and have lost ground at the top of the Premier League. Goalkeeper Joe Hart added his name to an already lengthy injury list this week, but excuses will begin to wear thin should they lose to Southampton on Saturday.

Do Sunderland have the next Galactico?

Is Duncan Watmore the next Gareth Bale? Former Spurs striker Jermain Defoe certainly thinks so and Watmore has a chance to try and live up to that billing when Stoke come to town. A second win in a row for the Black Cats could lift them out of the bottom three.

Records are there to be broken

Jamie Vardy and Leicester City are the story of the Premier League season so far, there can be little argument. The England forward can set a new league record if he nets for the 11th consecutive game when Manchester United visit on Saturday.

Spurs have wowed everyone this term with their superb energy and work-rate. But they will kick-off at noon on Sunday against champions Chelsea with a starting XI likely to be full of players who played in Azerbaijan on Thursday night. So can Spurs possibly display their usual levels of intensity?

West Ham fans were revelling in their start to the Premier League season with Dimitri Payet their talisman in defeats of Arsenal, Liverpool and Manchester City. But they looked totally off the pace with Payet absent at Spurs last week, so someone needs to step up to the plate against West Brom.

Touted as a future England manager not so long ago, Garry Monk is now seemingly clinging on to the Swansea job by his fingernails. The Swans’ sole win since August came against bottom-of-the-table Aston Villa and defeat at Liverpool could finally seal Monk’s fate.

Oh to be a Gooner

Who would be an Arsenal fan? So often they threaten to mount a title challenge and, with no warning, inexplicably play their way out of the reckoning. After a super start to the season they have picked up one point from two games. A maximum return from Norwich on Sunday is a must.