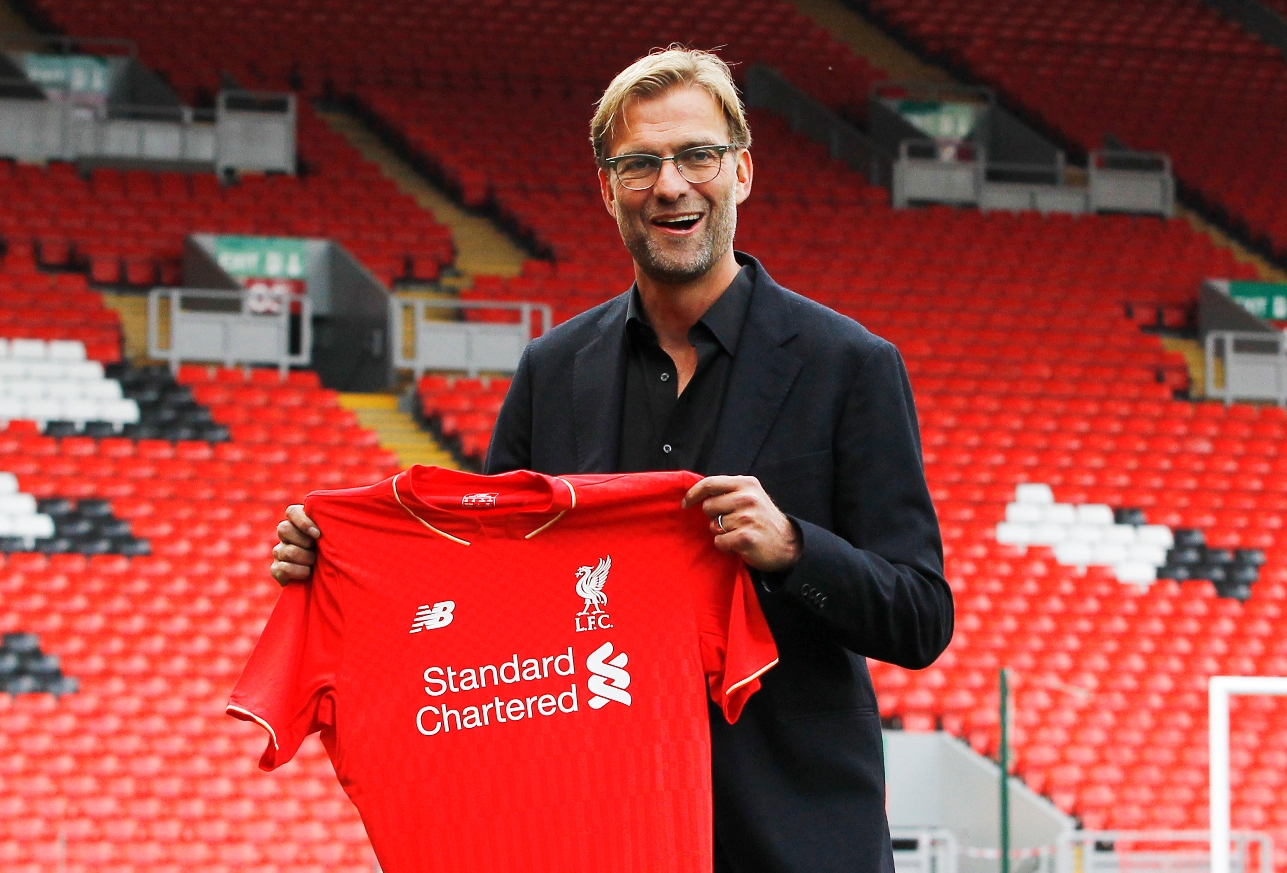 Don’t worry everybody, the Premier League is back this weekend! We know you have missed it so Katie Falkingham has helped you all out and put below her ten things to keep an eye out for. And while you’re at it, don’t forget to check out or online store, which you can do by clicking here.

Klopp to the top?

All eyes will be on the away dugout at White Hart Lane on Saturday as Jurgen Klopp makes his long-awaited debut as Liverpool manager. ‘The Normal One’ is hoping that a win in North London will revive the Reds’ lacklustre season, but with Spurs looking to continue their unbeaten run on home soil and push their way into the top four, it may be a harsh welcome to the Premier League for Klopp.

Battle of the bosses

Both Chelsea manager Jose Mourinho and Aston Villa boss Tim Sherwood are under pressure after less than ideal starts to the season, and will both be desperate for three points on Saturday. Main man Diego Costa returns for Chelsea from his three-match suspension, and Ruben Loftus-Cheek is expected to be given a chance to shine after his impressive form for the Under-21s during the international break.

Only the optimistic would have predicted these two sides would be in such dominating positions so early in the season. Fourth place take on sixth as the Hammers travel across town to Selhurst Park, and Slaven Bilic’s men have totted up the points with a pretty impressive away record so far this campaign, with wins against Arsenal, Manchester City and Liverpool. But the Eagles are a difficult opposition on home soil, and boss Alan Pardew has warned his men of the threat West Ham pose.

The one that got away

Everton boss Roberto Martinez tried and failed to bring Anthony Martial to Merseyside back in 2014, and the Toffees may witness what they could have had this weekend when the French wonderkid and his Manchester United teammates travel to Goodison Park on Saturday. John Stones could return to the Everton side after being sidelined with a thigh injury, but Leighton Baines, Tom Cleverly and the rest of Martinez’s injury list remain in the treatment room.

Manchester City will be devastated to be without star man Sergio Aguero after his five goal thriller at Newcastle earlier this month, after he picked up a hamstring injury on international duty. Captain Vincent Kompany returns for City, and Wilfried Bony is expected to be given a rare chance to lead the line by boss Manuel Pelligrini, and he will be eager to hit the back of the net in order to keep his place in the team. Bournemouth travel north with many an injury woe, with four key players sidelined for the foreseeable future.

Jamie Vardy and Graziano Pelle will go head to head this weekend in the battle of the leading marksmen on Saturday as the Foxes voyage down to the south coast. Claudio Ranieri’s side will be looking to make it back-to-back victories, but with ten of Leicester’s first team appearing for their countries over the international break, the Saints may have the upper hand after their two-week rest. Saints boss Ronald Koeman will be without Shane Long after he picked up a knock playing for Ireland, but Jody Clasie may make his Southampton Premier League debut after impressing in a friendly against Ajax last week.

Big Sam Allardyce will make his first appearance in a Black Cats suit this weekend after replacing Dick Advocaat at the Stadium of Light. His side visit West Brom on Saturday currently sitting one place off the foot of the table, and with the last three Sunderland gaffers starting their careers in the north east with an away defeat, Allardyce will be hoping to kickstart Sunderland’s season with a victory in the Midlands.

The Gunners will be looking to resume where they left off as they face Watford in tomorrow’s late kick-off. Quique Flores’ team have won just one of their last five games, and Arsenal will be hoping to capitalise on what should be an easy win as they look to overtake Manchester City at the top of the table. Arsene Wenger has late concerns over Alexis Sanchez’s fitness, but the Frenchman has Mikel Arteta and Mathieu Flamini back for selection.

Newcastle sit rock bottom of the table, and after goalkeeper Tim Krul was ruled out for the rest of the season after sustaining an injury on international duty for Holland, Steve McClaren will be praying for a miracle as they welcome 13th place Norwich to St James’ Park on Sunday. The Magpies have won just one of their last 19 Premier League games, and with Wes Hoolahan returning to the Norwich team this weekend, Alex Neil’s side will be searching for their first ever league win in the Toon.

The Circle of Life

Stoke Striker Mame Biram Diouf will miss the visit to Wales on compassionate grounds after returning to Africa after the death of his mother, and The Potters will be looking to pay a fitting tribute as they aim to continue their current winning streak. Swansea’s Kyle Naughton is expected to return to Garry Monk’s starting line-up after the birth of his daughter, as the Swans aim to push into the top half of the table with a home victory and a bounce back into winning ways.