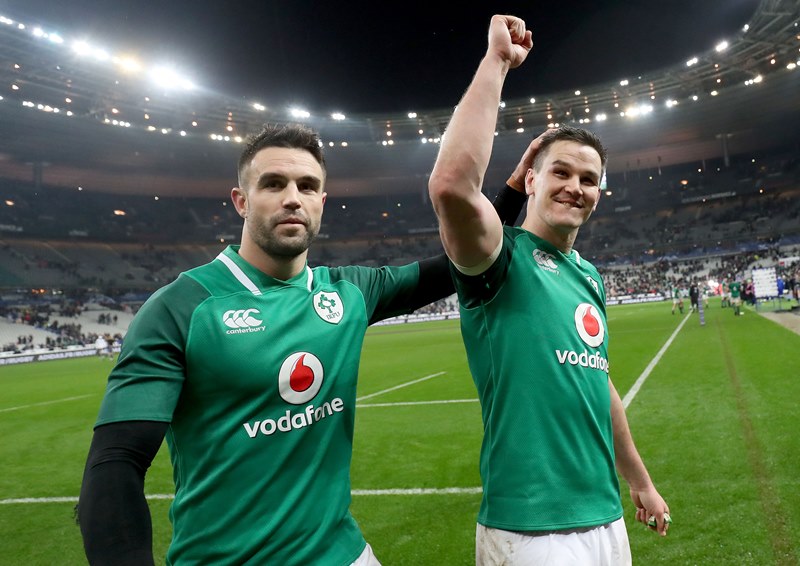 Ireland opened their Six Nations campaign with a momentous victory in Paris, as Johnny Sexton secured the win with a monstrous drop-goal well beyond 80 minutes.

Ireland had dominated all the key statistics; possession, territory (both 68 per cent) and penalty count (10 to six) – yet they were heading for defeat until Sexton’s late, late show.

France looked to have the game in the bag as Teddy Thomas slammed over the tryline with only six minutes to play.

But the Irish gritted their teeth and Sexton, having scored all 12 previous points for his country, had a go at goal from 42 metres out and watched it sail over for victory.

Clearly the man of the match in Paris, Sexton notched up all 15 points with his boot to sink the French.

Sexton had scored two penalties in the first 20 minutes to give Ireland a slender lead, and added two more after half-time.

Having missed his fifth shot on goal, things were looking tense for the final 10 minutes and when Thomas dived over in the 74th minute the effects of Sexton’s miscued kick were compounded.

But in the third minute of added time, Sexton stepped up and showed his world-class quality, nailing an outrageously long drop goal to snatch a last-gasp win and keep hopes of a title alive.

In his Six Nations debut, the lock proved himself on one of the biggest stages with an immense performance in defence.

Many were unsure of the youngster coming into the team ahead of experienced campaigners like Devin Toner, but the Leinster man welcomed the challenge and dominated on the pitch.

Making his Championship bow, the 21-year-old looked far from out of his depth and made 15 important carries.

Crucially though, he made more tackles than any other Irish player with 12 hits, and will certainly take confidence from his display going into the first home match – against Italy this weekend.

Murray’s pinpoint accuracy from the boot kept the French pinned back for most of the game, playing the percentages to keep the game played in the right areas of the pitch.

But the moment of magic, the late drama that will go down in Six Nations history, was orchestrated by the experienced scrum half.

As the clock ticked into overtime, Sexton and Murray simply glanced at each other and the plan was hatched for the drop goal.

After waiting patiently for his fly half and fellow British & Irish Lions star to get into place, Murray delivered the perfect pass to set up Sexton’s sublime winning moment.