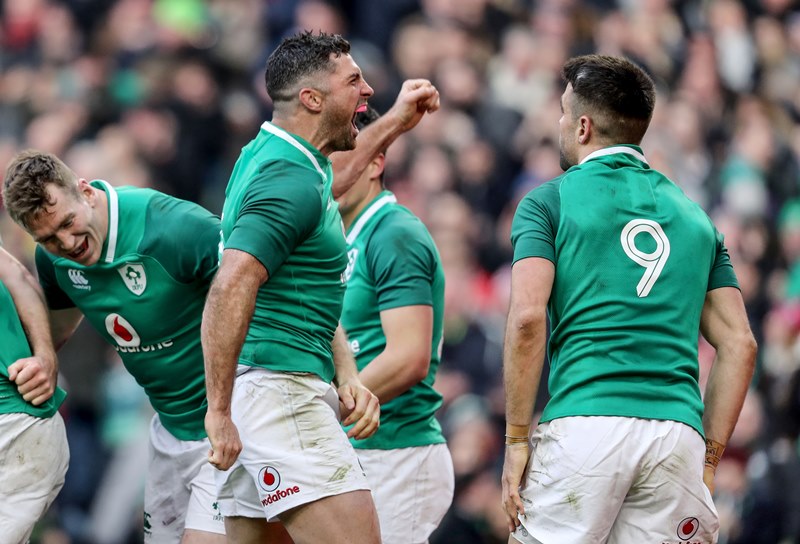 The Six Nations: How are Ireland shaping up?

Another weekend and another win for Joe Schmidt’s men, and the question now on everyone’s lips is can anyone stop Ireland winning the Six Nations?

We are just past the halfway stage in the competition with two rounds left to play. Ireland are three from three and currently top the table, five points ahead of England.

The Aviva Stadium bore witness to another Ireland victory on Saturday as the men in green ran out 37-27 winners over Wales, avoiding another banana skin in their hunt for a first Six Nations title since 2015.

Here, we take a look at how the team is shaping up and ask whether they can achieve that goal, or even a first Grand Slam since 2009.

And don’t forget to enter our Six Nations competition, the Ultimate Fan Prize, which could see you and some lucky mates heading down to Twickenham on Paddy’s day in a private jet!

Saturday saw an impressive win in Dublin and although it took Jacob Stockdale’s late breakaway try to finally break Wales’ resolve, it’s all credit to Ireland that the scoreline perhaps flattered their guests on the day.

The match will long be remembered for Sexton’s bullet pass out to Stockdale for the first try and crucially, Ireland scored five on the day, earning another bonus point which could come in useful when the final table is realised.

Ireland’s other bonus point was secured in the nine-try 56-19 victory over Italy and whilst the Round One 15-13 win over France was an altogether tighter affair, you couldn’t help thinking when Sexton’s wondrous drop goal went over that this could well be Ireland’s year.

Schmidt’s men are well and truly in the driving seat after three matches but standing in their way is a round-four fixture against Scotland before England lie in wait on the final weekend.

The Scots also enjoyed a fantastic weekend with a shock 25-13 victory over England that didn’t flatter the BT Murrayfield hosts in any way at all.

Gregor Townsend’s men will now travel to Dublin on Saturday 10 March, targeting that all-important away victory that they so desperately crave and need to achieve to take the next step in their development.

Fly-half Finn Russell was at his best against England whilst flankers Hamish Watson and John Barclay were imperious at the breakdown – all three will need to be stopped if Ireland are to avenge last year’s defeat in Edinburgh.

Ireland are strong favourites to down Scotland in Dublin but then in round five comes a humdinger of a fixture as Schmidt’s men travel to Twickenham on St Patricks Day.

Many observers are predicting that England and Ireland will both win their round four fixtures to leave this match as a Championship decider but whatever the permutations, it’s a game that never disappoints.

Last season, these two opponents also met in round five, with Ireland edging an intense encounter 13-9 but England going on to lift the Six Nations title – many would expect a similarly ferocious fixture once again.

Up until the weekend, England had not lost since that match but Scotland highlighted a chink in their armour on Saturday and Eddie Jones’ team need to improve fast.

Key players Billy Vunipola and Ben Youngs appear to be sorely missed and Ireland’s performances so far have everyone on these shores dreaming of a Grand Slam won on the famous Twickenham turf.