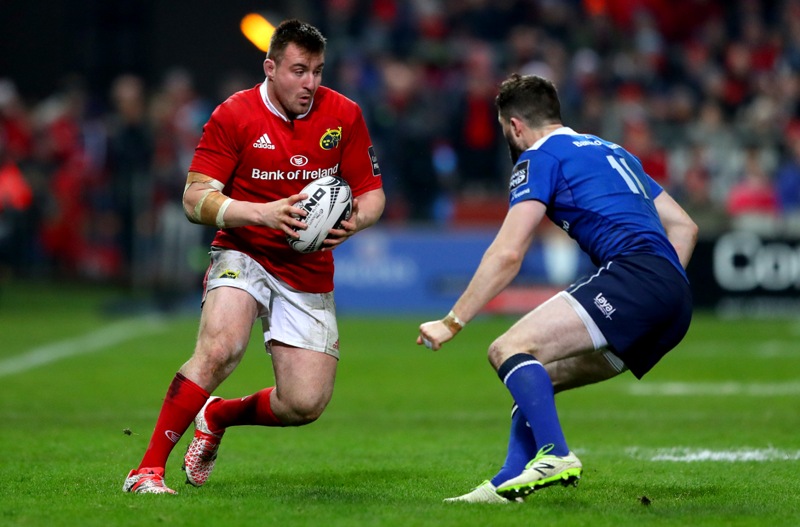 The other Scannell: Who exactly is Munster’s new star?

Opportunity has knocked for Niall Scannell this season – and the Munster hooker has not so much opened but bashed the door down at Thomond Park.

Though the Munstermen have five senior hookers on their books, a combination of injuries and a carpe diem attitude from Scannell has seen the 24-year-old swell in stature.

And with Munster back in action in the Champions Cup away to Racing 92 on Saturday, Ireland head coach Joe Schmidt will likely keep close tabs on the rising star.

Mike Sherry is still struggling with his fitness while Duncan Casey and Kevin O’Byrne have had their own problems, but the keys haven’t been handed over to Scannell by default.

The New Year’s Eve victory over Connacht was the first game that Scannell has missed in the entire campaign, having for the most part fended off new competition in former Chiefs No.2 Rhys Marshall.

Unreal defence from Niall Scannell. In over the ball like a shot #LEIvMUN

He boasts an incredible engine as, in four of his Pro12 starts this season, he has played beyond the 75-minute mark – increasingly rare for a front-row in the modern game.

Indeed it is fair to wonder just how many fewer minutes Scannell would have received if Munster had succeeded in coaxing Australia hooker Stephen Moore to Limerick last year.

Saturday’s game will be an emotional rearrangement of the postponed fixture in October, before which Munster head coach Anthony Foley lost his life.

Director of rugby Rassie Erasmus has not only done an exceptional job by keeping the spirit strong but the wins flowing ever since – in his first season at the club no less.

Scannell has been one huge beneficiary of the South African’s arrival and while all the ingredients for success may have been in place already, the hooker admitted the defence has a new-found edge.

TRY MUNSTER!!!! Munster one down after Niall Scannell goes over, can Tyler win it with the conversion?

“There’s nothing hugely different technically to what we were doing last year but I suppose it’s just that there’s so much energy and enthusiasm and it’s rewarding if you’re getting off that line and trying to put shots on guys,” said Scannell.

“That’s something you will have seen from other teams in the league with a South African coaching influence. I can see why they love smashing us so much now because (defence coach) Jacques Nienaber really brings that excitement to it and that reward for getting off the line and making your hits.”

What a Difference a Year Makes

Scannell made his European debut against Leicester Tigers in December 2015 and, almost a year to the day, scored a try at Welford Road as Munster came close to a comeback against the same opposition last month.

Though he could not mark the try with a win, it is a striking example of just how far he has come over the last 12 months – despite being a relatively late bloomer.

Scannell, whose younger brother Rory is also a rising star among Munster’s centres, had been sounded out for bigger things at Under-20s level.

He collected eight caps in total in 2012 and has patiently bided his time with his province after making his Munster debut in December 2013 before this season’s explosion.