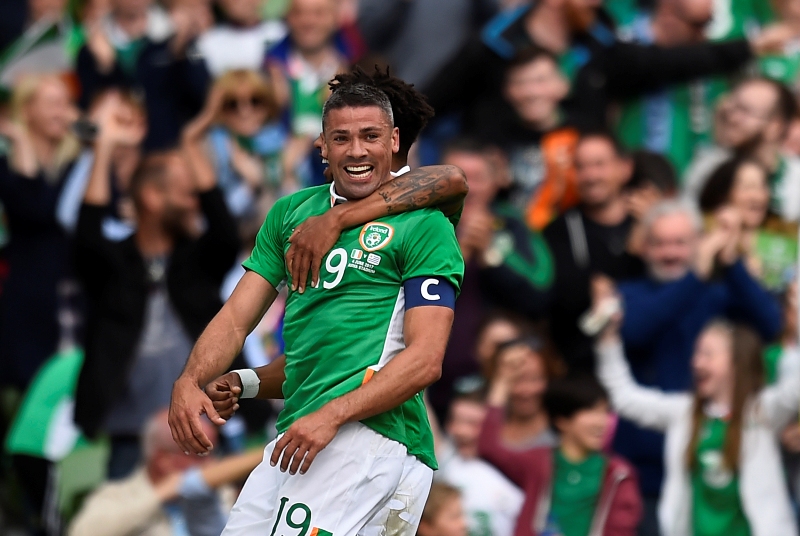 So who are the key men for the Republic of Ireland’s clash with Austria?

Republic of Ireland have not graced the World Cup since their foray into the second round in 2002 – but they have a real chance of reappearing on the game’s biggest stage next summer and excitement levels are rising across the Emerald Isle.

We may only be halfway through qualifying but Ireland are sitting pretty – level on points at the top of Group D with the dangerous Serbia, and four points clear of the much-fancied Austria and the Gareth Bale-inspired Wales.

And before everyone jets off on their summer holidays, there is one more crucial game to come as Austria arrive in Dublin for Sunday’s crucial clash.

Win that and Ireland fans can start dreaming of Russia 2018, but it won’t be easy against a side who many tipped as a dark horse to win the Euros last summer before bowing out in the group stages.

Martin O’Neill’s men have warmed up with two friendlies, a 3-1 loss to Mexico and 3-1 win against Uruguay so will be up for the challenge.

Here, we look at who must play in Sunday’s crucial clash:

A striker for every occasion, Jonathan Walters is the most dependable forward Ireland has right now.

The veteran hardly played for Stoke City this season, and manager Mark Hughes has often shunted Walters out to the right flank when he does get a game.

However, any questions over Walters’ form were quickly dispelled with a sumptuous goal against Uruguay at the weekend – where he bent a delicious 20-yard strike into the top corner.

Stoke fans regard Walters as a big-game player. He has seven career goals against Liverpool, and also fired a brace in the FA Cup semi-final in 2011 when Stoke hammered Bolton 5-0.

This makes him the perfect player for Austria’s visit to the cauldron that is the Aviva Stadium. Robust, energetic and with an eye for goal, don’t be surprised to see Walters add to his 13 international goals.

Ireland are renowned as an industrial side but James McClean provides real flair and is pivotal to Ireland’s hopes this weekend.

Put the pacey winger in the green shirt of his country and he is a creative hub. His goal against Uruguay – where he smashed home a rising shot to seal victory – shows his confidence is sky-high.

McClean captained Ireland in their defeat to Mexico and has become a real leader since Robbie Keane’s retirement.

His form in the first-half of the qualifying campaign has been impressive, with two goals in the 3-1 away win in Moldova.

And it was, of course, McClean who scored that crucial goal in the 1-0 win in Vienna back in November.

Glenn Whelan has been a magnificent servant for Ireland down the years and he thrives when he has an extra man with him in the heart of midfield.

Step forward Harry Arter. The Bournemouth midfielder is the perfect partner for Whelan, he is comfortable in attack and defence and never stops running.

As useful as Wes Hoolahan is, in the bigger matches Ireland will need some added protection and Arter is the right man to provide it.

Seamus Coleman’s horrific broken leg is a massive blow to Ireland, who have lost one of their stand-out stars.

But it has presented an opportunity for others to stand up and be counted and Cyrus Christie has stepped into the fold.

The Derby County full-back was a shining light in the two friendly matches, and is similar to Coleman in that he is a real menace going forward.

His club form dipped towards the end of the campaign but there is no doubt he is a Premier League full-back in the making.

Strong, quick and confident, Christie looks like the man O’Neill trusts to take Coleman’s shirt. He has shown he is more than capable.