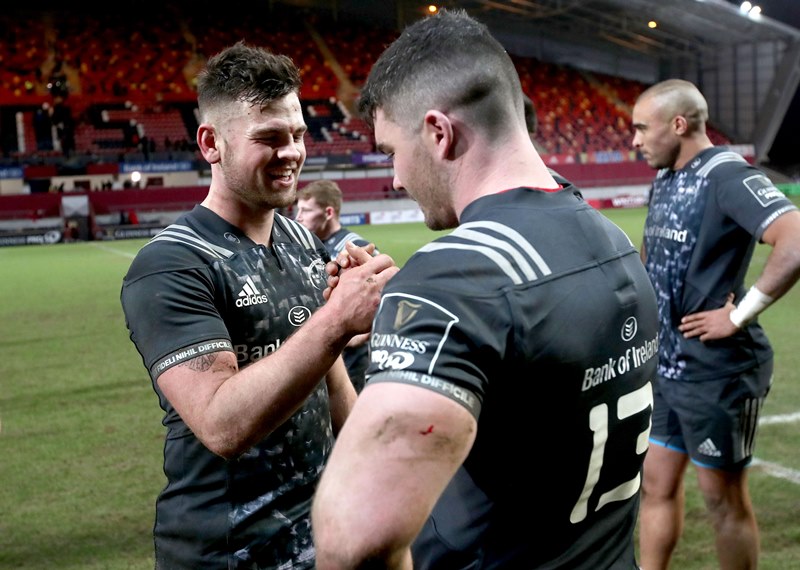 Why this quartet’s new deals are good news for Munster

The news that Sammy Arnold, Darren O’Shea, Conor Oliver and Dan Goggin all signed contract extensions at Munster turned a good week into a great week.

Munster humbled Zebre on Saturday in the Guinness PRO14, winning 33-5, and capitalised on Glasgow Warriors’ draw against the Dragons to move within 12 points of the Scottish side in Conference A.

And with a home Champions Cup quarter-final to look forward to, there is definitely a rosy outlook at Thomond Park

Munster travel to Cardiff Blues on Saturday and we’ve take a look at why hanging on to these four promising players is such great news.

After joining from Ulster in 2016, Arnold had an injury-hit first season with Munster but has made huge progress this season.

He started and finished the scoring against Zebre on the weekend with two of his team’s five tries and has proved to be a handful for opposition teams.

He missed three games after receiving a red card against Ulster in December but was still selected to train with Ireland ahead of the NatWest 6 Nations.

The eldest of this quartet at 25, O’Shea has already had a taste of rugby abroad, at Worcester Warriors in England.

He returned to Munster, the club he supported as a boy, and has spoken about how his experience in England was a great step forward for his career.

Back at Munster, he is determined to hold down a place in the side and clearly has a future in Johann van Graan’s side.

In the absence of a batch of back-row forwards that have been training with the national side, Conor Oliver has stepped up in recent weeks, playing the full 80 minutes against Zebre and looking assured at openside flanker.

The 22-year-old was named Munster’s academy player of the year in 2017 and was tipped by Munster A head coach Peter Malone to go right to the top back in April last year.

He has risen through the ranks and looks certain to make a big impact for Munster, so holding onto him could prove key.

Another academy graduate, the Munster centre has had a few injury problems but made his comeback for Munster A and then played 51 minutes in the win over Zebre.

Goggin has settled nicely into the senior ranks after growing up around the corner from Thomond Park.

He made 10 appearances for the Ireland U20s back in 2014 and it may not be long before he is doing the same for the senior side.