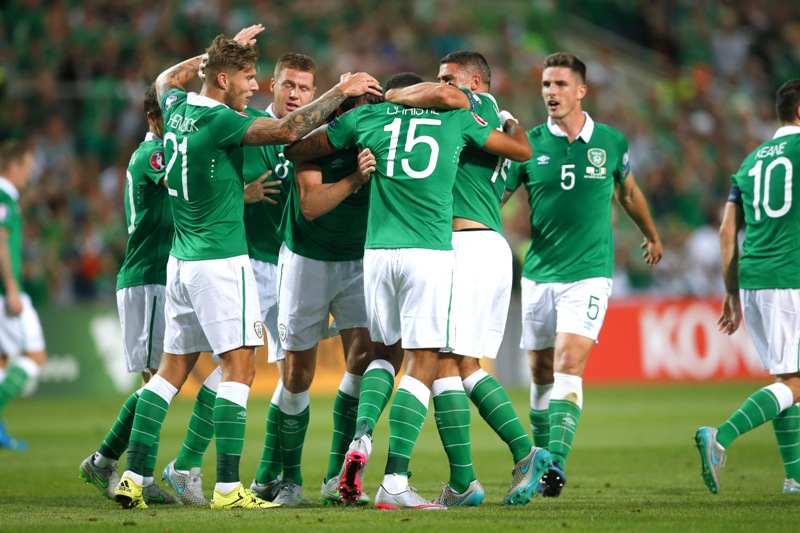 Our guide to Ireland’s Euro 2016 squad

We’re off to a European Championship finals for the third time and we are counting down the minutes until Monday’s opening clash with Sweden in Paris!

Martin O’Neill, who has signed a new two-year deal, has picked the oldest squad that will be in France, with an average age of 29.39 with 11 players aged 30 or over.

Keeper Shay Given could become the first 40-year-old, along with Hungary’s Gabor Kiraly, to play at a European Championship.

There is no substitute for experience though. Here’s our guide to the Boys in Green…

He may be back-up for his Premier League club West Ham but Darren Randolph is likely to start Euro 2016 as our No.1.

The 29-year-old – who has also played international basketball for Ireland – came on against Germany in qualifying after an injury to Shay Given and the County Wicklow-born shot-stopper has not looked back since.

It was after Euro 2012 that Shay Given announced his international retirement but two years ago he reversed that decision and is back in the fold.

At the age of 40, and after a frustrating season at Stoke City, it could prove a struggle for Given to reclaim the No.1 shirt he lost to Randolph.

But with 134 international caps – second only to Robbie Keane in the history books – won since his debut 20 years ago his influence in the training camp will be just as important as anything done on the pitch.

Of our top trio of keepers Keiren Westwood is the only that has been playing regular first-team football this season for Sheffield Wednesday.

The 31-year-old equalled the Owls club record for clean sheets in a single campaign as they narrowly missed out on promotion to the Premier League, losing in the play-off final to Hull City last month.

Cyrus Christie made his international bow in November 2014 and while he has only earned four caps since then – and is likely to start the Euros as back-up to Seamus Coleman – he has already proven a hit.

The Derby County star, who qualifiers for Ireland through his grandmother from Dublin, scored against Gibraltar and was superb in the qualifying win over Germany. 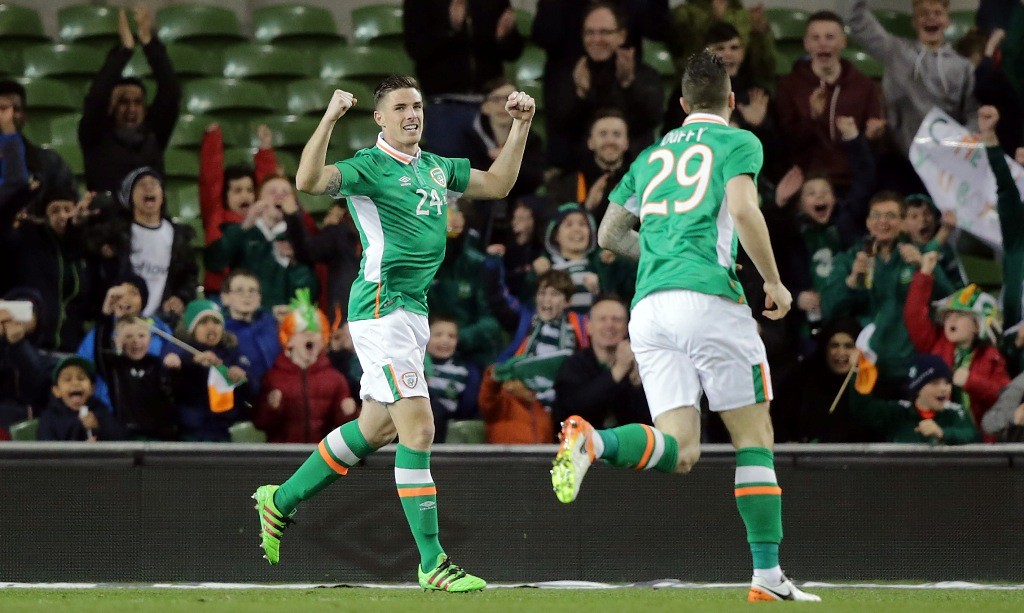 The 26-year-old centre-back endured a season to forget with club side Aston Villa, but Ciaran Clark has been consistent for his country.

A one-club man having been a star of Villa’s academy, Clark has started four of Ireland’s last six matches to bring his tally of international caps up to 18.

Despite not necessarily being at his best for Everton this season, Seamus Coleman is undoubtedly one of the first names on O’Neill’s team sheet.

But for injury he would have won far more than his 34 caps and you can be certain that any other of the home nations would swap him in to their line-ups in an instant.

The 24-year-old is a star of the future for O’Neill’s side with 41 appearances in all competitions for Blackburn Rovers this season.

He set up Ciaran Clark for the only goal of the game against Switzerland in March where he also won man of the match, and could yet challenge Richard Keogh for a spot at the heart of defence.

Richard Keogh is a man who clearly has the faith of O’Neill, having started in both legs of our qualification play-off victory over Bosnia-Herzegovina.

If he can show the same leadership he has as captain of Derby County for Ireland, he undeniably can be a greater leader of the side during the Championships than his 11 caps would suggest.

At 35, this could well be John O’Shea’s swansong in an Ireland shirt and a successful tournament would be no less than a bonafide legend deserves.

The former Manchester United star has racked up 110 caps since making his Ireland bow in 2001 and comes into the Euros having just helped Sunderland successfully avoid Premier League relegation.

Stephen Ward heads to France in possibly the finest form of his career after playing a key role in the second half of Burnley’s promotion campaign back to the Premier League.

The 30-year-old left-back had only played 12 Championship minutes prior to Christmas but, after winning back his place, cemented a spot in O’Neill’s 23-man squad.

Robbie Brady has found his niche at left-back since moving to Norwich last summer and also plays a crucial role as Ireland’s main set-piece taker.
The 24-year-old suffered a back spasm earlier this week though O’Neill is not unduly worried, as he remains hopeful his man will line up in our opener against Sweden.

The man was once head-butted by Alan Pardew might be David Meyler’s claim to fame across the Irish Sea.

But we know and love the 27-year-old one-time Gaelic footballer as a combative midfielder, not afraid to roll his sleeves up when it matters.

Brother of Alan and Keith, Stephen Quinn possesses a cultured left foot and his cool head earned him a start as one of O’Neill’s trusted lieutenants in the away qualifier with Germany.

Currently plying his trade at Reading, Quinn will hope to add to his 14 caps in France.

Late-blooming playmaker Wes Hoolahan was omitted from Giovanni Trapattoni’s squad for Euro 2012, but the Norwich City midfielder is now a key figure in O’Neill’s plans.

At 34, he is no spring chicken, but Hoolahan is playing like a man ten years younger after overhauling his diet and fitness regime. He will be critical against the packed Italian and Belgian midfields.

James McCarthy reported for international duty with groin and hamstring injuries picked up in Everton’s final-day victory over Norwich. But he moved to allay any fears this would keep him out of the tournament and was duly named in O’Neill squad.

Fingers and toes crossed the grafting midfielder can pull through in time to start against the Swedes.

One to Watch: Jeff Hendrick

Dubliner Jeff Hendrick has returned to fitness just in time for our Euros tilt after returning to action in Derby County’s play-off campaign.
This will be the 24-year-old’s first international tournament, though with 18 caps now under his belt, the midfielder is growing in influence within the Ireland camp.

Such is the ferocity of our no-nonsense winger, James McClean is rumoured to have been told to calm down by assistant manager Roy Keane.

But no one would ever question McClean’s commitment, he is a driving presence in our ranks and his infectious enthusiasm could prove crucial as games wear on.

The former Celtic man, now of Everton, went out on loan to Sheffield Wednesday after a lack of game-time under Roberto Martinez.

But Aiden McGeady turned things around to make 13 appearances for the Owls and secure his place in France.

He grabbed a brace against Georgia in qualifying – including a spectacular effort in the closing stages.

The Stoke City man is the lynchpin of our midfield. Glenn Whelan has won 71 international caps, scoring two goals, and has been a virtual mainstay in the midfield for eight years.

How well he does his job screening the back four could well determine how far we go.

Captain, leader, record-breaker. No-one has played more times or scored more goals for the Boys in Green than Robbie Keane.

At 35, the LA Galaxy forward may be past his prime and no longer the first name on the team sheet but, if we’re desperate for a goal, who better to bring off the bench?

Oh Shane, wonderful Shane. His winner in the home qualifier with Germany kept us warm in the winter.

But with the sun shining on France it’s time for the lethal Southampton striker to make more memories.

The 33-year-old’s ability to play as adeptly on the left flank as through the middle should provide fine balance to the Ireland front line.

He hit 27 goals in the 2014/15 season to finish as the Championship’s top-goalscorer, but in 20 caps he is yet to open his international account.

Five goals in qualifying, including both in the play-off defeat of Bosnia-Herzegovina, has made Jonathan Walters a hero on these shores.

His athleticism and no-nonsense direct style of play is bound to scare the life out of Europe’s top defenders. Expect the Stoke City man to add to his 39 caps and 10 goals before the summer is out.