THE brutality of T20 cricket has well and truly permeated the 50-over game, but it was back in 2011 that an Irishman set the standard on the world stage. 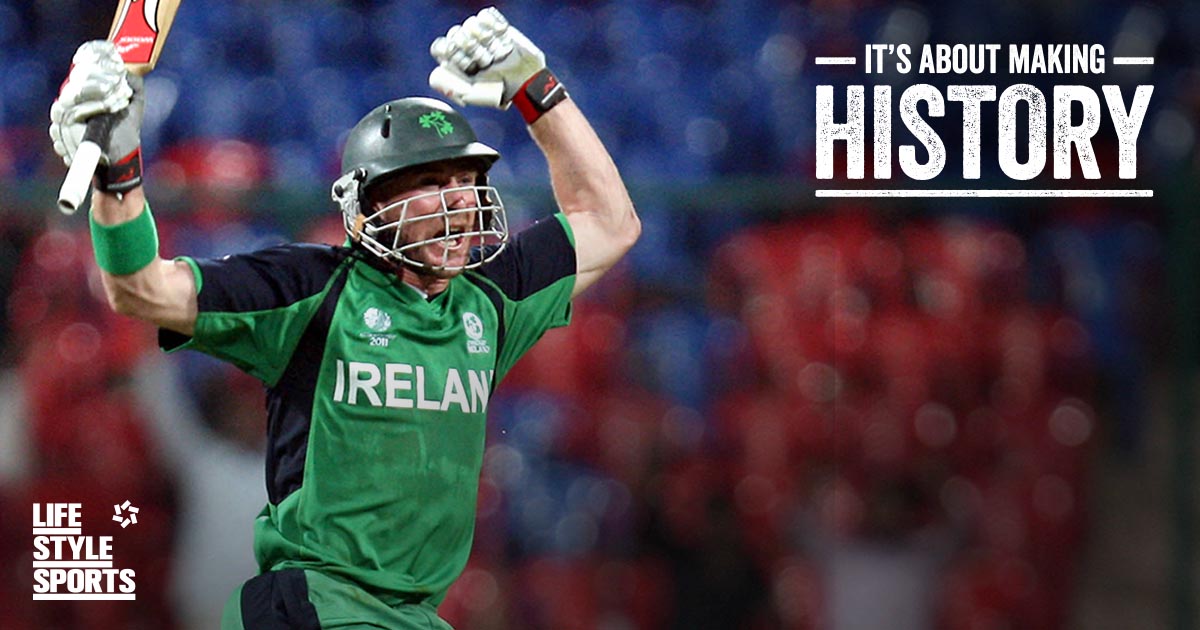 However, it is Kevin O’Brien – the red-headed all-rounder from Dublin – who still holds the world’s best at arm’s length when it comes to that particular record, thanks to a memorable knock in Bangalore.

It’s probably the best innings I’ve ever played,” said O’Brien. “I just chanced my arm and said I was going to be as positive as I can. I got a few away and didn’t look back.”

O’Brien was no household name when Ireland met England in during the 2011 World Cup, but he soon would be.

England batted first and raced away, Kevin Pietersen setting the ball rolling before Jonathan Trott and Ian Bell took them most of the way towards 327-8. Don’t be fooled by the eye-watering scores of this year’s World Cup, 328 represented a mammoth target back in 2011.

To make matters worse the chase was in trouble immediately, as captain William Porterfield was dismissed with the first ball of the innings, and O’Brien soon arrived at the crease with the scoreboard reading 106-4.

A re-building job was required but the new batsman had other ideas, soon clubbing spinner Graeme Swann over the leg-side boundary twice in the space of three deliveries.

O’Brien had laid down a marker for what was to come – a brutal knock of world-class calibre, the likes of which had never been witnessed on the world stage.

Before that day the fastest ever World Cup century belonged to Matthew Hayden, which arrived in 66 balls – O’Brien was at three figures after just 50.

He was eventually run out for 113 but most of the damage had been done and Ireland coasted over the line for the most famous result in our cricketing history.

“We got ourselves into a position of such dominance,” reflected Swann after the match. “To then have it taken away from us is quite shell-shocking.

“Every now and again someone wakes up and has the best day of their life and Kevin O’Brien did that.

You’re not wrong there Swanny!

Life Style Sports is backing Ireland this year to become world champions and create their own piece of Irish sporting history. The new range of Irish Rugby jerseys and training kit is now available in store and online to purchase.  Click here to show your support. Together #ForVictory.