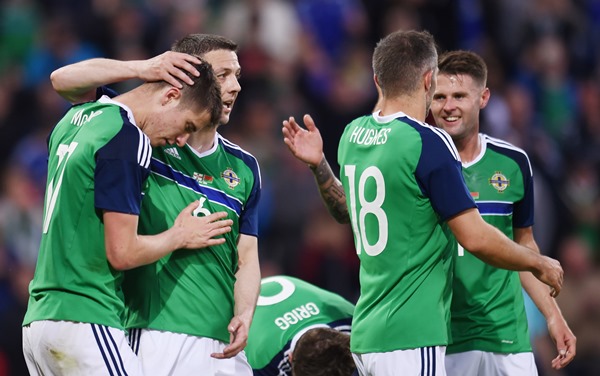 France are the hosts, Germany the world champions, Spain the defending champions, but when it comes to the longest unbeaten run of any team in Euro 2016, it’s Northern Ireland who lead the way.

Under Michael O’Neill, Northern Ireland are unbeaten in 12 heading into their first European Championships, and their first major tournament since the 1986 World Cup in Mexico.

On Sunday they face the most prolific side in qualifying in Nice as they look to slow down the devastating Robert Lewandowski.

Poland were hosts of the 2012 tournament four years ago but are yet to win a match in the Euros.

Northern Ireland qualified by topping a pool featuring Romania, Hungary and Greece, while Poland came in second to Germany in their group.

Northern Ireland were dealt a major blow before the tournament when striker Chris Brunt was ruled out with a ligament injury but Kyle Lafferty appears to have shaken off a knock and should take his place up front.

Their record in qualifying was based on strong defence and creating chances from set-pieces and working hard when they don’t have the ball.

Their defence will feature a number of players who aren’t playing top-flight football, which could prove an issue in a very tough group that also features Germany and the Ukraine.

Poland coach Adam Nawalka has changed the formation since taking over as boss, playing two up front to provide Robert Lewandowski with greater support.

It appeared to pay off with Lewandowski scoring 13 goals in qualifying and he will be a threat throughout the tournament once more.

Elsewhere there are some familiar faces, including Borussia Dortmund full-back Lukasz Piszczek, but Maciej Rybus who would have played opposite him has been ruled out, as has Pawel Wszolek.

With Chris Brunt absent, Lafferty is the key man up front for Michael O’Neill but a groin strain had put his participation in the opener in doubt.

He has shaken that off though and should lead the line against Poland as Northern Ireland aim to start with a bang.

Rarely used by Norwich this season, Lafferty has a good international scoring record, with 17 goals in 51 games and insists he is ready to go.

“It’s feeling good,” he said. “Seeing the way I fell, the way I landed, I thought the worst, but I came through it and got the scan results which were all clear and I’ve never felt better.

“When I had the sharpest pain in my groin I thought the worst, as you do, but the longer the day went on, I started feeling better as I was getting more stiff and that was probably a good sign.

“I went for a scan and the results came back clear and it gave me the go-ahead to start training intense again. I have and I feel great.”

With 13 of Poland’s 33 goals in qualifying, Lewandowski underlined his status as one of the most dangerous players in front of goal.

The Bayern Munich striker appeared to gel perfectly with Arkadiusz Milik up front and the duo will be a real concern for Michael O’Neill, who knows that keeping a clean sheet is vital for his team’s chances.

Real Madrid are among the teams who have shown an interest in Lewandowski this summer but Bayern have no intention of letting him go, with technical director Michael Reschke describing him as the world’s best striker, having been linked to Argentinian front man Gonzalo Higuain.

“Gonzalo Higuain is one of the three or four best strikers in the world, but we’ve got the very best right now with Lewandowski,” said Reschke.

“That is why it makes no sense for us or for the player to sign another striker.”

The teams last met in qualifying for the 2010 World Cup, with Northern Ireland winning 3-2 at home before drawing 1-1 away in Poland when Kyle Lafferty opened the scoring.

Before those encounters Poland had won three straight against Northern Ireland.

The last meeting between the two in the European Championships came in qualifying in 1962 when Northern Ireland won both games 2-0.