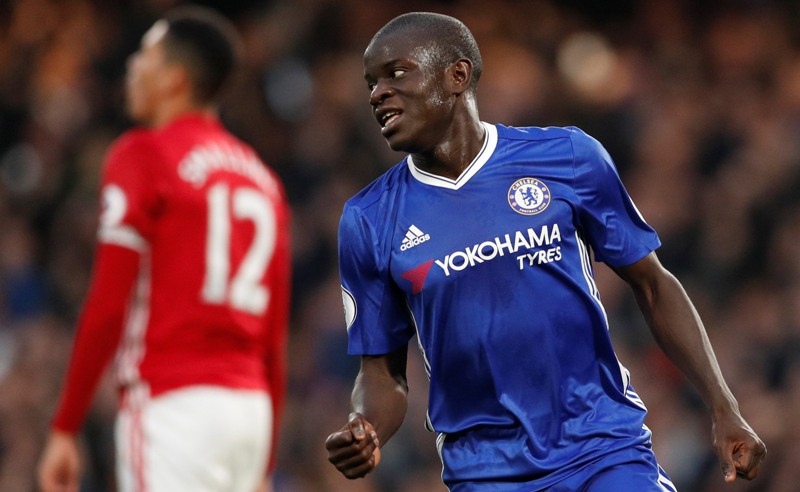 It’s been quite an 18 months in the Premier League for N’Golo Kante and, just like last season, he finds himself in the team at the top of the league table.

Last year it was Leicester City but after a £30m transfer in the summer, he’s been an integral part of Antonio Conte’s Chelsea side that are storming towards the league title.

The French international was an absolute steal compared to this weekend’s opponents Manchester United’s £89m deal to bring Paul Pogba to Old Trafford and has arguably already had a bigger effect.

With Jamie Vardy and Riyad Mahrez taking plenty of headlines last season, a lot of Kante’s tackling, winning the ball back and interceptions went unnoticed in the early going.

But he was integral to Leicester’s fairytale campaign and that has been all the more evident in their disappointing season to date, which has seen the manager Claudio Ranieri sacked.

Last year Kante won 23 of the 37 Premier League games in which he featured and in total has been victorious in 46 of the 67 matches he’s played.

After Chelsea’s 4-0 win over the Red Devils earlier in the season, Jose Mourinho will be looking for a very different result at Old Trafford on Sunday.

But this season’s draw specialists will need something magical from the likes of Pogba and Zlatan Ibrahimovic if they’re to get past Kante and co.

Kante has made 105 tackles in the Premier League this season, only Everton’s Idrissa Gueye has more, while Manchester United’s top tackler is Ander Herrera with 69.

The Kante effect is not just felt in defence though, he has made 235 recoveries this season (compared to Herrera’s 174) and is the fourth-highest passer in the league with 1,840.

Cesar Azpilicueta has made more passes, as has Pogba, but the numbers demonstrate that Kante can set the likes of Eden Hazard and Diego Costa into space as well as break up the play.

He also has one goal, against Sunday’s opponent’s United, and many Chelsea fans would love to see him pop up with another crucial effort against their former manager.