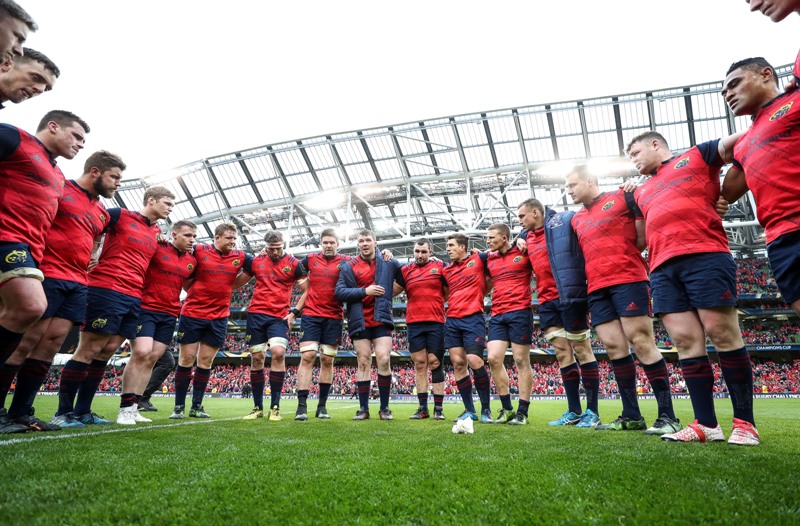 After narrowly missing out in the Champions Cup at the semi-final stage, Munster’s sole focus is now reclaiming the Guinness PRO12 title for the first time since 2011.

Munster were beaten by a clinical Saracens side 26-10 at the Aviva Stadium on Saturday and will now turn their attention to their final two fixtures in the PRO12 as they look to secure a home semi-final spot alongside compatriots Leinster.

The current points differential in the league standings means that Munster and Scarlets are both battling for home advantage as the league reaches the knockout stages and here we take a look at the permutations surrounding Munster’s bid for a home semi-final.

Munster’s superb record in the league so far – winning 17 of their 20 fixtures to date – has left the Limerick-based outfit needing just one win from their final two matches to secure a home semi-final.

Round 21 sees the three-time league winners travel to Benetton Treviso on Saturday evening with the Italian side in good form gaining two victories form their last three fixtures.

But the Munster faithful will be full of confidence ahead of their fixture with Treviso having beaten them in 16 of their 19 meetings including a 46-3 thumping in Round Nine.

Should the Italians cause a major upset and down the high-flying men in red, Scarlets would have to defeat Connacht in Galway to ensure the battle goes down to the final day of the PRO12 season.

Munster have the luxury of two bites at the cherry this season and could be left needing a victory over 2016 PRO12 champions Connacht in Round 22 to secure a home semi-final which could prove vital to their title bid.

If, as we all hope, Munster secure a home semi-final with a victory in Treviso – there is a quartet of potential opponents facing the trip to Limerick.

Scarlets and Ospreys currently occupy third and fourth spot respectively – with Ulster nipping at their heels in fifth – as they chase semi-final berths of their own.

And the two Welsh sides face off on the final day of the season at Parc y Scarlets which would make for mouth-watering viewing as they could be playing out an effectual quarter-final.

If history is any indicator, Munster would prefer to play Scarlets in the semi-finals having beaten the Welsh region on 23 occasions across their 36 league meetings.

Their record against the Ospreys is less impressive with 19 victories from 36 matches but they have notched up two victories against them in this campaign whereas the Scarlets ended Munster’s nine-game unbeaten run in Round 16 with a 30-21 win in Ireland.

Though less likely opponents, Ulster and Glasgow Warriors still maintain hope of making it to the semi-final stage and could be the visitors to Limerick in a few weeks time should Munster claim home advantage.

Ulster sit just a point behind Ospreys in fifth but travel to Swansea to take on the Welsh region in Round 21 and will be aware that a victory could be enough to secure them fourth spot should Scarlets also turn over Ospreys on the final day.

Ulster though take on Leinster in Belfast on the final day and may be required to beat the current league-leaders to secure a semi-final spot.

Although unlikely to feature in the semi-finals for the sixth consecutive season, Glasgow Warriors are still mathematically in the hunt.

After a big win over Zebre in Round 20, Warriors take on Leinster in Dublin before hosting Edinburgh on the final day.

The 2015 champions will likely require two victories to have any chance of featuring in the semi-finals but they cannot be mathematically ruled out just yet.