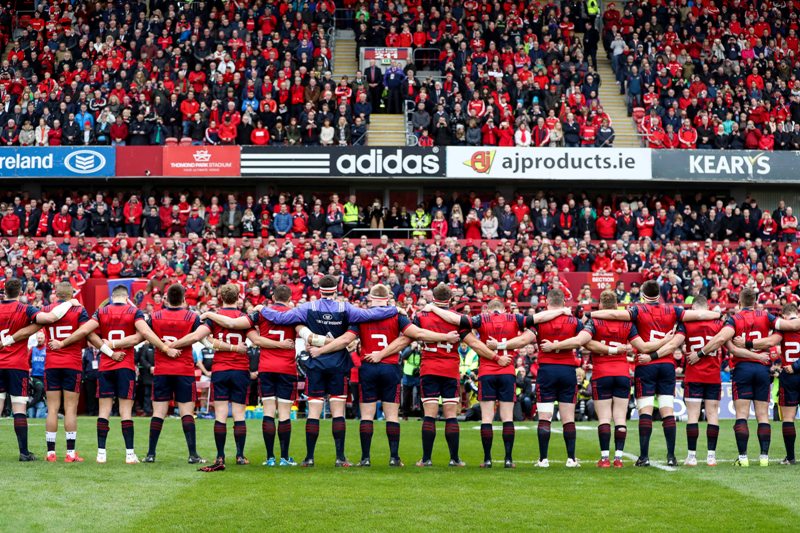 Munster Rugby lost their first domestic match since October after the Scarlets mounted a comeback at thrilling Thomond Park, but the Limerick side are still harbouring genuine hopes of a double-winning season.

Munster sit third in the Guinness PRO12, just two points behind Leinster Rugby at the top of the table and look forward to a European Champions Cup quarter-final with French giants Toulouse in April.

And the Irish province have already welcomed three new signings to Thomond Park to bolster their squad for next season.

We take a look at what Munster’s three new boys will bring to the side next season.

Born in the province of Munster, Irish playmaker Hanrahan returns home after two years in the Aviva Premiership with Northampton Saints.

He made his last appearance for Munster in May 2015 in the Guinness PRO12 Grand Final defeat to Glasgow Warriors when he came off the bench as his side lost 31-13.

Hanrahan has made 29 appearances for Saints in several different positions since his arrival in 2015, scoring 47 points and was part of the side that narrowly missed out on the Aviva Premiership play-offs at the end of last season.

Primarily a fly-half, the versatile Hanrahan has made starts at centre and full-back and his versatility will be a huge asset to the Munster coaching staff next season.

Having played second fiddle to Northampton stalwart Stephen Myler for most of his time in England, Hanrahan will be hoping to gain some more game time before he returns to Limerick.

Farrell, 23, will complete his move to Munster after making over 70 appearances in three seasons for Grenoble.

After making his professional debut for Ulster at the age of just 18, Farrell made just five appearances for the Northern Irish province until his move to the Top 14 in 2014.

The centre will bring experience of playing abroad that very few Irish players have experienced and his power and size will give Munster a ball carrying option in midfield.

At 1.96m and 103kg, Farrell adds his fair share of power to any back division, and his defensive capabilities will be something that Munster Director of Rugby Rassie Erasmus will welcome with open arms.

At the end of January, with his Munster contract signed, Farrell featured for Grenoble in their thrilling 44-22 victory over Stade Francais in just their fourth win all season.

And Farrell will be hoping to thrive in the winning culture that has been forged at Munster this season when he arrives in the summer.

Scrum-half Hart will join Munster from Top 14 champions Racing 92 having spent just one season in Paris.

Hart’s move came after former Irish international Tomas O’Leary announced he would not be returning from a loan spell at Montpellier.

Hart played at Grenoble for five seasons before making the move to the French capital where he has competed with French international Maxime Machenaud and Xavier Chauveau for the number nine jersey.

Hart will be able to draw on experience of daily training with accomplished internationals such as Dan Carter, Juan Imhoff and Joe Rokocoko when he arrives at Thomond Park.

But, with the in-form Irishman Conor Murray firmly nailed on as club and country first-choice number nine, Hart will have another fight on his hands if he is to make a big impact at Munster.