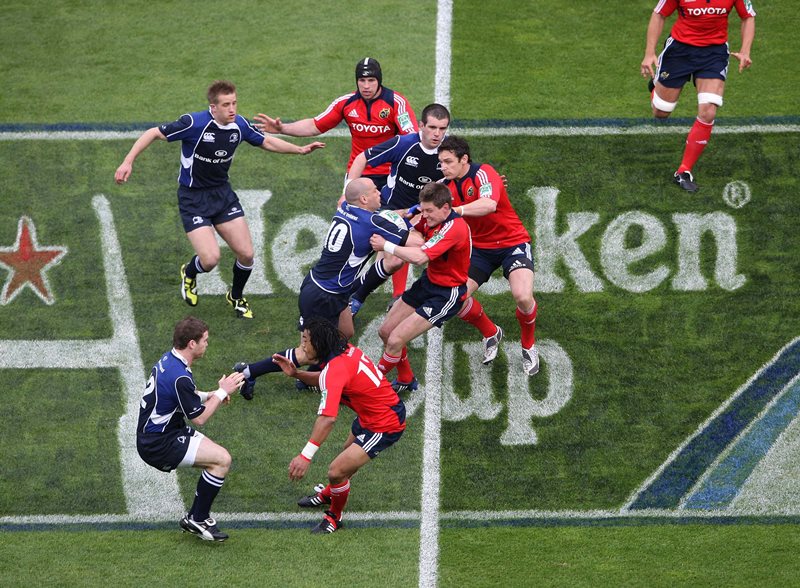 St. Stephen’s Day throws up a real treat this year as two of the hardest hitters in the game – Leinster and Munster – renew acquaintances for a good old festive tussle.

A sold out Thomond Park is the venue and the participants are two sides bang in form, having each completed back-to-back wins over strong English sides in the Champions Cup in recent weeks, with Leinster dispatching Exeter and Munster downing Leicester Tigers.

The two old enemies have already met once this season, with the men from Dublin coming out on top 23-17 in October.

But to get you into the swing of things, we’ve take a look back at three of the best-ever clashes between Ireland’s fiercest pugilists.

This was the game where the rivalry between these two massive clubs seemed to step up a notch, with Munster delivering a huge win at Lansdowne Road in front of a bumper crowd in a European Cup semi-final.

All the big names were there for Leinster – Brian O’Driscoll, Gordon D’Arcy and Felipe Contepomi – but it was the men from the south who rose to the occasion, with Paul O’Connell delivering a totemic display that would become so common years later.

The giant lock picked a lineout from the air one-handed early on to help set up Denis Leamy’s score and Ronan O’Gara’s boot kept Munster ahead.

The men in blue never looked comfortable and late scores from O’Gara and Trevor Halstead merely confirmed the inevitable, helping to build the fearsome European reputation that Munster now hold.

By the time of this game, the red army had already beaten the side from the capital twice in the 2008-09 season, but came swiftly undone at Croke Park.

D’Arcy’s try was a thing of beauty, with O’Driscoll playing in Ica Nacewa through the middle and the New Zealander sending out a fine pass for the centre to slide over in the corner.

There were two penalties for the ever-reliable O’Gara but it was not to be Munster’s day as Luke Fitzgerald got on the scoresheet, with Johnny Sexton adding a penalty and Contepomi a drop goal.

The game was still up for grabs going into the final quarter, with Leinster 18-6 up, but then came the moment that still gives Munster fans nightmares – the mercurial O’Driscoll picking off a pass and racing away to seal a famous win.

Thomond Park also was the venue for this epic clash, with both teams knocking seven bells out of each other, only for the result to be settled with a kick at the death.

The Leinstermen had the better of the first 40, with Shane Horgan crossing on his 200th appearance to give his side a 20-9 lead at the interval.

But O’Gara and Paul Warwick kept the men in red in the contest with the boot.

Sexton gave the Dublin side a 23-21 lead going into the last ten but up stepped O’Gara once again to split the posts and break Leinster hearts.

THE LATEST RANGE OF MUNSTER AND LEINSTER RUGBY JERSEYS, TRAINING WEAR AND FAN-WEAR ARE AVAILABLE TO PURCHASE IN STORE AND ONLINE. CLICK HERE TO SHOP NOW.