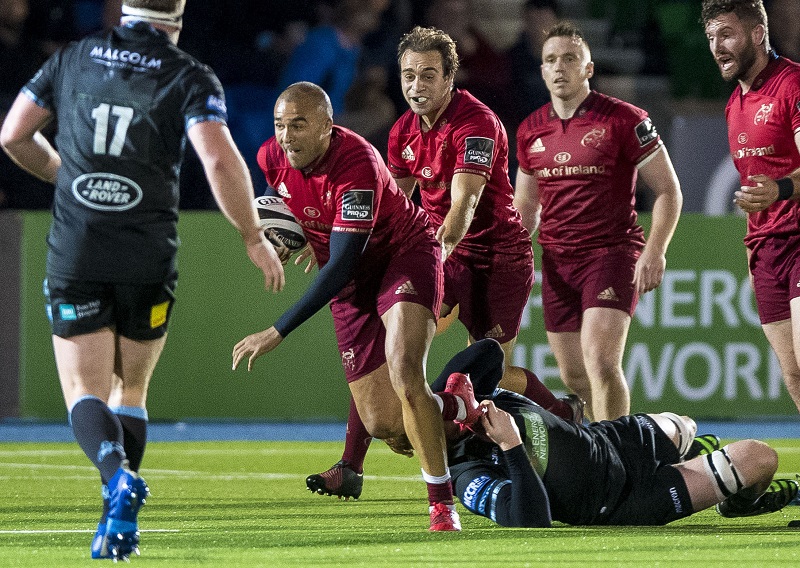 The top two in Conference A of the Guinness PRO14 go head to head this weekend in a crucial battle with only five games remaining after this round.

Munster currently sit second on 49 points, 16 behind leaders Glasgow, and the three-time Championship winners will be eager to cut that lead this weekend if they are to have any chance of reeling in Dave Rennie’s team.

The Warriors head the table, having already secured their place in the Guinness PRO14 Final Series thanks to their record-setting pace which has returned 65 points in their first 15 games – beating the previous mark of 58 after 15 rounds.

What happened in the last round:

Triumph will not be an easy feat for Munster, having suffered a 25-18 defeat at the hands of Cardiff Blues last time out after dominating possession in the second half but failing to take their chances.

Johaan van Graan made ten changes to the team that breezed past Zebre in Round 14, but it led to a disjointed performance in the first half from his team, conceding 19 points and only scoring one unconverted try.

Munster looked stronger in the second half but didn’t convert their large share of territory and possession into points.

Glasgow, on the other hand, saw off a persistent Cheetahs team with an impressive 37-23 win at home.

The South Africans put up a fight, but the Scots showed great determination and ground out a hard-fought victory to extend their lead at the top of the table.

What happened in the reverse fixture:

The Warriors ended Munster’s three-match winning streak at the start of the season with a bonus-point win at Scotstoun.

Glasgow crossed the whitewash four times, with Finn Russell converting all four scores and adding three penalties to make it 37-10.

The Irish will take confidence from the stats however, as the figures showed that the Warriors only had 51% possession and the same percentage of territory, only made one more tackle throughout the match.

Munster did the double over their Scottish rivals last year with two narrow victories, winning 16-15 in December 2016 and 10-7 in April.

In the first encounter last season the Irish managed a slender one point victory at the Scotstoun, as Ian Keatley slotted a drop-goal with only four minutes to play in a dramatic game.

Then in the return fixture at Cork, Munster held off a late comeback from the Scots as Stuart Hogg scored a try to cut the hosts’ lead to three points with ten minutes to play.

Munster will be glad of Nick Grigg’s call up to the Scottish team after a man-of-the-match performance for Glasgow against the Cheetahs, as Gregor Townsend chooses the centre on the bench to take on England.

One player who will be playing is Simon Zebo, who will make his final appearance in a Munster shirt at Independent Park on Friday night.

A bumper crowd is expected for Zebo’s last game in Cork before he departs for Racing 92 next summer, after the 27-year-old scored 59 tries in 137 appearances for Munster.