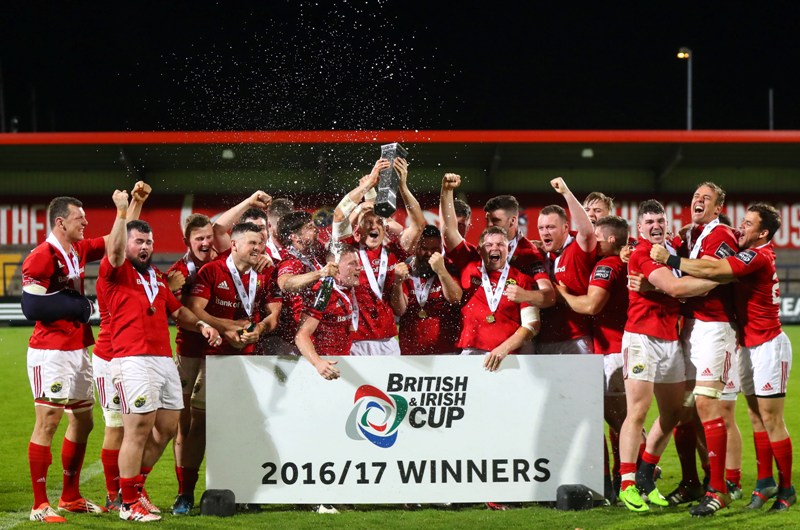 Munster A bagged their second ever British & Irish Cup win last month as the club continues to go from strength to strength.

The first XV fell narrowly short in the European Champions Cup that same weekend, knocked out by reigning champions Saracens, but the future is clearly bright in Limerick.

From 18-0 down, all the typical Munster fighting spirit and passion for the shirt was on show as Munster A fought back to claim a historic 29-28 win over Jersey Reds.

There were heroes all over the pitch and, prior to this weekend’s game against Connacht, we identify three men we’re excited to see progress to the full Munster squad in the coming years.

An excellent break from the winger was key to Munster’s second try of the final, scored by Kevin O’Byrne and the 22-year-old popped up with a spectacular try of his own late on.

The winger was under plenty of pressure when he received the ball from Cian Bohane in the final moments but was able to step past two defenders to put Munster A ahead for the first time.

Wootton, a former Ireland under-20s representative, followed up his fine individual score in the cup final with another try on Munster’s recent trip to Treviso. Let’s hope it’s the first of many.

Trailing by 18 points, Coombes’ try before half-time was crucial to kick-starting the Munster A comeback in the British & Irish Cup final.

Unlike Wootton’s it was by no means a classic, a close-range drive from the back of a ruck, but his all-round performance demonstrated what the flanker is all about.

Coombes was part of Ireland under-20s Six Nations campaign earlier in 2017 as they picked up three wins, and we expect his stock to continue to rise.

Johnston was brought into the ten jersey for the B&I Cup final after an injury to his brother Bill but scored a try and slotted nine points with the boot.

The fly-half, who won the Munster School’s Senior Cup with Rockwell, converted three of the four tries against Jersey and a penalty.

He’s on a development contract this season and will be on a full contract next year, so expect to see more of Johnston over the coming months.