McGregor – champion of the world

WHEN Coach John Kavanagh woke Conor McGregor from a nap to tell him that his opponent at UFC 189 had changed the Dubliner’s reaction was to briefly open his eyes and say ‘they’re all the same‘.

It was a response that should have surprised no one given McGregor’s unshakeable self-belief but, to mixed martial arts fans, it was just so hard to understand. The 27-year-old was originally slated to fight Jose Aldo for the UFC featherweight title in one of, if not the, most eagerly anticipated bouts in the sport’s history.

But, with two weeks to go before the fight, the Brazilian withdrew due to a rib injury and American Chad Mendes stepped up to the plate to fight for the interim title. For all his talents there were plenty who believed that McGregor had talked his way into a title shot without ever being pitted against an elite wrestler and a matchup with Mendes was far more compelling.

McGregor had five victories from five UFC fights and his ability to strike was plain for all to see with four TKOs to his name – the fifth a unanimous decision win over Max Holloway after the Dubliner battled through a torn ACL sustained in the second round.

But Mendes was a different beast altogether, how would McGregor fare against the best wrestler in the featherweight division?

The prophetic McGregor believed the answer would come inside two rounds and the travelling Irish would be celebrating their first world title but, for most, that prospect seemed so farfetched. Mendes was a fighter that had only been defeated twice and both times by the pound-for-pound number one fighter on the planet – Aldo. 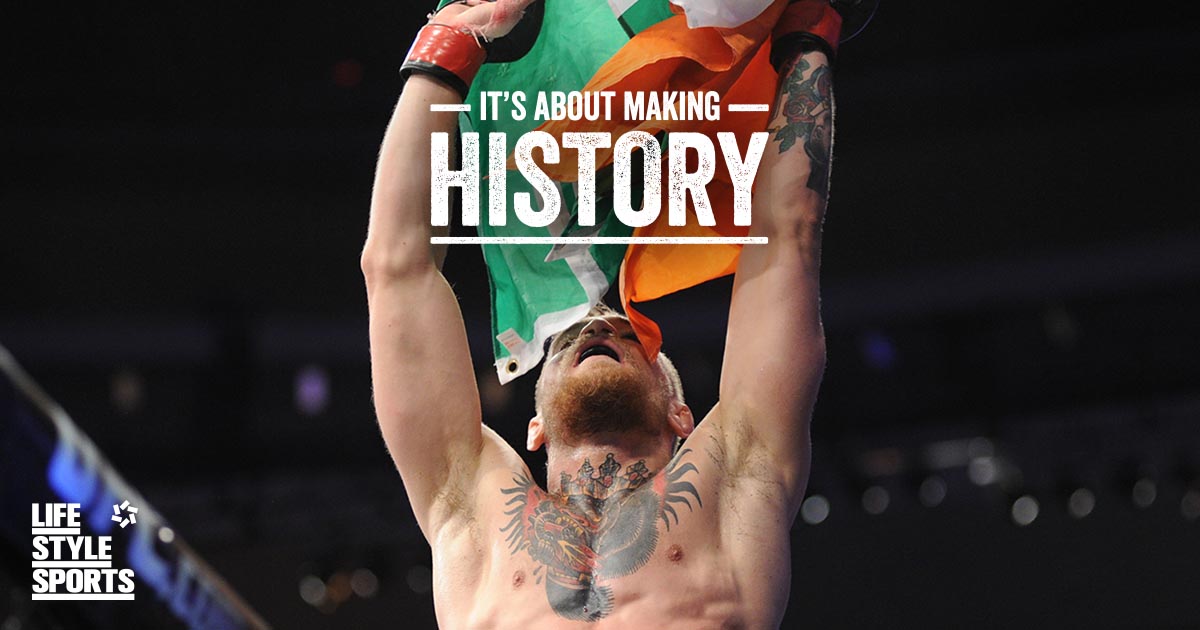 UFC 189 witnessed the birth of a superstar on so many levels with 11,500 fans turning up to watch the weigh-ins alone and Sinead O’Connor making an appearance to send her countryman into battle.

As the bout began McGregor rushed out and immediately began to pressure Mendes with a flurry of kicks setting up his devastatingly accurate boxing. Mendes responded though and McGregor quickly found himself on his back and face-to-face with the style of fighting he had apparently been protected from up until that point.

The Irishman popped back up and began to dominate the stand-up exchanges before Mendes once again took the fight to the ground – McGregor, it seemed, had no answer to the powerful takedowns of his opponent.

But for every shot that the American landed McGregor would talk and respond with a simple ‘nope’ and, with time ticking down in the second, he escaped an attempted guillotine choke, stood up and began to unload.

Mendes was in trouble, worn down from the assault on body and head from McGregor and a body kick set up the signature straight left to the jaw that would send the American to the canvas and force the referee to intervene.

Suddenly it wasn’t just talk. It wasn’t all hype. McGregor famously said the Irish ‘weren’t here to take part but to take over’ and the country’s brightest sporting star was now the champion of the world.