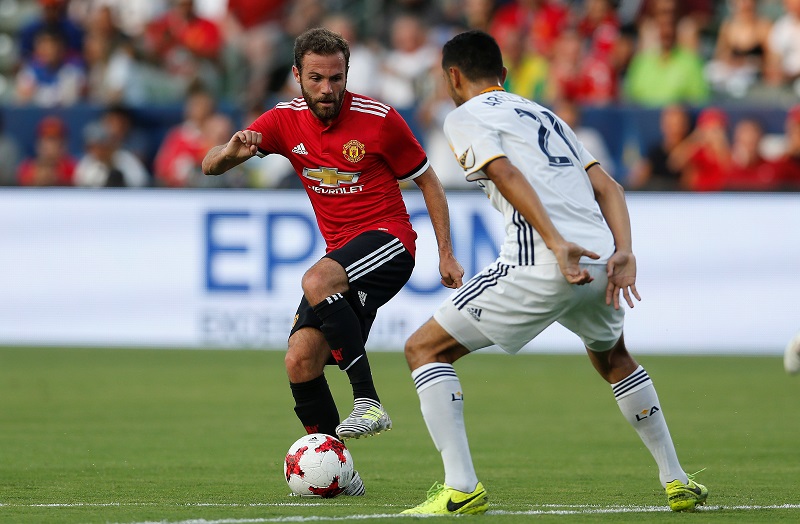 Jose Mourinho is currently grilling the Manchester United players in the Los Angeles heat as the Red Devils are put through their paces in pre-season.

The United boss has already splashed the cash on Romelu Lukaku and Victor Lindelof this summer as he looks to challenge for the title.

And following their recent home kit launch, we thought we would delve into the archives and share some of United’s greatest Premier League moments down the years.

Something to jump for joy about

‘Fergie time’ had first been coined some years previous but on April 10, 1993, Manchester United experienced the phenomenon at its devastating and dramatic best.

Still haunted by the collapse of their 1991-92 Division One title challenge, Alex Ferguson’s side – he had yet to earn the address ‘Sir’ – trailed Sheffield Wednesday 1-0 at Old Trafford and were en route to suffering a huge psychological blow in their battle with Ron Atkinson’s Aston Villa.

But with less than five minutes of normal time remaining, Steve Bruce rocketed home a long-range header from an inswinging Denis Irwin corner.

Then, six minutes into added time, current Villa manager Bruce, in those days an inspirational centre-half, expertly guided home a second headed effort past Chris Woods after Gary Pallister’s cross had been deflected by Nigel Worthington.

Bruce’s dramatic winner sparked those iconic celebrations from Ferguson and his assistant Brian Kidd and proved the springboard for United winning the newly-formed Premier League.

The former villain becomes a hero

It’s perhaps often overlooked that Michael Owen won the Ballon d’Or during his time at Liverpool, so his move to United in July 2009 was clearly more than somewhat controversial.

However, during his three-year spell at Old Trafford, during which he won the title, the former Anfield favourite played a part in one of the Red Devils’ most dramatic Premier League moments.

More fool you if you thought that was the end of the drama.

With 96 minutes on the clock, almost as if he had waved a magic wand to freeze the City defence, Ryan Giggs expertly slipped a pass into the feet of Owen, who took one touch before toe-poking home and raising the roof on Old Trafford.

Some moments are so etched into the fabric of the Premier League that almost every football fan of the requisite age could recount them vividly if you asked them to and on August 17, 1996, David Beckham produced such an event.

The fact that the midfielder’s goal against Wimbledon at Selhurst Park was a 90th-minute effort that added gloss to a 3-0 United victory on the opening day of the season has paled into insignificance, such was the audacity of the way in which Beckham managed to brilliantly lob Neil Sullivan from inside his own half.

The first of three glories

Arguably their greatest single season, United’s 1998-99 campaign saw them lose just three games in the Premier League, but they were still pushed all the way by Arsenal and Chelsea.

On May 16, 1999 – the final day of the season – Ferguson’s troops needed to hold their nerve against Tottenham Hotspur at Old Trafford, something they initially struggled to do as they trailed to Les Ferdinand’s superb opener.

But after David Beckham had smashed home the equaliser, up stepped half-time substitute Andy Cole, who, two minutes after his introduction, beautifully controlled Gary Neville’s lobbed pass, deftly juggled the ball back up into the air and stroked home over the head of Ian Walker to make it 2-1.

That goal saw United clinch the title ahead of Arsenal and in the following ten days, Ferguson’s men would go on to beat Newcastle 2-0 in the FA Cup final while also clinching the Champions League with that dramatic 2-1 victory over Bayern Munich.

There was something almost dreamlike about the way that United cruised to the Premier League title in 2012-13 season – they won a record 25 of their opening 30 games – but reality hit home hard on May 8, 2013.

Sir Alex Ferguson, Britain’s most successful manager, announced that he would be retiring, having led the Red Devils to 13 Premier League titles, two Champions Leagues and five FA Cups.

The league crown – United’s 20th top-flight championship win – had been wrapped up by Robin van Persie’s hat-trick against Aston Villa on April 22 and Ferguson signed off in typical style in his final match in charge.

THE LATEST RANGE OF MANCHESTER UNITED SHIRTS, TRAINING WEAR AND FAN-WEAR IS AVAILABLE TO PURCHASE IN STORE AND ONLINE. CLICK HERE TO SHOP NOW.