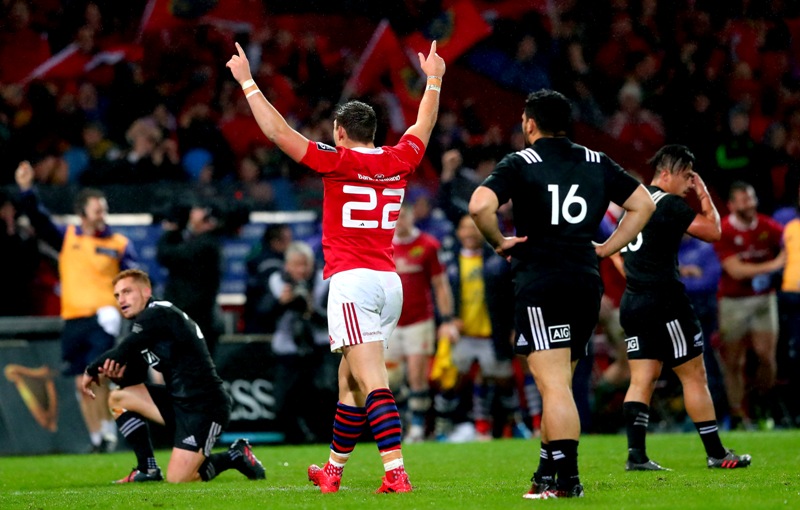 The magical night Munster beat the Maori All Blacks

After four intense games on the Lions Tour so far, the pressure does not let up on the British & Irish Lions as they prepare to face the Maori All Blacks on Saturday.

The Lions have two wins after successes against the NZ Provincial Barbarians and Crusaders but slipped to defeats against the Blues and Highlanders.

Arguably though, this weekend is an unofficial fourth Test against a side with plenty of All Blacks experience including Nehe Milner-Skudder, Liam Messam and Damian McKenzie.

And we’re big fans of the Maori All Blacks after their poignant match against Munster back in November where the Irish province were 27-14 victors at Thomond Park.

The Maori All Blacks began their Tour last autumn with a 54-7 win over United States Eagles in Chicago as James Lowe and Akira Ioane both grabbed two tries.

But even before kick-off at Thomond Park, a week later, head coach Colin Cooper admitted he was fully aware of the unique atmosphere of Munster’s famous old ground.

“The crowd is like an extra, the 24th person. They are very vocal and very passionate so it will be a challenge for us,” he said in the build-up.

“The people here are pretty passionate, and certainly people here know New Zealand and they know these players – they are very respectful people.

“I’ve always admired Munster from afar and now I’m going to be at the coalface of taking on Munster, it will be a great experience and opportunity to lead such good men like we’ve got.”

And there was a special moment before kick-off as four Maori players lay a special playing jersey in memory of the late Anthony Foley on the field ahead of the Haka.

In what was an emotional night, the move was fully endorsed by a vocal and sold out Thomond Park crowd and what followed was an inspired Munster performance.

Niall Scannell, Darren Sweetnam and Ronan O’Mahony all dotted down with a penalty try ensuring Munster a famous victory as they outscored the Maori All Blacks by four tries to two.

And the size of the Munster achievement was further underlined when the Maori All Blacks beat Harlequins 26-10 the following week to end their tour on a positive note.

Munster led the way; let’s hope the Lions can follow on Saturday.