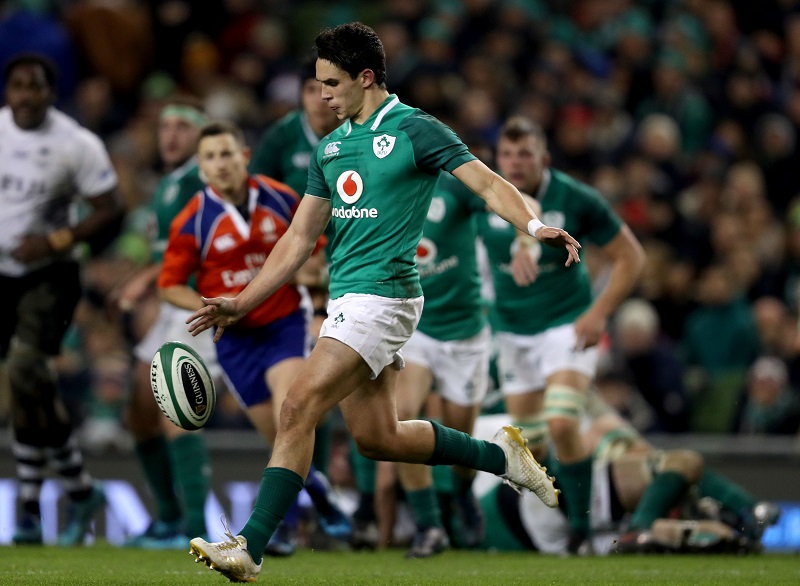 The new year is almost upon us and Leinster fans won’t have long to wait before seeing their side in action in 2018.

That’s because another inter-pro derby awaits, with Connacht the visitors to the RDS Arena on New Year’s Day, with Leo Cullen’s side on a strong run of form after going unbeaten through December.

But with 2017 soon to become a thing of the past, we’ve taken a look at which stars have shone brightest over the year – and which names for which big things are expected over the next 12 months.

Such is the way Joey Carbery carries himself on the rugby field, you’d have thought the 22-year-old would have been around for years.

But, after making his international debut against New Zealand in 2016, the utility back has taken his rugby up a notch over the subsequent period.

Top scorer for Leinster last season with eight tries, Carbery was named as the league’s young player of the season, with his Champions Cup performance against Wasps a particular breakthrough moment on the biggest stage.

He carried that form into this season too, quickly becoming a staple part of Leinster’s plans before returning to the Ireland fold for the autumn internationals.

It was to end prematurely, fracturing his wrist against Fiji, but that didn’t stop him catching the eye of Joe Schmidt with yet another assured display, maturing each time he dons a green or blue jersey.

An embarrassment of riches is the only way to describe Leinster’s back-row options at times but in Dan Leavy, they have flanker worth his weight in gold.

Named in the team of the season last year, it’s the consistency of performances that have caught many an eye for the 23-year-old, who seemingly never puts a foot wrong in any outing that comes his way.

That included him getting the nod in Leinster’s big European outings – a sure-fire vote of confidence if ever there was one.

Injury plagued the autumn of a man already an international with Ireland but Leavy has been desperate to make up for lost time – as any up-and-coming star should be.

That’s easy to put into words but Leavy has shown himself to be more than just talk, producing the big moments for the even bigger occasions, notably blunting Munster’s rampant comeback to ensure Leinster ended 2017 with a victory on St Stephen’s Day.

Leavy was not the only member of the Leinster playing staff in last year’s team of the season – he was joined by No.8 Jack Conan amidst a back three that has simply blossomed.

Outstanding performances have become commonplace for the 25-year-old, with many feeling it is only a matter of time before the Ireland jersey becomes his for a prolonged period of time.

A hat-trick against Montpellier in the Champions Cup in January only enhanced that opinion, a performance to tell the RDS Arena fans what he is made of.

Coming through the province’s academy has clearly held its benefit for Conan, who is set to ensure 2018 can be as memorable as the past year in blue.

To have your head coach calling your score ‘as good as a try as I have seen’, you must be doing something right.

But that was what besotted Jordan Larmour as recently as last weekend and if Leo Cullen is to be believed, this youngster has a massive future ahead of him.

With Munster piling on the pressure and the ball swirling in the air, the full-back firstly gathered a high catch superbly, weaved his way around countless tackles and then – to top it all off – held off Simon Zebo to seal Leinster’s win against their rivals with a try-of-the-season contender.

One moment doesn’t create a key player but this is a man who has been on the radar for some time, threatening exactly this when part of the Ireland age-group system.

The Guinness PRO14 now know what he is capable of, so the challenge will be to replicate these impressive displays – a task he looks in a strong position to face head on.

An impressive string of performances for A side saw Conor O’Brien make his debut for Leinster against Glasgow Warriors last month, a senior team bow in one of the biggest games of the season.

A graduate of Leinster’s ever-bustling academy, the centre is one of a number of bright sparks in the side but his place among the province’s heavily credited backs could bring out the best in him.

An admirer of Joey Carbery, O’Brien is still only 21 and certainly has a lot still to offer, both in the way of performance and development.

But with the taste of the PRO14 now on his tongue, he’ll be desperate to ensure that 2018 is his year to shine.

A hotshot who slipped under the radar on his immediate arrival from New Zealand, big things can be expected for James Lowe in 2018.

A wing or full-back, getting into the team could be the biggest task in itself but once there, Lowe has already shown glimpses of his capabilities.

In fact, his Leinster debut was certainly one to remember earlier in December, putting in a telling man-of-the-match display with two tries in a confident outing against Benetton Rugby.

A fans’ favourite during his time with state side Tasman, as well as with Chiefs in Super Rugby, the 25-year-old could be the perfect fit for a side who seem to love scoring tries for fun in whatever competition they play.

THE LATEST RANGE OF MUNSTER AND LEINSTER RUGBY JERSEYS, TRAINING WEAR AND FAN-WEAR ARE AVAILABLE TO PURCHASE IN STORE AND ONLINE. CLICK HERE TO SHOP NOW.