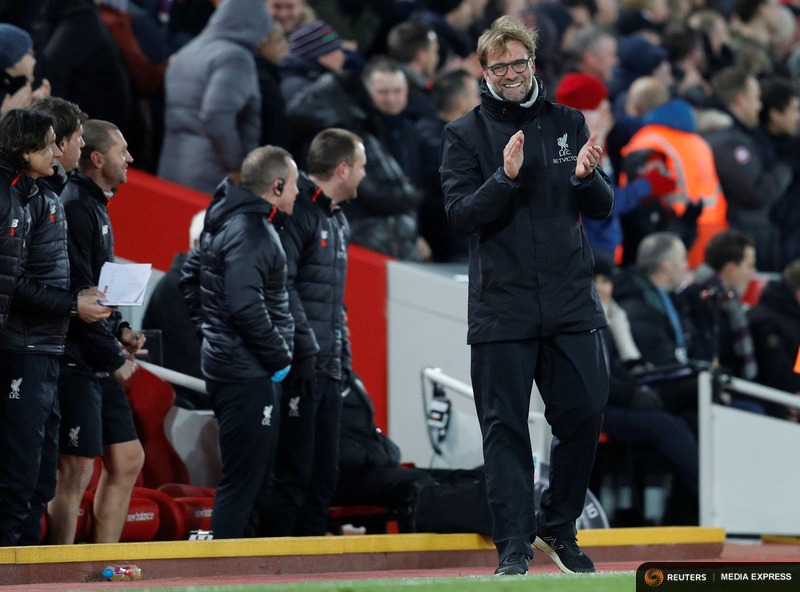 Liverpool v Man City: Which stars will make the difference?

The fixture list has thrown up a New Year’s treat on Saturday as Liverpool and Manchester City do battle at Anfield – in a game which could have major ramifications on where the Premier League title ends up in May.

The Reds, who look revived under Jurgen Klopp this season, have won 12 of their 18 league matches and sit second in the table – six points off leaders Chelsea at kick-off.

Yet for City boss Pep Guardiola, this may be an even bigger game – with strong questions being asked of his side’s defence, which has kept just five clean sheets all season.

Here we take a look at where this mammoth game could be won and lost, and who could make the difference.

Klopp: “If I wasn’t sitting on the bench, I would buy a ticket for #LIVMCI 100 percent.” pic.twitter.com/6UiwPBVHK2

In contrast to their rivals, Liverpool lack a world class centre-forward – with Klopp opting for Sadio Mane and Adam Lallana alongside ‘striker’ Roberto Firmino.

The Brazilian, who joined the Reds from German side Hoffenheim for £29m last year, may not be a typical number nine – but he has still delivered the goods and has history with City’s porous backline.

Firmino recently said his small physical size is not a hindrance in a stereotypically robust league, and his stats back that up with seven goals so far from 19 appearances in all competitions.

Liverpool will fancy their chances of beating Pep’s City and history is on their side. Last season they beat City 3-0 at Anfield – with Firmino scoring their third in a comprehensive win.

Firmino also netted against City in a 4-1 win away from home last season, showing he is a man for the big occasion – and Klopp is relying on him to do the damage again.

Carragher: “I think if you asked Klopp who his most important player is, I think he’d say Roberto Firmino. He does the things others don’t.”

In contrast to Liverpool’s blood and thunder style, City are a silky smooth side – typified by the style and quality of David Silva.

The Spaniard may not score as many goals as he did but Guardiola described him as one of his most important players earlier this season – and he has been ever-present, making 21 appearances in all competitions.

Silva has been at City for over six years, joining from Valencia in 2010, and remains a key cog – with his vision, composure and technical quality standing him out from the rest.

Now 30, Silva has dropped a little deeper into City’s midfield but his impact has not lessened with the likes of Kevin de Bruyne, Raheem Sterling and Sergio Aguero all reaping the benefits from his creativity.

Silva is one of just a handful of players to have won the World Cup and European Championships, and he often excels in big games – leading Liverpool boss Klopp to describe him as a “wonderful player” earlier this season.

The Reds manager will hope that Silva has his mind elsewhere on New Year’s Eve.

Could this be the game where Daniel Sturridge puts himself firmly in the shop window ahead of the January transfer window?

The England striker’s place seems to be on the bench at Anfield, with Klopp preferring the dynamic and fluid frontline of Firmino, Mane and Lallana.

Yet Sturridge keeps finding ways to show off his undoubted quality, as Everton found to their cost in the Merseyside derby before Christmas, where he set up Mane’s late winner with a shot that cracked the post, before scoring in the 4-1 win against Stoke.

With this match expected to be tight, Klopp is likely to call upon the former City striker at some point – and a player of his quality in front of goal could make all the difference.

Sturridge has been linked with a move away from the Reds next month, with a player of his quality unlikely to settle for a place on the bench for too long.

And with the hype surrounding this match, Sturridge will know plenty of potential suitors are watching.

Another player set to face his former club, Manchester City’s Raheem Sterling is guaranteed a vocal reception by Liverpool supporters – many of whom are still angry at the way he left the club in 2015.

Sterling’s career has not blossomed as expected at City, but there are signs under Guardiola that he is set to realise his vast potential.

The winger enjoyed a fine start to the season, scoring five goals in City’s first ten games in all competitions before falling victim to Guardiola’s rotation policy as the club’s form dipped.

But Sterling looked sharp against Arsenal before Christmas and scored the winner by flashing in a low drive past goalkeeper Petr Cech.

Liverpool are supposedly weak in the wide areas, with Klopp preferring midfielder James Milner at left-back, and Guardiola will trust Sterling to exploit his former England teammate.

The 22-year-old will need a thick skin to deal with a hostile Anfield but it is the sort of game he could thrive in, and re-assert himself as one of the best young talents in European football.

YOU CAN SHOP THE LATEST LIVERPOOL JERSEYS AND MAN CITY FOOTBALL SHIRTS ONLINE WITH YOUR FAVOURITE PLAYERS NAME ON THE BACK.