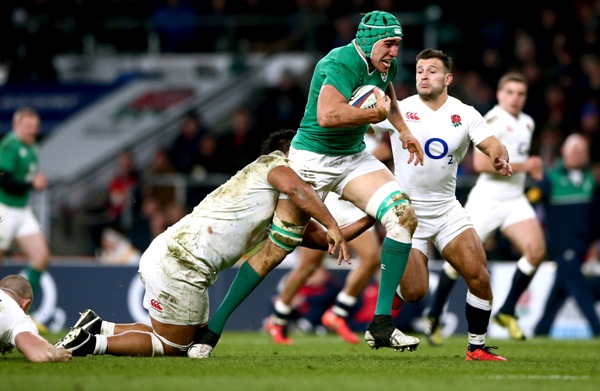 Ireland’s slow start to the Six Nations might have been a real frustration to many with no wins from the opening three games, but with no title to play for, Joe Schmidt has the opportunity to try out some new players.

While Stuart McCloskey and Josh van der Flier have at least been on the radars of those keen followers of provincial rugby, there were few outside Connacht who knew of Ultan Dillane.

The 22-year-old second row was included in Schmidt’s initial squad, and in the absence of the injured Iain Henderson and then Mike McCarthy, he was named on the bench for his first cap against England on Saturday.

He certainly made an impact, with one busting run almost setting up the Men in Green for what might have been a crucial try as they attempted to mount a comeback.

It wasn’t to be, but was certainly an eye-catching entrance for the young lock.

That was enough to earn some praise from Schmidt, and while Ireland are not short of options in the second row, Dillane looks like he’s here to stay.

Schmidt said after the game: “Ultan came on, pinched a lineout, made a linebreak and really put himself about. He’s a big strong kid and he’s still learning the game.”

The question is, how has Dillane made such a rapid progression through the Irish ranks.

Well the 22-year-old is now tied to Ireland by virtue of Saturday’s appearance. Otherwise he could have been snapped up by France, having been born in Paris.

The son of an Ivorian father, he spent the first seven years of his life in France, before moving over to Ireland and Tralee, the home of his mother.

Nigel Carolan, the current Ireland Under-20s coach and then Connacht academy manager, spotted him as a youngster and convinced him to come to Connacht three years ago.

Even so, his rise has been remarkable. He only made his full Connacht debut last season but Ireland forwards coach revealed that Dillane had caught the eye almost immediately.

“Speaking to Jimmy Duffy and Pat Lam at Connacht, they’ve been really happy with his progression.

“He’s a pretty physical animal, if you’ve seen him tackle. He hits rucks, he scrummages well, he’s very powerful in the gym.”

Dillane is likely to return to club action this week with Connacht, but if the current signs are anything to go by, he has a long future in store at international level.