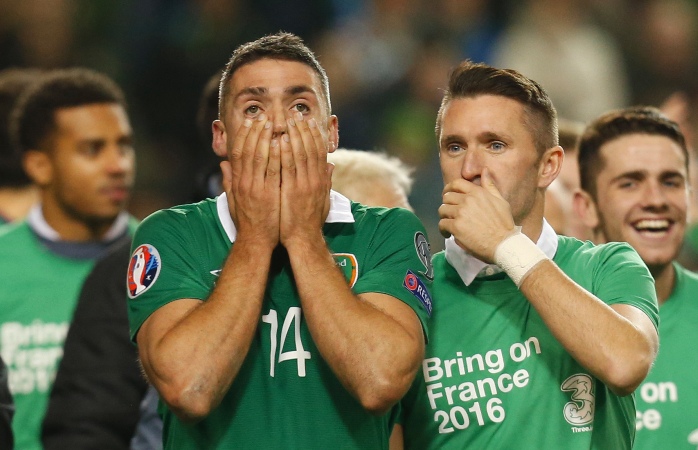 Jonathan Walters is the man of the moment, the hero of the hour, Ireland’s superman – just don’t tell him!

The Stoke star was the coolest man in Dublin last night, scoring the two goals to defeat Bosnia & Herzegovina and send Ireland through to the European Championships finals in France next summer.

The 32-year-old has experienced quite the turn in fortunes in recent weeks.

All set to leave Stoke in the summer window with the Potters unwilling to offer him anything more than a one-year contract, a proposed move to Norwich City fell through.

But, in typical Walters fashion, he knuckled down, proved his worth and was rewarded with a two-and-a-half year deal.

His future sorted, Walters won the day for his country but has no intention of lapping up such plaudits.

“There were some excellent performances all over the pitch and in other games.

“If I’m lucky enough to play I’ll always put a shift in and always try to get myself into the right position to score, and it has come off.”

Now it’s all eyes on next summer, where Walters and Co will be desperate to improve upon their Euro 2012 campaign in which they returned from Poland without a point.

But they did have the misfortune of an extremely difficult group three years ago and Walters hopes Irish eyes will be smiling after the group-stage draw on December 12.

“We had Spain, Italy and Croatia, so it was some group,” he added. “But to have had that and now have the chance to play on that stage again is sweet.

“It’s what we have played for for the last two years.

“There have been difficult times and ups and downs, but we got there in the end.”