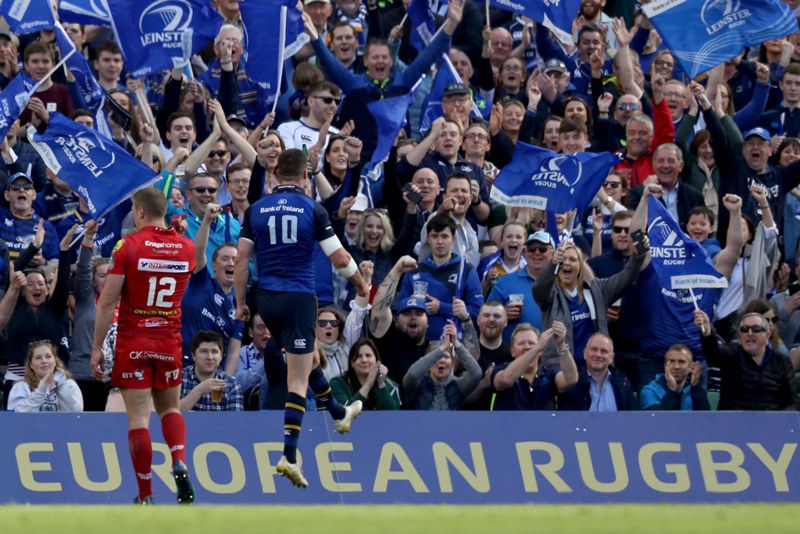 A delicious Champions Cup final is on the horizon as Leinster and Racing 92 travel to Bilbao to go head-to-head for European glory.

As next month’s final at the San Mames Stadium nears, we take a look at the three biggest threats from both teams to analyse what they each have to offer.

Leinster’s all-time top points-scorer in the Champions Cup ever wiht 549, Jonny Sexton was immaculate from the tee and inventive with ball in hand, terrorising the Scarlets defence in semi-finals.

The fly-half was central in Ireland’s Grand Slam victory in the Six Nations, leading the line and controlling each match not only with his decision-making with ball in hand, but also with his boot to keep the scoreboard ticking over in crucial games.

Having been on two British & Irish Lions tours, Sexton has played against and beaten the best that world rugby has to offer, so he won’t be overawed by a Champions Cup final in Bilbao.

Racing, on the other hand, have reached this stage for only the second time, having lost to Saracens 21-9 in their only previous final in 2016.

Long-term internationals Cian Healy and Scott Fardy both scored crucial tries against Scarlets in the semis, showing that experience at the highest level decides games.

Led by Jordi Murphy and James Ryan, Leinster were relentless against the Welsh.

They enjoyed 71 per cent territory in the first half and a lot of that was down to the way they protected the ball.

They stifled the Scarlets attack at the breakdown and dominated possession, not allowing the Welsh outfit to gain any momentum – and they have played like that all season, topping the Guinness PRO14 Conference B and securing a home semi-final in the Final Series play-offs.

These outside backs were at their deadliest against Munster and tore the Irish outfit apart in the first half.

Thomas could have had a hat-trick inside 35 minutes but generously passed to Maxime Machenaud, although the credit for the score will all be the winger’s.

Throughout the season, the pair have been destructive and Top 14 teams have struggled to cope with their sheer pace and power – it will take all of Leinster’s energy to defend against their fearsome, fast-paced fluidity with ball in hand.

Undoubtedly the best offloader in the world, he has made 20 for Racing in the Champions Cup – no other finalist has even made double figures.

The lock also has four tries in eight matches, has made 111 carries (the second-most in the tournament), beaten 22 defenders (the most out of any finalist), and is also in the top five for most line-outs won.

It’s not just his stats that make the Fijian stand out.

His athleticism for a man of 6ft 6in is phenomenal. Combined with his speed and, most importantly, his rugby brain, he is the perfect forward and will be near-impossible to keep quiet on May 12.

The Parisians have the best defensive record in the Top 14, only conceding 465 points this season thanks to their dogged work at the breakdown and organised line.

In the pool stage of the Champions Cup, only Munster conceded fewer tries, and from the knockout stage onwards, Racing only let in four.

As Racing displayed in their 28-17 quarter-final win over Clermont and the 29-22 victory over Munster, they can absorb the pressure and suffocate teams to grind out a win when it’s most important, which will come in extremely handy in Bilbao.

THE LATEST RANGE OF LEINSTER RUGBY JERSEYS, TRAINING WEAR AND FAN-WEAR IS AVAILABLE TO PURCHASE IN STORE AND ONLINE.