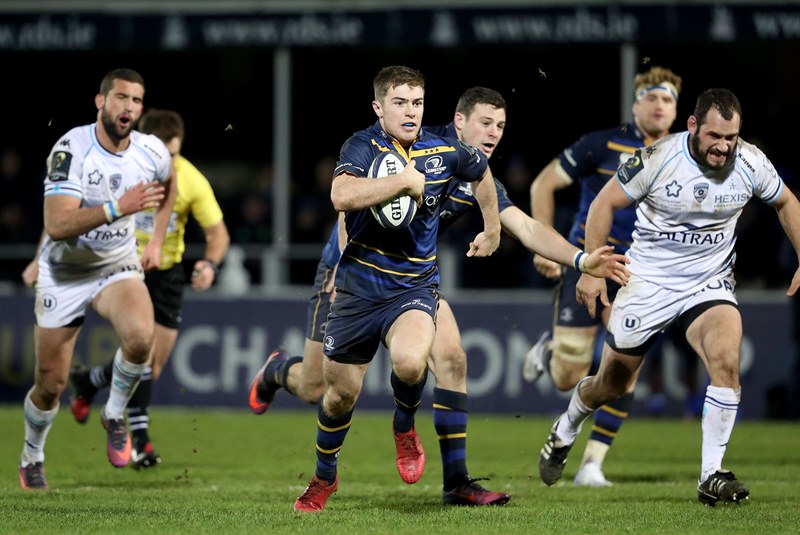 Two titans of European rugby come together this weekend as Leinster welcome Montpellier to the RDS Arena in the opening round of the 2017/18 European Rugby Champions Cup.

The huge games come thick and fast for Leo Cullen’s men, who follow up last weekend’s 23-17 Guinness PRO14 win over Munster with Saturday’s match against the French giants.

The Dublin-based province are going well in the PRO14 with five wins from six, but Montpellier are also in fine form and sit third in the French Top 14 table.

With the arrival of Vern Cotter’s team to the shores of Ireland, we take a look at Leinster’s best performances against French clubs in recent years.

Back in Leinster’s golden era and attempting to retain the then Heineken Cup trophy, they matched up against Clermont in a quarter-final that didn’t disappoint.

An irrepressible Malzieu completed his hat-trick midway through the second half – but Leinster roared back with two Johnny Sexton penalties doing the damage and James unforgettably missing two late drop-goal attempts that could’ve stolen the game.

Fast forward two years and James’ Clermont had the perfect opportunity for revenge against Leinster and Brian O’Driscoll in his pomp – this time in a semi-final on French soil.

The men from the Auvergne boasted the likes of Sitiveni Sivivatu, Wesley Fofana and Davit Zirakashvili in their ranks but went behind to a Sexton penalty before James responded with four of his own.

After the break the visitors took the initiative, with Rob Kearney’s scything break setting up Cian Healy for a try – the full-back then landing a booming drop-goal from distance that gave his side a 16-12 lead.

Australian James got a fifth penalty but Sexton responded, Fofana was then adjudged to have spilled the ball over the try line at the death, leaving Leinster to set up an all-Irish final against Ulster.

We don’t have to look far back to find the last time Saturday’s opponents faced off against each other, with the pair being drawn together in the pool stages of last year’s European Champions Cup.

Towards the end of 2016 Montpellier ran-out 22-16 winners at Altrad Stadium, with Leinster picking up a crucial bonus point, but at the RDS in January the French side were ruthlessly put to the sword.

Isa Nacewa and Jack Conan scored early tries before Frans Steyn was shown a red card for a tackle on Sexton – Conan went on to complete his hat-trick, adding to scores for Adam Byrne, Luke McGrath, Cian Healy and Garry Ringrose that completed the rout.