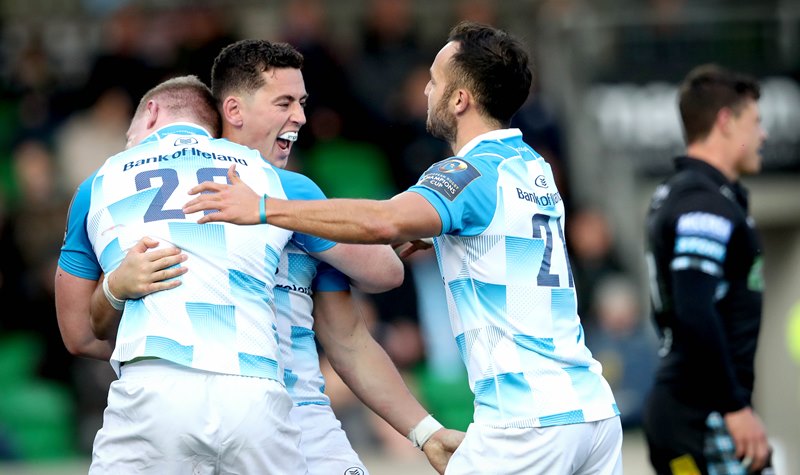 Leinster travel to the reigning Premiership champions Exeter Chiefs this weekend looking to maintain their unbeaten start in the European Champions Cup.

The three-time winners face the Chiefs in consecutive weekends this December in two big clashes which could decide which of them qualifies from Pool 3.

Leinster had the perfect start to the new tournament with a bonus-point 24-17 win over Montpellier at the RDS Arena back in October.

Joey Carbery and Josh van der Flier went over before the break with Robbie Henshaw and Barry Daly crossing to secure the full five points despite Adam Byrne’s late sin-bin.

In Round 2, Leinster went to Glasgow Warriors and secured their second win with a 34-18 success, scoring another four tries in the process.

What about Exeter Chiefs?

The reigning English champions also have two wins from two after a 24-15 win over Glasgow in Round 1 followed by a 27-24 win away in France.

Their recent form, which has seen them top the Premiership table, isn’t bad either with six straight wins in all competitions heading into Europe.

Leinster have a near-perfect bill of health for the back-to-back European fixtures with Garry Ringrose, Mick Kearney and Josh van der Flier all returning against Benetton last week.

Dan Leavy remains a slight doubt due to a tight hamstring while Robbie Henshaw continues to be monitored after a niggle ruled him out of Ireland’s match with Argentina.

James Ryan continues to recover from a shoulder knock picked up in that international match at the Aviva Stadium and will be assessed throughout the week.