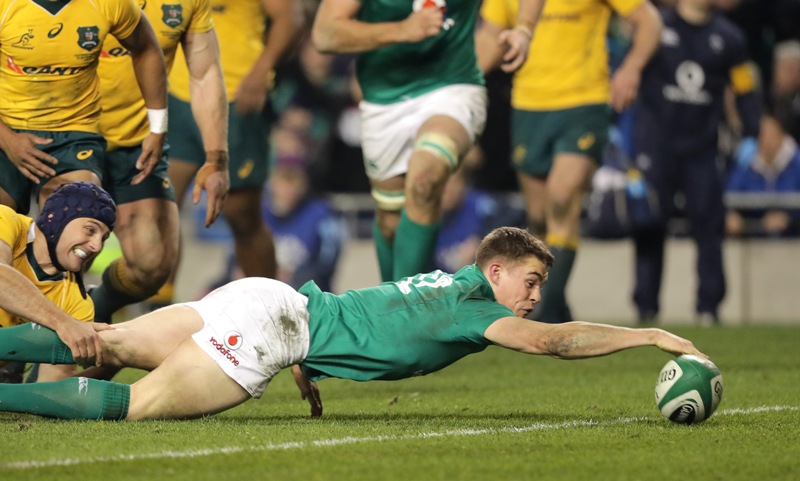 It was certainly an autumn to remember for the Irish as they followed up their historic win over New Zealand with stunning victories over Canada and Australia.

The Men In Green may have lost the re-match against the All Blacks in Dublin but that couldn’t take the gloss off a fantastic year – one which has seen them beat all of the ‘big three’ for the first time.

With Rory Best leading from the front, and winning his 100th Ireland cap against Australia at the weekend, there were countless stand-out performances across the four weekends of action.

But here’s three who may have just forced their way a little higher up in Joe Schmidt’s mind after making a serious mark on the international stage for the first time.

A day I’ll never forget. Made even more special knowing my family and friends were there in support ??

After making his debut in the 52-21 victory over Canada, the Leinster centre came off the bench against New Zealand before scoring a try in his second start against Australia.

He is only 21 but has already courted comparisons – his try in particular – with Ireland great Brian O’Driscoll which gives some idea as to the quality of his recent performances.

In addition to his try, Ringrose beat four defenders, two more than any other Ireland player, against Australia to go with the three he beat against Canada where he also made two clean breaks.

And he also showcased his versatility against the Wallabies, playing in a slightly unfamiliar role of inside centre in place of the injured Robbie Henshaw.

Man of the match Josh van der Flier: I was gutted for Seanie but delighted to get to play https://t.co/uOpk9SjxjO

Man-of-the-match against Australia, Van der Flier will be extremely difficult for Joe Schmidt to ignore after two strong substitute appearances against New Zealand.

The flanker was only brought in to start in the absence of Sean O’Brien but made his mark with ten tackles made without missing a single one.

The 23-year-old only made his international bow against England in the 2016 Six Nations but is now being touted as a potential Lion.

While Ireland have plenty of depth in the back row, Van der Flier showed enough off the bench, and then when starting, to indicate that Joe Schmidt has another gem on his hands on the flank.

When Furlong walked out with the Ireland team in Chicago, it was only his second international start, but by the end of the autumn series, he had plenty of admirers.

He’s up to 11 international appearances now and at 24 years old has plenty of time to develop, however his ball carrying, his drive in the scrum and generally smart set-piece has impressed many.

Could the Leinsterman make the plane to New Zealand this summer?

“The Lions is synonymous with such a big brand and so many great players have played there. Do I see myself there at the minute? No,” he said.

While he may be right that a Lions tour could come too early, the way he brushed aside the likes of Brodie Retallick and Kieran Read on one particular bulldozing run against the All Blacks indicates that he might not be too far off.

Tadhg Furlong goes on the rampage.

Franks, Retallick, Read all left on the ground. pic.twitter.com/kz3gtQ6FaO