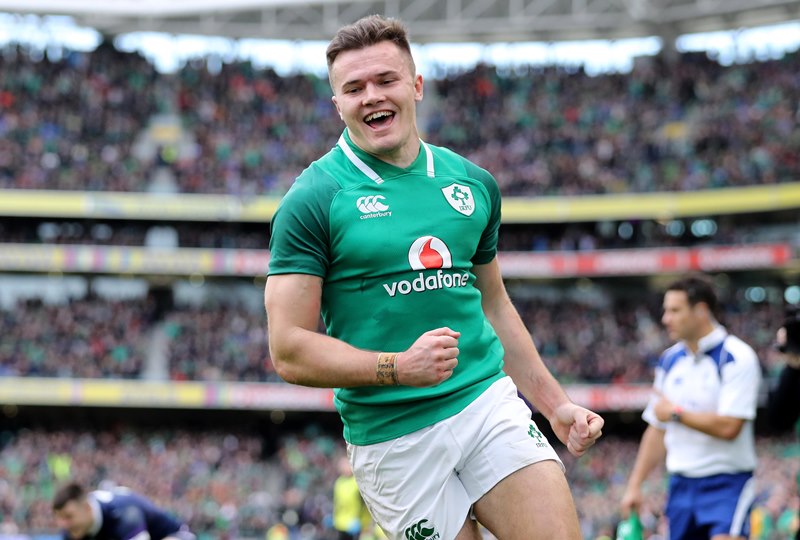 Ireland’s stars of the Six Nations so far

Irish eyes are smiling – and how.

With a 28-8 success over Scotland last weekend coupled with England’s defeat at the hands of France, Joe Schmidt’s class of 2018 became Six Nations champions and they have the opportunity to write their names into folklore as they chase a historic Grand Slam.

Victory over England at Twickenham next time out will turn this into a historic campaign but it’s already memorable nonetheless, so we’ve picked out our three standout Ireland star so far.

Key players are built to shine when the chips are down and Ireland wouldn’t be toasting life as Six Nations champions right now were it not for Johnny Sexton’s decisive turn back at the start of February.

In the third minute of added time, the British & Irish Lion kicked a dramatic 45-metre drop goal to hand his team a 15-13 victory over France in Paris and Sexton has been a regular point-scorer with the boot during the entirety of the championship so far.

As well as dictating play time and again for Ireland, Sexton has also been a key defensive cog for Schmidt’s side, highlighted by the part he played in helping to prevent Scotland’s Huw Jones from finding Stuart Hogg for what would have been a certain try, the fly-half showing patience and intelligent body shape to force the rampaging centre into a misplaced pass.

Jacob Stockdale has heartily filled his boots during the 2018 Six Nations, leaving records tumbling in his wake.

The Ulster star has become the first Irishman to score six tries in a single championship while the third successive try double he bagged against Scotland helped him equal a 104-year-old record.

The powerful Stockdale has firmly established himself in Schmidt’s starting XV and he has just eight caps to his name so far, yet already, there are just 20 players that have scored more Test tries for Ireland.

Lock James Ryan, a former Ireland captain at Under-18 level, has been described by teammate Stockdale as a natural leader.

The 21-year-old Leinster man has helped knit Ireland’s pack together and his handling ability has been a joy to watch in recent weeks.

The 17-stone ace was also Ireland’s top ball-carrier during that crucial Scotland success – the self-styled ‘big Cheese’ has made a big impact.