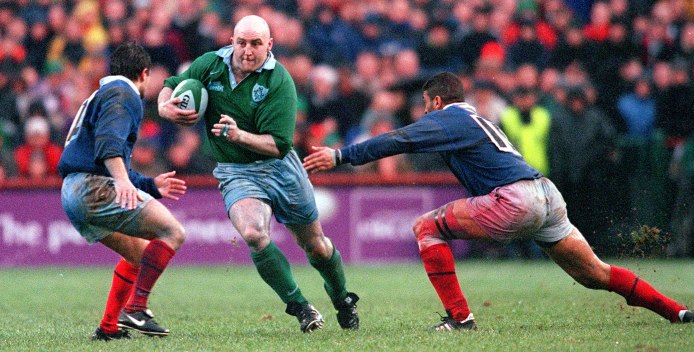 With the Rugby World Cup on the horizon, and Joe Schmidt having announced his 31-man squad, fans across Ireland will be busy debating as to which star in green will stand out. And if any of Schmidt’s troops need any inspiration, then all they need to do is look back through history at some of those who have answered Ireland’s call in the past.
We will profile just three of a very long list of players who have done exactly that, with Keith Wood following hot on the heels of Brian O’Driscoll yesterday. And while you’re with us, ensure you are kitted out for the Rugby World Cup and click here to visit our online store.

For Irish rugby fans there are few milestone memories from Rugby World Cups as the men in green have often fallen just short on the big stage.

Never have Ireland made it past the quarter-final stage at rugby’s biggest tournament but in 1999 Keith Wood wrote his name into the record books.

The Irish hooker became the first, and so far only, front-row forward to score four tries in a World Cup game as they beat USA at Lansdowne Road.

Always solid in the set-piece, it was in the loose that Wood really excelled as a hooker of world-class reputation and that game against the Americans was a perfect example of what he brought to any side he played in – although he himself would admit all four tries were close-range efforts rather than halfway line breaks!

Be it at Harlequins, Munster, the British & Irish Lions or the green jersey of Ireland – a country that Wood appeared for 58 times in an illustrious career – you could always back Wood to give his all.

He started his career with Garryowen who he helped to All Ireland titles in 1992 and 1994 before moving to Harlequins.

His international debut came that same year and Wood would go on to dominate the hooker position in world rugby.

No No.2 has ever scored more than his 15 international tries, he played on the 1997 and 2001 Lions tours, and was the inaugural winner of the IRB World Player of the Year award in 2001.

Wood, now 43, announced his retirement after the 2003 World Cup, as Brian O’Driscoll inherited the captaincy, but there are few who do not still fondly remember the distinctive bald head of Wood, giving his all for his country on the big stage.

Life Style Sports is backing Ireland this year to become world champions and create their own piece of Irish sporting history. The new range of Irish Rugby jerseys and training kit is now available in-store and online to purchase. Click here to show your support. Together#ForVictory.